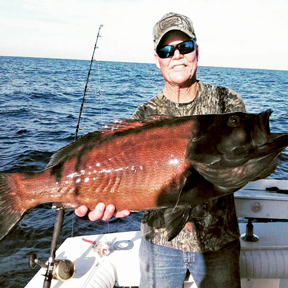 The Montauk Friends of Erin and the East Hampton Kiwanis Club have selected Captain Skip Rudolph, of the charter boat Adios, to be awarded this year’s title of Montauk Fishing Legend. He will be honored during their annual Montauk Mercury Grand Slam Fishing Tournament, which takes place on July 16 and 17, at Uihlein’s Marina in Montauk. Captain Rudolph will receive his award on Sunday, July 17 at 6 pm in a special ceremony at the marina, where they will also have a band and refreshments on hand and the public is invited to attend. Other awards will be given to the winning fishermen in the contest, in different divisions. 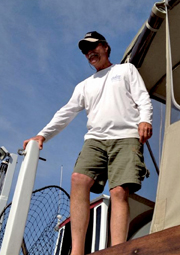 Captain Skip Rudolph, 67, lives in Montauk with his wife, Vicky, and his two daughters, Delia, 33, and Rosie, 25. He has had a long career fishing the waters from Florida and the Caribbean to Montauk. He grew up at Baker’s Haulover Marina in North Miami Beach, and got “hooked” on fishing as a child, helping his Dad who owned two different party boats, the first one a 55-foot Norseman, and the second one a 65-foot Gilliken.

“I was my father’s slave,” he joked. “I went out with him every chance I got. My parents said I had to keep a grade in school of 70 or above in order to go out with him on weekends. I baited hooks and tied rigs…I was twisting wire leaders by the age of seven. My first time getting paid was at age seven, getting two bucks an hour for maintaining and rebuilding fishing reels.”

The first fish Rudolph caught was a 20-pound Bonita. By the time he was 17, he was helping a mechanic rebuild engines. At 19, he got his captain’s license, passing on the first try. “And there was no sea school back then, I had to study each book the Coast Guard put out,” he said. “My Mom wanted me to go to college, but I said ‘Save your money,’ because I knew what I wanted to do.”

The morning after he got his captain’s license, he got his first job, ironically, from his Dad’s competitor, aboard the 65-foot boat, The Hurricane.  “I loved it,” he said. “I ran the afternoon and night trips.” Still living in North Miami Beach, he ran it for two years, and then went to run a tour boat in St. Thomas, Virgin Islands. On the weekends, he worked for different boats catching blue marlin, sometimes seeing eight in a day!

Homesick for North Miami Beach, he came back and worked on his Dad’s boat, catching king mackeral, bonitas, snappers and groupers. But Miami Beach had been changing, with many motels converting to condos, which decreased the tourist business. After three years, his Dad sold his boat, and Captain Skip started working for Captain Joe Ritzi, of Montauk, who was in Florida with his boat, The Gannett, which he bought from Capt. Frank Tuma, Jr.  “Joe was taking the boat back to Montauk, and he needed a mate, and I decided I needed a change of scenery, so I came to Montauk and started to work on charter boats, starting with the Gannett,” said Skip. 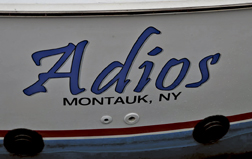 Next he went to work for Capt. Phil Lewis on the charter boat Adios.  “Phil and I were a killer team in the early 80’s,” he said. “In one season we caught 33 giant tunas. The biggest was 937 pounds, off Block Island, in 80 feet of water. Phil taught me a lot about fishing,” said Skip. “When the fish would sometimes come off the line, he would say, “The fish gotta win once in a while.”

He fished with Phil Lewis for six seasons, and spent winters fishing tournaments on private boats. He also fished for five years for Arnold and Bonnie Marcus on their 54-foot boat, Striker,” doing Canyon fishing, and caught a 662-pound blue marlin in the Star Island Tournament. In 1999, when Phil Lewis died, he took over the Adios charter boat, rebuilt it, and runs it to this day.

Along the way, through his many years of fishing, Skip Rudolph met his soulmate, the former Vicky Ridgway, whose mother, Phyllis Ridgway, was an avid fisherwoman who held the New York State Women’s Angler Record. Vicky’s father, Dick Ridgway, was a boat builder and captain. Vicky’s godparents were Captain Phil Lewis and his wife Dina. It all came together.

Henry Uihlein, owner of Uihlein’s Marina and a member of the East Hampton Kiwanis Club, said Skip is very deserving of this honor.  He has followed his passion for this industry, and spent his whole life on the water,” he said. “Skip is an example of a person doing his best, with what he loves the most. He has contributed to the success of the Montauk fishing community.”