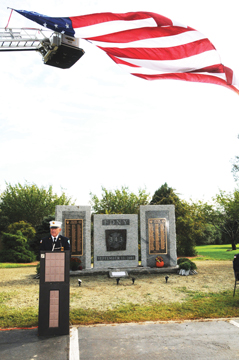 Hello and welcome to this month’s edition of the Montauk Fire Department Corner. I hope everyone had a safe and fun Columbus Day holiday weekend and Halloween. The Montauk weather has been fantastic, and I trust everyone has been enjoying it. However, soon we must expect the weather to turn cold and I want to caution everyone to drive safely in the snow/icy conditions.

On September 11th the Montauk Fire Department, along with our brothers and sisters from surrounding Fire Departments, held a memorial service at Hook Mill in memory of the twentieth anniversary of the attacks on the World Trade Center, Pentagon, and in Pennsylvania. I would like to thank all who attended this solemn event. I am sure you feel as I do that it’s hard to believe that it has been 20 years since this horrific attack, but the words “NEVER FORGET” ring as true today as in 2001. Here is Honorary Chief Richard Lewin’s photo of Chief Richard Schoen hosting the 2011 “9-11 Monument Dedication” at the MFD Firehouse.

On Friday, September 24th, Company Nos. 2 and 6, along with wives, friends and family, had dinner at Gosman’s restaurant. It was a nice chance to get together after the hectic summer, and everyone had a nice time.

Also, on Saturday, October 16th the Montauk Fire Department participated in the East Hampton High School Homecoming Parade on Long Lane. I would like to thank MFD Firemen Justin Raynor and Kevin Reilly for representing the MFD to help root for the Bonackers.

In closing I would like to thank The Montauk Sun once again for affording us this venue to keep the public up to date about what is happening inside and out at the Montauk Fire Department. Their support is sincerely appreciated.

That’s it for this month. Enjoy the rest of this good Montauk weather, and we will be back again next month.