Howdy folks. I’d like to pick up from where we left off from last month’s discussion about the East Hampton Village Nature Trail, its residents, and a new threat that was recently dealt with. Last month we discussed the Nature Trail and how all the animals lived quite harmoniously. I explained how waterfowl do very well during the winter months and about the domestic waterfowl that get dropped off from time to time. 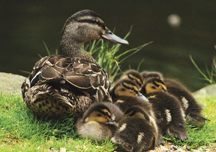 I’d like to begin by adding that, as often as all these domestic birds are dropped off, most all are adopted at the beginning of spring (last freeze). I’ve thought about this long and hard and did a bit of research on the subject, and my theory is pretty tight. I figure these small farm flocks get dropped because of the obvious benefits at the duck pond. Again, plenty of shelter, daily feed and available running water due to the drain. This is key, because most farms have either a standing pond, water hole or tank for their waterfowl. These would freeze without aeration or movement so, the duck pond is a great temporary stay alternative. But most of all, there is one extra benefit at the Nature Trail that applies to all the different species, and that is the lack of predation.

Sure, there is a circle of life / food chain operating within the Nature Trail Park, but what most folks would consider abundant natural predation opportunities, here at the Nature Trail it’s just the opposite. As many hawks and owls that populate the Nature Trail, I’ve only seen one Cooper’s hawk take an adult Mallard duck in my entire lifetime. I’ve seen only one fox more than 6 years ago passing through. Sure, ducklings and eggs take the worst hit, but the culprits are mostly snapping turtles and seagulls. I’ve seen more human impact / mischief related animal deaths in the park (ducks with arrows through them, tranq. darted dead deer, etc.), then I have seen predation. That is why I was shocked and disappointed when I heard about this organization from up island who was “fowl-napping” our Nature Trail ducks in an effort to “SAVE THEM”.

The organization is, Long Island Orchestrating for Nature. I did speak to their founder and president on a public social media post. I asked him why he was taking the animals from the paradise at the Village Nature Trail. He replied “The wild is not paradise and a park is not a “safe haven” for a domestic duck…”. With that comment I immediately knew he had no knowledge of the Nature Trail at all. When I explained that he was mistaken, and these animals had been welcomed guests for nearly a century without issue, he replied, “If this is a regular occurrence at this location, action should be taken to prevent it for the sake of the domestic ducks and the wild ducks that live there.” Since then, his crew has come to the Nature Trail, stressed out the entire duck population through chasing, netting and transporting away several of our beloved nature trail residents. They didn’t even have the respect to contact any of our own local wildlife groups. They just came into our town from up the island, and started taking our NT residents. Several witnesses, including Nature Trail committee members have described their capturing methods as horrifying and unprofessionally executed.

Last October, a capture crew arrived and chased five domestic birds around the feeding area with a net while visitors watched in horror. With no plan, and little knowledge on safely catching wildlife, these folks severely stressed out one duck and couldn’t manage to catch the others. Still, they separated the one duck from its flock where it ended up in the person’s bathtub. The next morning, the volunteer was asking people on social media, to help find it a home as she wasn’t feeling well. Imagine how the duck felt. The president from the organization mentioned above, was personally praising the efforts of this duck-napper on the social media post, WHILE THE DUCK WAS BEING HELD HOSTAGE IN A BATHTUB AFTER BEING TAKEN FROM ITS FAMILY! Their insistence on interfering with the animals at our beloved Nature Trail is bizarre and ongoing. Their purpose and methods are so against my beliefs and practices in regards to helping our animals, that I felt compelled to write about it. I’ve said this many times before, but the one thing that makes a wildlife rescue person really good, is knowing when an animal does NOT need to be rescued. We’ll talk more about that next issue in a special instructional column I’m preparing for spring.

A team member of their organization presently wrote a letter to a local paper suggesting that feeding the ducks at the NT was not helpful and it was hurting the ducks. Their lack of knowledge of both the Nature Trail, and how the animals act within it should not allow them the ability to come in and disrupt the balance of such a special place, particularly by removing the animals wild or domestic without need or reason. Incidentally, mallards are mostly seasonally monogamous. They pair up with a mate around October and November and remain together until after egg laying (March to May). The males don’t usually help raise the young but they will help protect their space. Removing ducks from anywhere at the end of December, is risking the separation of mated pairs. Not a major hurdle for the ducks, but one that could have easily been avoided with a little KNOWLEDGE and EXPERIENCE.

I happen to know that the east end of Long Island has some of the very best wildlife minds caring for and watching over our wildlife from every angle and location. Our wildlife rescue volunteer army alone is beyond impressive, whether it be rescue, rehab, education, research, training, etc. We all save hundreds of animals a year. I think we can pretty much cover our “Duck Pond”. The fact that these folks are attempting to change the history, the opportunities and the very balance of nature at this special location, is distressing.

I encourage everyone to visit the EH Village Nature Trail and experience the magic while they can. This place has always offered a peaceful and natural atmosphere and a special opportunity to enjoy and learn about our most awesome wildlife up close. And why is this important? Well that’s easy, because WILDLIFE MATTERS.