The annual Blessing of the Fleet in Montauk has always been a wonderful and popular tradition, but this year, the 65th one, was bigger and better than ever! That’s because last year, for the first time, the Blessing was canceled due to the Covid pandemic, so unfortunately none of the families of the deceased could throw in the wreaths to commemorate their loved ones, working on or around the water.

“This 65th year, the only boat that was big enough to accommodate all these families and friends was the Viking Starship,” said Captain Frank Braddick, who has been the director of the Blessing of the Fleet for the past 35 years. “Plus with the perfect sunny weather that day, June 13, we had the biggest Blessing ever, with around 150 boats being blessed as well.”

Each year, Capt. Braddick anchors his charter boat, “Hurry Up,” in the middle of the Montauk Harbor, to organize the rotation of all these boats as they sail past the Town Dock to be blessed by the local clergy of different faiths. This year, the clergy included Reverend Robert Joerger of St. Therese Roman Catholic Church in Montauk, Reverend Bill Hoffman, of the Montauk Community Church, Cantor Debra Stein, of the Jewish Center of the Hamptons, and Reverend Dennis Brunelle of St. Luke’s Episcopal Church of East Hampton.

The annual Blessing of the Montauk Fleet has been put on each year by the Montauk Boatmen and Captain’s Association, since it started in 1955. Captain Vinnie Grimes brought the idea to Montauk after seeing a blessing in Europe while stationed in the service overseas, and the idea took off. Similar blessings have been held in Greenport, Captree, New Bedford, and other ports. 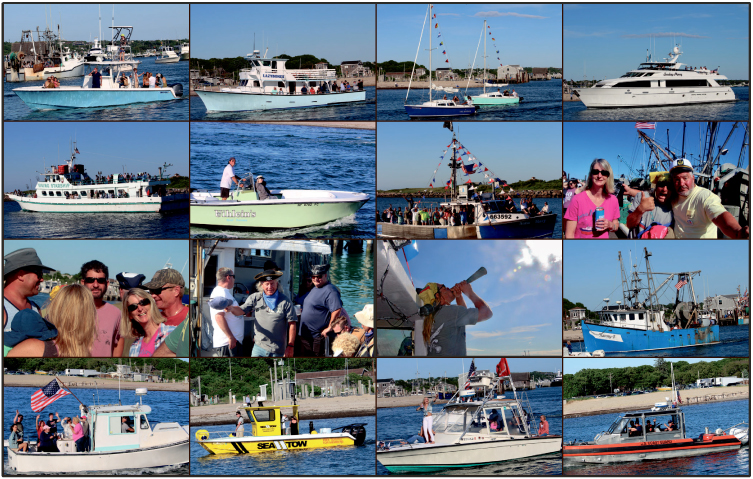 The Blessing usually starts around 5 pm on the second Sunday in June, when all the boats get decorated with colorful flags and line up in the harbor. They range from huge draggers and other commercial boats to Boston Whalers and skiffs, as well as charter boats, sailboats, and private yachts. There are also marine patrol and Coast Guard boats. This year Billy Joel had his downeaster boat, “Alexa Ray,” in the lineup, as did Capt. Joe McBride on the “Marcia,” with New York Senator Anthony Palumbo aboard. This procession stopped briefly at the Town Dock, and after being blessed for luck in this fishing season, they sailed out past the jetties to the Bell Buoy to await the Viking Starship with the families and wreaths.

Capt. Braddick commented that this year, in an effort to help the ocean environment, there was no more styrofoam being used in the making of the wreaths—instead, the flowers were held with grapevines.

As the families tossed the wreaths overboard into the water, David DaSilva played taps, and other music during the total ceremony included Tom Gruhn and Patrick Roniger on the bagpipes and Renee Akkala singing the National Anthem.

One of the most beautiful moments in the Blessing was when all the boats then paraded back to the harbor, with the whitewater fanning out behind them. Afterward, the families and friends celebrated the beginning of Montauk fishing season at local bars and restaurants. The Montauk Blessing of the Fleet is a tradition that will hopefully continue for generations to come.