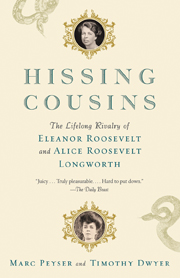 Eleanor Roosevelt and Alice Roosevelt Longworth, who were both born in 1884, were 1st cousins.  Eleanor’s father, Elliott, was the younger brother of Theodore Roosevelt; Alice was Teddy’s oldest child.  Sadly, both Eleanor and Alice endured tragic and unhappy childhoods: Eleanor’s mother, Anna, died when she was 8, and, 2 years later, was followed into the grave by her alcoholic father, Elliott; Alice’s mother (who was also named Alice) died in childbirth on the same day as TR’s mother, which sent the future President into a prolonged depression which took him years to overcome.

Anna, who was a great beauty, objected to Eleanor’s plain looks and peculiar mannerisms, and mockingly called her daughter “Granny.”  After her cold and condescending mother died, Eleanor was raised by her joyless maternal grandmother in a cold and unhappy mansion in Tivoli, NY, where locks were installed on Eleanor’s bedroom door to keep her alcoholic uncles, who still lived at home, away from their young niece.  Eleanor kept her sanity in part by reveling in memories of her father, who treated her lovingly, even though he didn’t spend much time with her.

After her mother died, Alice was raised by her Aunt Anna (who was TR’s younger sister, and whose nickname was “Bye”) until TR married Edith Carew, who, over her new husband’s objections, insisted that Alice live with them.  “I don’t think he had any special affection for me,” Alice said, about her father.

As children, Eleanor and Alice spent time together — ER was TR’s favorite niece; as adults, they both married politicians – Eleanor married her (and Alice’s) 5th cousin, once removed, Franklin Delano Roosevelt, and Alice married Nicholas Longworth, who became the Speaker of the U.S. House of Representatives.

As children and as young adults, Eleanor and Alice were opposites.  Eleanor was shy and insecure; Alice was gregarious and provocative, generating controversy wherever she went, often in the guise of unofficial ambassador for her father, when he was President.  TR famously said, “I can run the country or I could control Alice.  I can’t possibly do both.”

The bad blood between Eleanor and Alice included Alice’s anger at Eleanor for helping to torpedo the NY gubernatorial campaign of her brother, Theodore Roosevelt, Jr., in 1924.  During that campaign, ER drove around NYS in a car outfitted with a teapot on the roof, which actually spouted steam… which was an allusion to the Teapot Dome scandal in the Harding Administration; Ted Roosevelt, Jr., lost to Alfred Smith, which paved the way for FDR to get elected Governor of NY in 1928.

After FDR won the White House in 1932, the Eleanor/Alice relationship became national news, as Peyser and Dwyer explain:

The press played Alice and Eleanor off each other like rivals in a blue-blooded version of Oz: the good witch and the bad witch.  Eleanor was the saint, the woman who revolutionized the role of First Lady…. Alice played the troublemaker.  She relished any opportunity to tweak the stogy establishment, and no one was more establishment – or in Alice’s eyes, more sanctimonious – than Anna Eleanor Roosevelt.

Although she was welcomed as a guest at the Roosevelt White House, Alice never hesitated to criticize her cousin the President, on political and personal matters.  Eleanor [whose actual legal 1st name was “Anna”] and Alice both wrote newspaper columns that were distributed nationally, beginning in 1935.  ER continued writing her column, “My Day,” for years, even after 4-12-1945, when FDR died at the polio clinic he founded in Warm Springs, Georgia, in the presence of his “girlfriend,” Lucy Mercer Rutherford, with whom he had an affair, starting in 1917, which Eleanor discovered in 1918.  Alice’s syndicated column, “What Alice Thinks,” lasted only 18 months.

Eleanor Roosevelt was Franklin Roosevelt’s eyes, ears and legs: in 1921, when he was 39 years old, FDR was paralyzed, from the waist down, by the polio virus; although he never walked, unassisted, again, according to medical records, FDR’s polio-induced paralysis did not affect his sexuality.  Eleanor Roosevelt was also Franklin Roosevelt’s conscience: she constantly advocated for the downtrodden and the oppressed; in a time of rampant racism, ER publicly denounced racism and lynching of colored people (as Black Americans were then called); she helped save many lives by helping refugees from Nazi Germany and Fascist Italy enter the United States.

In contrast, before America entered WW2 on 12-8-1941, Alice became an isolationist, who fiercely opposed FDR’s efforts to rearm America and help the British stave off defeat, by Hitler, in 1941.  Because he was fluent in German – he read Hitler’s hateful memoir, Mein Kampf [My Struggle], in the original German — FDR understood the menace that Hitler posed to every1, before almost any1.

After FDR died, President Truman appointed ER as US delegate to the United Nations, where she helped lead the fight to partition Palestine into Jewish and Arab states, and where she became the dominant figure in drafting the Universal Declaration of Human Rights, which was incorporated in the 1975 Helsinki Accords, which recognized Soviet domination of Eastern Europe in exchange for recognition, by the Communists, of the rights enshrined in the Universal Declaration, and which lead to the peaceful downfall of Communism in Russia and its satellites, beginning in 1989.

Eleanor died in 1962; Alice didn’t attend the funeral.  Alice died in 1980.  Here’s how Peyser and Dwyer sum up the Eleanor/Alice relationship:

They were arguably the most famous women in the country, if not the world, for extended periods of their lives, important enough to command audiences with presidents and kings.  They were writers and lecturers, terrible mothers but beloved grandmothers.  Above all they were politicians.  Even though they never ran for office, few women waded as deeply into the issues of the day.