Hope everyone had a Great Thanksgiving, we sure have a lot to be thankful for this 2021 season! Despite the windy weather conditions lately, when anglers can get out, it’s still going on! All in all this season was action packed for just about all our species. Inshore or Offshore all the bases were covered.

For the most part Fluke fishing was a big improvement from the past few years. The action was steady and finding the bigger fish was the tricky part. They seemed to really move around from spot to spot this season. The deeper water spots produced the better numbers of bigger fish, but then again there was some double digit beauties caught out by the Pocket book area. 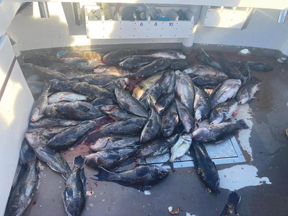 Basically, when the bait they’re feeding on moves on through, the Fluke will not be far behind. Then the tide and wind have to be aligned for that area, or your presentation will not be correct. I’ve said this so many times, it doesn’t matter where in the world you fish, presentation of the bait is all important!

Water temperatures stayed warmer longer this year and the baitfish stayed longer because of it. This held the Striped Bass around longer this season than in quite a few years, which was a very welcomed surprise. Charter boats could fish close to home, sometimes only as far as Shagwong. They were catching limits instead of throwing just about everything back because, all those hoards of juvenile Striped Bass that have been going by the Point for the past 5 years or so finally grew up. Fly fishermen, surf Casters, all benefited from the grown up Bounty! 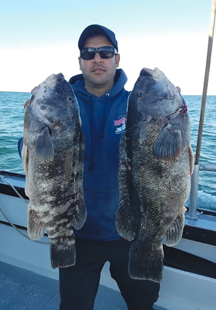 Another bonus we had for 2021 was the giant shoals of Bunker (Menhaden) that spread from Frisby all the way to Shinnicock just about. It was crazy, Humpback Whales chowing on Bunker just outside the sandbar off Main Beach, East hampton. All this baitfish around is a great sign for years to come.
Meanwhile back on the bottom, Black Sea Bass & Blackfish (Tautog) are still there to be had on the various rockpiles further offshore now that the water temperature has dropped. It’s been steady action since both openings. 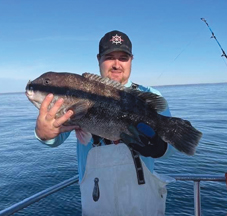 Great to see both Biomasses on such a great incline for a change. Hopefully it will continue to climb, because it’s been great action from both species this season, and still going strong. Find a good rockpile, anchor up, and wait for the dinner bell to go off, catch your limit quick, and you’ll be home for supper! Well, sometimes supper has to wait when the bite is on. LOL.

Keep a good eye on the weather and when you have a safe window, go take advantage of the good fishing and fill that freezer!