The Mermaids of Weeki Wachee and the History of Chinsegut Hill

To be honest, all we thought we’d come for was to see the mermaids that ‘roam’ in the crystal clear springs of Weeki Wachee’s State park, but we also got to discover other close-by historic and fun places that make Florida’s Adventure Coast an interesting place to visit. When we swam with manatees in Crystal River last winter, Montauk’s Chamber of Commerce office manager Karin Johnson had shared her childhood dream with me of longing to see the mermaids at Weeki Wachee. First I thought she was kidding, but quickly realized that her dream of this magical place where these legendary mermaids swim in sparkling, bubbling springs really exists. 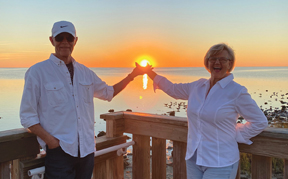 As we researched accommodations for a two night stay we realized that Weeki Wachee and historic Brooksville are only about a 20 minute drive apart; close to the Gulf Coast and part of Florida’s Adventure Coast. We found to our surprise a retreat that was set atop one of Florida’s highest elevations, 267 feet, and part of the Chinsegut Hill Manor House, originally built in the 1850s and listed on the National Register of Historic Places. That’s when we decided to mix mermaids, manatees, and museums into our West Central Florida adventure. Chinsegut Hill is actually a retreat for special events, weddings, educational seminars and gatherings of fraternal and religious groups. However, after a couple of emails back and forth with Christie Williams, the Retreat Manager of the Chinsegut Retreat and Conference Center, we were granted to rent a bedroom with a private bath in 1 of their 4 bedroom cottages. Nestled among magnificent oaks, magnolias, and cabbage palms, we felt that we’d found the old Florida, a peaceful place without a sound of the outside world. From here we got to explore Florida’s Adventure Coast. 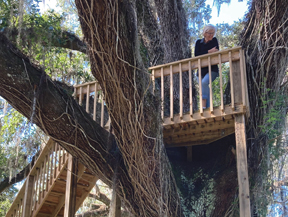 Shortly after we’d unpacked we were on the way to check out historic Brooksville and look for a nice place for dinner. In the 1840s when Florida was opened up to settlers a few brave and hardy families had come to take advantage of 160 acre plots and we were looking forward to taking photos of some of their still existing, beautifully restored, old homes and walking along their brick-paved, live oak tree-lined streets. Brooksville is home to many historic buildings and residences, including the homes of former Florida Governor William Sherman Jennings and football player Jerome Brown.

Fortunately along the way we also found the Breadbox, a little hometown bakery. Rhonda Nienhuis, the owner, brewed us a fresh cup of coffee and accompanied by one of her delicious sweet creations our High Tea habit was saved. Rhonda, she’s married to the local sheriff, told us that all her food is made in house, down to the sandwich bread. www.breadboxbakery.net Rhonda pointed us out to the Florida’s Adventure Coast visitor center where we got to meet John Athanason personally as well as the two ladies that work there ( he was of great help when I was researching the area). I am sure that y’all remember my latest travel piece about Groundhog Day in Punxsutawney!? Turns out that one of the ladies was an extra in my favorite movie. Btw, we stayed for dinner in Brooksville and were glad that we’d discovered ‘Enchiladas’, a cosy, little Mexican restaurant, close to the historic district, with awesome, authentic food and fun people all around us. www.facebook.com/enchiladasbrooksville 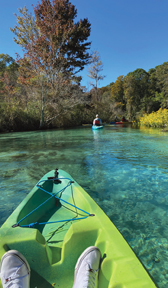 We’d booked the day before tickets for a self-guided kayak tour through Weeki Fresh Water Adventures, so we had the time to stop for a nice breakfast at the famous Florida Cracker Kitchen in Brooksville. We met some real people at this fun place, and to quote my husband, one waitress prettier than the next. A lady next to us had Cracker’s world famous 10,000 island shrimp & grits for breakfast. “Florida Cracker Kitchen is a place to feed your soul and belly at the same time. With a lifestyle driven from the roots of Old Florida, and the Florida Cracker Culture where everyone is treated like family with true southern hospitality!” We couldn’t agree more. www.floridacrackerkitchen.com

The Weeki Wachee River, named by the Seminole Indians means ‘little spring’ or ‘winding river’, and is well protected, therefore they only allow a limited number of kayaks to launch per day. The two young ladies who checked us in assured us that we would definitely enjoy our journey out on these gorgeous turquoise waters and reminded us that the Weeki Wachee is a non-disposable river and alcohol prohibited. Perfect for wildlife viewing, the river grants some of the most dreamy scenery of any Florida waterway, with colorful birds perched in the trees and manatees grazing on billowing seagrass below. Our kayak tour took about 2 hours with little effort in regards to paddling because the river pulled us right along. After several miles through protected wild-lands as we neared the Gulf of Mexico the river widened and paddling became a little more challenging near the takeout point at Rogers Park, which marked the end of our unforgettable adventure. www.weekiwachee.com/kayak-rentals

Everyone we’d asked about a unique place and good food for lunch had mentioned the ’Silver Dolphin’, a restaurant and country store nestled in the heart of Hernando Beach. This charming, local, family-owned place is surrounded by lush, sprawling Florida landscape and a fun decorated, blooming garden. The backdrop is that of a quintessential, small boating community secluded by marshes and barrier islands and we loved the feel even before we stepped through the door. Our food was beyond delicious, creative, local and fresh and the service was the nicest you can get. www.silverdolphinrestaurant.com. 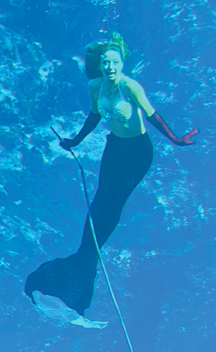 The Wonders of Weeki — open 365 days a year! Weeki Wachee Springs is the only place in the world where you can see live mermaids performing right before your eyes. We were excited like children when the curtains finally rolled up. We were going to experience for ourselves the natural spectacular that amazes visitors since 1947. In 1946, Newton Perry, a former U.S. Navy man who trained Navy Frogmen to swim underwater in World War II, scouted Weeki Wachee as a good site for a new business. At the time, U.S. 19 was a small two-lane road. All the other roads were dirt; there were no gas stations, no groceries and no movie theaters. In the 1950s, Weeki Wachee was one of the nation’s most popular tourist stops. The attraction received worldwide attention. Movies like Mr. Peabody and the Mermaid were filmed in the spring.  All sorts of people stopped to see the mermaids, even Elvis Presley, Don Knotts, Esther Williams and Arthur Godfrey came to Weeki Wachee. Therefore perhaps today the best-known symbol of yesteryear’s Florida tourism is Weeki Wachee. Their iconic mermaids still perform in pure aquamarine water that flows from a first- magnitude spring; healthy and healing Thalassotherapy at its best! No wonder the oldest mermaid, still performing at times, is 76 years old. Each day, more than 117 million gallons of clear, fresh 74-degree water bubbles up out of subterranean caverns. www.weekiwachee.com

And as if our time on Florida’s Adventure Coast wouldn’t have been already precious enough we got to experience that evening a breathtaking sunset at Hernando Beach, on the tip of Pine Island. Pine Island Park is Hernando County’s only public beach. The white sandy beach is shaded by palm trees and provides a number of shelters and pavilions. www.floridasadventurecoast.com

Last but definitely not least, on the morning of our departure we received a fantastic tour of the Chinsegut Hill Manor House from Curator of Education Brian Buttafuoco, and then a tour of the beautiful grounds with Christie Williams, the Retreat Manager. “The significance of the Chinsegut Hill Manor House cannot be overstated in its connections to local, national and even international events through the many people that lived and worked at the property. The building provides a tangible link to many important eras in history including: the initial development of Florida during the pioneer years; the development of a Florida slave plantation and its transformation after the Civil War; the US labor movement including women’s and children’s labor regulations; women’s suffrage; early 1900 literature; the Russian Revolution; the Great Depression and the Civilian Conservation Corp; and the early years of University of South Florida (USF) development. Chinsegut owner Raymond Robins, along with his wife Margaret, had the ears of four presidents and numerous political advisors as well as being the only US or Allied representative to have direct discussions with Nikolai Lenin during the Russian Revolution and the emergence of the Soviet regime. During the first half of the 20th century, decisions and discussions made within the walls of Chinsegut influenced national and world leaders and the impacts are still felt today… “ www.chinseguthillretreat.com