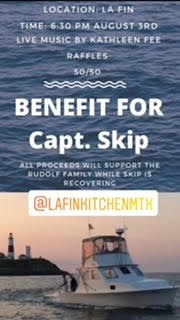 EDITOR’S NOTE:  As many of you know, Captain Skip Rudolph has been having some serious health problems in the last month or so and has been undergoing treatment at Memorial Sloan Kettering.  In dealing with his doctors and treatments, he wasn’t able to make our August print edition. But, even under his circumstances, managed to make our web edition.

Of course, as the Montauk Community is famous for, there will be a fundraiser for him to help support the Rudolph family while Skip is recovering. In Captain Skip’s own words, “It’s quite moving, the entire town has rallied and are very concerned. They are having a fundraiser on AUGUST, 3rd at 6:30pm at LA FIN RESTAURANT where my boat is docked.”

We hope you all can attend and help support Captain Skip!  If you can’t attend, click on the image above to contribute.  Thanks! 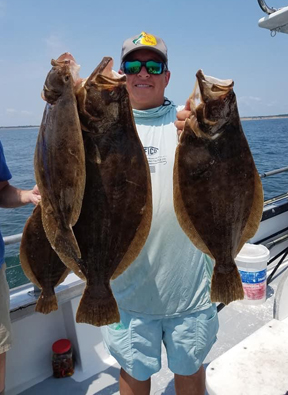 The 2021 season is at full swing and I mean it seems all the bases are loaded! Inshore the Fluke were off to a slow start, and another sketchy season for the flattys seemed to be on the horizon. Well, that isn’t what is happening now. There has been great action with short Fluke all along the south side, north rips, pocket book. Then the larger fish showed up on frisby, cartwright, rocky hill. There were some great days with some really nice sized fish being caught. Keep in mind, they don’t stay in one place like Porgy and Black sea Bass. Fluke are on the move following the baitfish wherever they are headed. So after one hot spot slows down, you have to go on the hunt again until you find their new location.

Weather conditions have been just crazy this season, so trying to figure out where the Fluke will show up next can be quite challenging. Keeping records of historical seasons may not be such a bad idea!!

Striped Bass came to town with a vengeance, the Elbow out to the Porgy lump, North Bar out to the Pollock rip, all held fish. Even the south side by Brown’s and Caswells were producing nice amounts of fish. Once the water temperature reaches that certain point, the Striped Bass move east to get to the deeper cooler water and once again following the baitfish to feed on. Remember fishing over by Block Island for Striped bass you have to be within the 3 mile limit. Both the Rhode island DEM and the USCG have been checking boats daily. 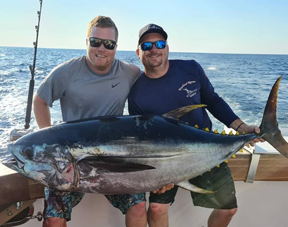 Now for the offshore report! WOW!! Shark fishing is red hot, plenty of bites. Great fighting action for anglers that have never pulled on a large fish. On your way out catch some live Bluefish along with a flat of frozen mackeral and some frozen buckets of chum head out around the CIA or Butterfish Hole area, set up your gear and wait for the action to start!!

Now for everybody’s favorite the elusive Tuna! Last year saw a much greater improvement in Tuna action, but this year has been almost like old times! School Bluefin tuna are all over to the south of Block Island. Spreader Bars and sidewinders seem to be producing the best. Anywhere you see the slicks and birds, you will most likely find the Tuna.

The Canyon reports are equally as good. Big Eye Tuna, Yellowfin, and a resurgence of the Longfin tuna are all being caught, Recent years the longfin Tuna have been scarce, it’s great to see they are back!! Best for canning to make Tuna Salad!!

Hope everyone is having a great summer, take advantage of it, because it’s action packed right now!!