Whenever I heard of America’s most famous country singer, Dolly Parton, what came first to my mind was Pigeon Forge and Gatlinburg in Tennessee, located about a 15 minute drive from her actual hometown, Sevierville. While we were researching hotels and resorts in the surrounding area, we came across a listing for the new Smoky Hollow Outdoor Resort, offering glamping in a covered wagon and/or teepees. Have you ever thought of sleeping in a covered wagon? We had not, but are always open to an experience unlike any other we’ve had before. Covered wagons were first created in the 1700s for hauling materials in Pennsylvania. These sturdy wagons carried later pioneer families and all their worldly goods across the uncharted terrain of America. Rebecca and Rob Turner, the owners of the Smoky Hollow Outdoor Resort in Sevierville lived with their kids for three years in their RV while traveling the country. Hey, but they had a bathroom ‘ensuite’ and we would have to walk up to the resort’s washrooms for showers and, well, you know. My husband felt that wouldn’t be a problem at all, but I decided to pack a bucket, just in case. 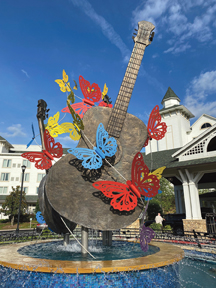 When we arrived in town we stopped first at the Sevierville Chamber & Visitor Center to pick up a map for the Downtown Walking Tour, and a lead of where to get a great lunch. We were given a few options and went for Seasons 101 at the Historic Central Hotel, and weren’t disappointed. From here it was less than a stone’s throw to Sevierville’s Courthouse, where Dolly Parton’s famous bronze statue is located, portraying her as a young woman, perched on a rock while casually strumming her guitar. The statue was unveiled in 1987, shortly after Dollywood opened nearby, and it continues to draw die-hard fans from all over the world. Although this mountain town’s original claim-to-fame is being the birthplace of the country superstar, it has emerged to be so much more! With a diverse choice of fun activities, great restaurants, and must see places, it’s no surprise that this beautiful, sparkling, historic town has become a top vacation spot. www.visitsevierville.com 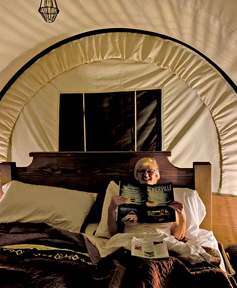 Within minutes, after we’d passed the Soaky Mountain Waterpark, we reached Sevierville’s countryside and the entrance to the Smoky Hollow Outdoor Resort. After we’d checked in at the office, where we met owners Rebecca and Rob (real nice down to earth people), we received a map with the layout of the land, the keys to an electric golf cart and our covered wagon. We took the golf cart back to our parking spot where we unloaded our luggage, the infamous bucket, and rode up through the woods into a valley. Trust me it will take your breath away when you arrive at the bottom of the hollow and see these white covered wagons towering over the green valley with the colorful teepees below. When we unlocked the door to our wagon we were excited like children. The wagons resemble the ones that were used in the days, but included a king size bed with bunk beds, a Keurig coffee pot, a mini fridge, a table and chairs, air conditioning and then some! Next to our wagon was a staircase that led up to the Bunkhouse (private bathrooms, towels, hairdryer, etc. all provided) overlooking a community fire pit, with Adirondack chairs, and the mountain. Of course we had to check out the Sioux-style teepees. They feature king size beds, heating and air conditioning, a Keurig, mini fridge, and microwave as well, but with a twist between Native American and contemporary. 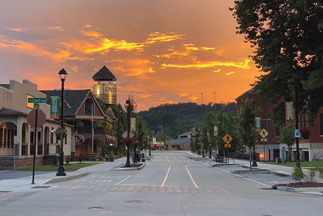 After so much excitement we were ready to hit the town for a real Southern dinner and found the Five Oaks Farm Kitchen right off the main road. The restaurant is located in a barn, and we loved the farmhouse feel inside. Keeping in the tradition of Dr. John and Blanche Ogle, no alcohol was served. The Southern Fried Chicken (that had been soaked in whole buttermilk, hot sauce, seasoned flour and crackers ) came plenty, hot and crispy. My sides: a sweet baked potato and fried green tomatoes. Southern, all the way. After dinner we decided to drive just a couple of miles further down to Pigeon Forge for a delicious ice cream from the Marble Slab Creamery and to see the busy tourist attractions and rides all lit up for the night. We especially liked the Titanic museum where “passengers” experienced what it was like to walk the hallways, parlors, cabins and Grand Staircase of the Titanic while surrounded by more than 400 artifacts directly from the ship and its passengers.

Sleeping in our Covered Wagon was incredible, we listened for a while to the crickets and coyotes in the distance but slept so sound in the luxurious bedding that we barely had to use the bucket. My husband finally admitted that it was indeed a good idea to bring it with us. When we woke up we had hot coffee in bed and talked about the settlers who survived the Oregon trail in the 1800’s. Their way of transportation was the covered wagon, the pickup truck of its day. What gave them the strength to carry on? It was the promise of fertile land and a new-found freedom. For some, it was the call of the wild, the promise of independence and a fresh start. For us it was experiencing something completely different and that included walking up to the Bunkhouse for a hot shower and being grateful that we weren’t part of a long wagon train of families trekking across the plains. www.smokyhollowoutdoorresort.com

We’d planned breakfast at the Applewood Farmhouse Restaurant, the oldest restaurant in Sevierville, but had no idea that it is part of an entire village, a favorite among locals and visitors alike. The restaurant is located in a 100 year old home and serves as the anchor dining establishment for the working apple orchard complex that surrounds it. Every meal (breakfast, lunch and dinner) starts with fresh apple fritters, apple butter and their signature Applewood Julep. Besides these highly addictive apple fritters, we really enjoyed our breakfast both mornings and the caring attention of the staff, especially Matt. Btw, my husband had a tasting of the famous apple wine in the Cider Mill right after breakfast, while I hit the gift shop.

It was a rainy morning, and we decided to drive to Gatlinburg, a busy tourist destination with many man-made attractions. Gatlinburg, located 39 miles from Knoxville, is a popular vacation resort, as it rests on the border of the Great Smoky Mountains National Park and features the only ski resort in Tennessee. We skipped the Gatlinburg Trolley, a public transit system that offers a free ride for tourists and drove up to one of the overlooks instead. Up there it stopped raining and we were able to take photos of the beautiful town with its majestic mountain backdrop. On the way back we stopped for photos at Dolly’s DreamMore Resort and a locked “Dream Box” that resides behind a glass enclosure with a sign that reads: “This chestnut Dream Box is a repository of Dolly’s memories and wishes for the future. It will not be opened until Dolly’s 100th birthday on January 19, 2046…”. 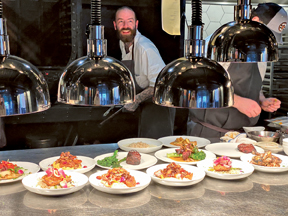 I am a food snob, but once in a while a restaurant comes along that really rings the bell and The Appalachian Restaurant in downtown Sevierville did just that. Don’t get me wrong, I like traditional Southern cuisine, but dining at The Appalachian lifted our Going West adventure instantly from kettle to king. David Rule, the executive chef, put a modern spin on traditional Appalachian ingredients and dishes. The smoky flavors of some of his farm to table creations comes from a large wood burning hearth that is positioned in the heart of the kitchen and our table allowed us to witness the master and his team creating bombs. Orgasms on your palate! BTW, my friend Chef Walter Staib, who’s the host of his national cooking and travel TV show “A Taste of History,” filmed in Sevierville and The Appalachian as one of the places being featured. Airing September, 2022, first on PBS. 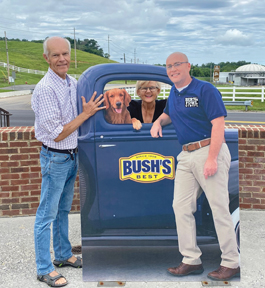 Last, but definitely not least, on the way back home we discovered within a half hour scenic ride through the countryside from Sevierville, the Bush’s Beans visitor center in Chestnut Hill! The 12,000-square-foot center features a turn-of-the-century general store (1897), a museum, gift shop, theater and cafe! A perfect way to finish our covered wagon adventure. Though the museum at the Bush’s Visitor Center is undergoing a makeover, General Manager Scott Schroeder was so kind to grant us a quick walk-through the century old history of this iconic American family business. The museum will reopen in July!