Newsday investigative reporter, Sandra Peddie, has won more than 75 awards, including two New York Emmys and the Selden Ring Award for investigative reporting that gets results, for her work. She was a finalist for the Public Service Pulitzer in 2014 and was a reporter on a Pulitzer Prize-winning project in 1995.

Her new book based on exclusive interviews, and is the first and only authorized biography of legendary mob boss John “Sonny” Franzese. Sonny was the head of the Columbo crime family and financier of the infamous film Deep Throat. 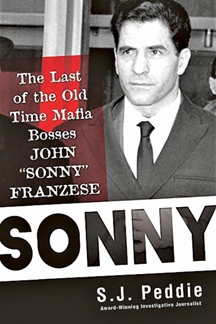 Sandra conducted her interviews after his release from a 30 year prison sentence in 2017 at the age of 100, and just prior to his death in 2020. With the help of his long-time devoted friend “Frankie Blue Eyes,” Sonny agreed to meet with Sandra in his nursing home where he’d lived since his release.
Through a series of meetings, Sonny shared a lifetime of shocking secrets including how he became friends with celebrities like Frank Sinatra and Sammy Davis Jr., his numerous affairs, family life, regrets, FBI Director J. Edgar Hoover’s involvement in Sonny’s dealings, and even with Sonny spending a third of his life in prison – refusing to break the Mafia’s code of silence – he still managed to earn untold millions for the mob.

This work captures some of the personal dealings, and feelings of a man many labeled as a mobster, murderer and more. Reading it reveals much about his ability to influence the dealings and actions of others, and the consequences inherent to his chosen lifestyle including the ramifications of his choices on his marriage and the lives of his children.

In the prologue of the book, Peddie recounts how she had gone to see him with court records, newspaper and magazine articles, and old photos of Sonny to help break the ice for their interview. It worked she recalled, “He dove into the records with gusto, occasionally asking me to read sections, because his eyesight was failing. When I read him the notes FBI agents had written while listening in on private conversations at his home through illegal bugs, his jaw clenched. For a moment, I thought he would erupt, but ever disciplined, he remained calm. His mood lifted when I showed him his rap sheet, with crimes dating back to 1938. It was as if I had shown him his high-school yearbook. He went through each crime, filling in details, laughing at the memories. Sonny was unabashed about being a bad guy. “Every night I sleep good,” he said.” To me, this quote from the book sheds some light on the kind of person Franzese was.

For more information go to: www.goodreads.com/en/book/show/58914879

In each issue of The Montauk Sun, I highlight a book and/or author. However, I also welcome submissions from readers. So, if you have an author/book to recommend I’d love to hear about it. Or, if you’d like to do a short review, I’ll add it to the column. Please e-mail your ideas to mtksue@gmail.com