I am now fascinated by American history like I have never been before. When we were in grade school it seemed like a chore and to be honest many students found it somewhat boring to study about the Pilgrims or when the colonies broke away from England. Now I’ve developed a new interest in this topic as these textbooks tales have come alive via several fantastic television programs. This subject matter has captured my interest on a whole new level. As adults we see the sacrifices, bravery, and intelligence of the men and women during the revolutionary war period in the early days of our country’s development. The more I learn about the men that fought to free the settlers from British tyranny and those that wrote our American Constitution, the more they are admired.  For your viewing pleasure, here are some well done programs to watch especially now since a presidential election is approaching. Seeing where we came from and those that fought to make our country what it is today, it is worth seeing how sacrifices were made for our freedoms and what our forefathers wanted for our nation. 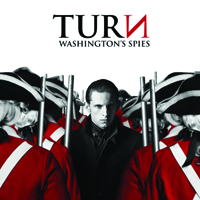 Shown on the AMC channel, Turn: Washington’s Spies “Follows New York farmer, Abe Woodhull, who bands together with a group of childhood friends to form The Culper Ring, an unlikely group of spies who turn the tide in America’s fight for independence.”  Turn is based on the true story of America’s first spy ring. The series started in 2013 and back episodes can also now be seen on Netflix.  It takes place in 1776 in Setauket, New York and continues through Long Island, New York City, upstate and Boston. The hero of the spy ring is an unlikely one, a cabbage farmer. The story begins after the British victories in Long Island, Staten Island and New York City and it is up to General Washington and his army to win the war. Not just a war series, there is love, romance, intrigue and while some “liberties” have been taken in the actual facts, it is a riveting portrayal of that time period. Turn: Washington’s Spies was renewed for a fourth and final 10-episode season, which will premiere in 2017. Try to watch back episodes so you don’t miss the conclusion next spring.  It will also be released on DVD soon. 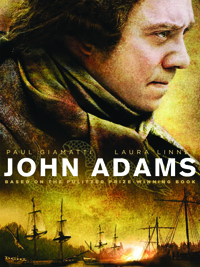 At the time this seven part television series was first broadcast, we did not have HBO at our house yet. From several friends we had heard rave reviews about this series that starred the talented Paul Giamatti as John Adams and Laura Linney as his wife Abigail Adams. This miniseries was broadcast in 2008 and detailed the role Adams played in founding the United States. Critically acclaimed, winning many awards and even four Golden Globes and thirteen Emmys, I watched it the first chance I could after discovering it is still on HBO. Now that we had this station in our Internet package I decided to see what all the fuss was about. Having been completely absorbed in the TURN series and this time period, I continued venturing back into the historic days of our country’s beginning. The John Adam’s mini-series did not disappoint! All the characters from our once dull grade school history books came alive with the actors’ portrayal in the series. Thomas Jefferson, Washington, Ben Franklin, Hamilton, Hancock, King George III and King Louis XVI along with scores of other figures in history, literally jumped off the scene with their larger than life personalities.  Adding realism to the project, many of the scenes were shot in Colonial Williamsburg, Virginia, Richmond with European scenes shot in Hungary. Cobblestone pavements and colonial storefronts were filmed in historic areas of Washington, D.C., Boston and Philadelphia adding to the feel of colonial times. Woven like a real “thriller” the viewer still was captured into the story line even though the positive ending of our country’s early struggled as we all know, had a positive outcome.  This excellent, well done production is certainly worth your time to see it.

Now really drawn into the subject of early American History, I took my journey one step further. A radio talk show had been offering a complimentary online course on The Constitution 101: The Meaning & History of the Constitution offered by Hillsdale College. The college was founded in 1844 and is located in Southern Michigan. Taught by the Hillsdale College Politics faculty, this course begins with a lecture, usually lasting about 45 minutes, then follows up with a twenty minute or so round table discussion with the lecturer and a professor from the college.  The course examines a number of original source documents from the Founding period, including especially the Declaration of Independence and The Federalist Papers. Why would someone want to take this course? Most of us have little or no knowledge of America’s foundational principles, nor do many fully comprehend the Constitution or the Declaration of Independence, which are America’s principles.  This is a no credit course, and it is purely for one’s own growth and understanding and to learn more about what we may not have understood in our youth during our school studies. I am mid way through this education of our founding principles of liberty and can easily recommend it to anyone interested in this topic. Visit Hillsdale at https://online.hillsdale.edu/