The Army Corps of Engineers will be in Montauk on Wednesday to present its future plans for the hamlet’s downtown beach, under its extensive Fire Island to Montauk Point shoreline project called FIMP. The plan calls for the addition of 120,000 cubic yards of sand to the beach every four years, in front of the line of buried sandbags recently installed by the Corps. Beginning at 6 p.m. at the Montauk Playhouse, Army Corps of Engineers representatives will present information. Cards will be handed out if you wish to speak at the end of the meeting, or you may mail it to the Corps. A question-and-answer session will follow at 7pm. 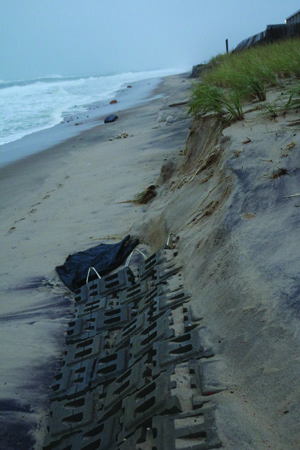 All Residents should be aware of the following:

What is REALLY needed along the downtown stretch of ocean beach in MONTAUK is a 100′ wide beach approximately 4,000′ long, created by dredging sand from a nearby offshore location.
Currently the Draft of the FIMP plan only includes pumping 120,000 yards of sand onto the existing beach every four years. This falls way short of the estimated 1,000,000 yards of sand that is needed to adequately rebuild the beach.

The public comment period to opine on this matter has been extended to end on October 19. A public information session is scheduled for the MONTAUK Playhouse on Wednesday, September 28th at 6 pm. It is imperative that anyone and everyone who is concerned with the protection of Montauk’s beach, downtown and economic survival, speak out, either in person or in writing, to demand the full beach fill project that MONTAUK needs.