“I hope others can see this film and realize that Rocco and Montauk helped me find a formula that I truly believe could help others.”-Ben Intonato 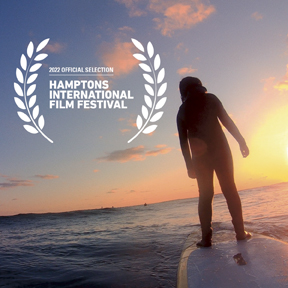 This month’s cover photo by John Madere, is much more than just a spectacular photo; it’s a window into a special story that needs to be told. Anyone who has enjoyed the beach or surfed at Ditch Plains has probably seen or heard about Rocco and his dad Ben. They surf together, father and son, but not side by side: Rocco is in front, and Ben has his back at all times. Like  all children, Rocco is special. He also happens to have special needs: he has autism.

As with any family of a child with special needs, the Intonato family has had to deal with the realization that their son may always need special attention and may not be the child they originally thought he would be. It can be a long and difficult process, yet together, Rocco’s family has evolved as a loving unit and support system.  From cognitive and motor skill training with his parents and sister, to developing his love of being in the water, they “have his back.” 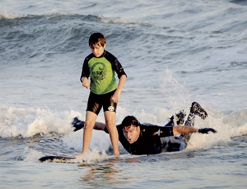 Rocco’s dad Ben is a surfer, sharing his love of surfing with his son. The benefits of surfing together have surpassed all expectations. Being in the water and surfing provides Rocco with a path of communication and emotions. Rocco’s younger sister Aurelia shared, “When he takes a wave and stands up, he looks very excited, happy, and excited at the same time. It’s really, really cool to watch him surf.”

The joy on his face and excitement displayed as he surfs the waters of Ditch Plains is a beautiful gift for his family to see, but also a priceless gift of self-expression for Rocco.  “The ocean is the universal language we share, Rocco and I, and the people on the beach. He and I communicate wordlessly, back and forth, I’m so happy to be on the water. I want my son to just be as happy as possible, I want my son to have as good a life as possible. We can both be surfers-he will be Rocco the autistic surfer.”- Ben Intonato. 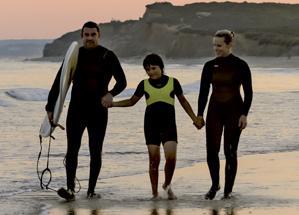 For Ben, dealing with the mixed emotions and struggles that accompany  parents of special needs children, being in the water and surfing have become his way to “let go and feel good in the moment.” Along the way, he has brought Rocco with him.  It may have taken years, instead of weeks, for Rocco to progress in his skills, but he continues to grow each time he’s in the water. “When I am present with him, that’s when I feel unconditional love flowing out of me, and love flowing back from him as well,” commented Ben. 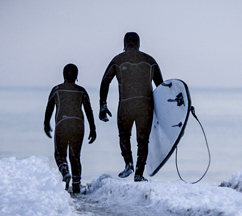 According to the family, many people on the beach and on boards at Ditch Plains have watched as Rocco developed into a surfer, and they have been there to cheer him on along the way.   Rocco’s parents told me that the Montauk community is special and unique in its ability to embrace, celebrate, support and stand with each other through their actions, words, and love.  Rocco’s mom Sara expressed her appreciation, telling me that no community has ever embraced them as the people of Ditch and Montauk have, whether they needed a hug on a bad day, encouragement to keep going, or just acceptance for Rocco as the special gift he is. After living in and traveling to many other communities they knew that they had to make Montauk their home. From a cheer of encouragement on the beach, to the outpouring of love at the fundraiser screening they held in July at Hero Beach Club, they couldn’t be more humbled by the support they feel from the community.

During many of their days in the water, as Ben would push Rocco into the wave and towards the shore, a gentleman on the beach would cheer him on and help with his board until Ben swam in. One afternoon, that gentleman, Kevin McCann, approached Ben and told him that he had a guy he would like him to meet. He believed that what Ben was doing with Rocco should be a documentary and he knew this guy, John Madere, would do a great job. Sara told me, that when Ben came home and told her about it, she didn’t believe it was real. It wasn’t until a week or so later, when she met Kevin on the beach and he explained that he and his filmmaking friend John were volunteering to do the project, that she gave the idea some thought.

It’s obvious that Rocco loves being in the water and on the board.  Not the ‘coolest’ or’ best’ surfer on the beach, Rocco shows courage and wants to be there; onlookers and viewers of the film can see how purely Rocco enjoys the water.  Ben describes his experience of being a father of a special needs child: “At first it’s like being lost in a storm, not sure where to go, what to do…you have to find a way to become present- find your way out of the storm.” For Ben, it’s being in the water, but the idea can be applied to anything-without limits- that you can feel present doing: going for a walk, listening to music, biking, visiting museums…anything that keeps you present, and then begin doing it with that special person- allowing the unconditional love to flow.

So, Ben and Sara agreed to do the documentary with Kevin and John. For about two years Kevin and John volunteered their time and worked on the project with the Intonato family. Eventually, Ben’s dad Don contributed his time, energy and really helped take the film to the next level.  “Rocco Up” is an ongoing experience that the family and friends of Rocco want to share with others through a beautifully filmed documentary. It truly is a lovely film; honest, inspiring, and captivating. If you have the opportunity, I would highly recommend seeing it.

“Today, there is much talk about inclusion. How can we be more supportive of the people in our community who are different? The Montauk community has been incredibly welcoming and
supportive. Each person who cheers “Rocco up!” is an ally. The film is an ode to Montauk almost as much as to Rocco.” -Sara lntonato, Rocco’s mother.

“Rocco Up“ came together, not on a cocktail napkin, but on the beach at Ditch Plains, Montauk. Over many years, Kevin McCann (Executive Producer, surfer) had observed Ben Intonato (Rocco’s father) teaching his autistic son to surf for hours, day in, day out-and felt inspired. Kevin, whose younger brother was blind at birth, is drawn to stories of how family sacrifices and love can help a child triumph over the challenges of a handicap and inspire many people.

Kevin approached filmmaker (and fellow surfer) John Madere about the concept. John was intrigued and agreed to direct.

“Rocco Up” is about the power of love and how love transcends a handicap to lead to joy: the joy of being completely in the moment, finding your ultimate happy place, and feeling you aren’t alone, that someone has your back. Just as Ben Intonato literally has the back of his son’s board, figuratively, the Montauk community has the Intonato family’s back and shares in that joy.

“Witnessing the father-son bond, which brought Rocco and Ben such joy, somehow also brought joy to spectators on the beach and in the water.”  — Kevin McCann, Executive Producer

The film shows that the person you’re helping helps you in return- the meaning of “Rocco Up” goes beyond his ability to stand up on his board. As Ben expressed throughout our conversation, “In the process of choosing unconditional love, you go up- there’s a ‘stoke’ to be had from doing it- and going ‘UP’ together.”

John Madere is an award-winning photographer and documentary filmmaker from NYC. His 2012 short documentary Montauk was an official selection of the New York Surf Film Festival that year. It also won Best Documentary at the NYC Downtown Short Film Festival in 2013. As it was for many, during COVID it became difficult to continue his work, so for almost three years he spent his time in Montauk dedicated to shooting footage for the film about Rocco. John also studied for and received a license for the drone he purchased for the aerial shots; the wonderful cover photo was from his drone. Working mostly by himself, he shot at all hours to get the natural lighting just right. After seeing the film, I’d say that his dedication and skill paid off.  He expertly captured the visual allure of the picturesque Montauk shoreline while enhancing the impact of the film’s message.  John mentioned that a positive outcome of filming over the course of three years was capturing Rocco’s development and progress as a surfer from age nine through twelve. It also produced thousands of hours of film which was then edited by Ruth Mamaril who is a freelance film and video editor specializing in short format projects, including documentary-style pieces and commercials. Ruth was just awarded the “Best Editor” award at the 11th Surfalorus Film Festival for her work on “Rocco Up”.

Ruth Mamaril grew up with her autistic, non-verbal, younger brother. She comments, “People fear the unknown. My highest hope for ‘Rocco Up‘ is that it will inspire and educate viewers about autistic people. The film shows what support can do for an autistic person-support from his family, his community, and his environment. And, of course, the healing power of water is an underlying theme.” Ruth has told Rocco’s story from several perspectives.

“Rocco Up” is very much about fatherhood. Ben and Rocco have been in the water together since Rocco was a year or two old. Ben’s dedication continues to amaze me. When people meet an autistic child with whom they can’t communicate, interaction usually stops. Ben and Sara have made sure that Rocco is integrated into the Montauk community.  – Don Intonato, Executive Producer, Montauk poet & Rocco’s grandfather

Underwater, it’s a place where Rocco has all his abilities. There’s nothing missing. He speaks
through the way he moves, the way he’s trying to do things, his smiling, his laughing. That’s his element. – Meri Intonato, Rocco’s grandmother

When you’re stoked about surfing or any activity, that carries through into the rest of your life. It gives you something to look forward to, something to think about. It gives you a source of joy. Rocco’s progress, from kind of a place of fear, is really no different than any kid who starts out with any kind of fear. But what’s so transformative are all of the additional benefits.  -Dr. Wallace J. Nichols, marine biologist & author of “Blue Mind”

This story became more than I expected when I started writing a ‘cover story’. The dedication of everyone involved is tremendous, and the story is heartfelt and moving. Everyone involved lives in Montauk at least part time and feels a strong connection to its beauty and strong sense of community.

Ben wants it to be known that if anyone would like to reach out to him as a resource, or just to talk about their loved one with special needs, you can contact him through the website. For more information about this beautiful journey and documentary go to  https://www.roccoup.com/  or @roccoupfilm on Instagram or contact Don Intonato, Ditch Plains Productions, donoceans@gmail.com.