A Duck Pond Dilemma – Part One: The Residents

Happy New Year everyone. Hope you all had a wonderful holiday and are now enjoying the winter. This month, I’d like to talk to you about ducks and geese both wild and domesticated. Not just about the species, but an issue that I became aware of in regards to the beautiful East Hampton Village Nature Trail, (a.k.a. the Duck Pond) located on David’s Lane in East Hampton Village. I think it’s important to give you a brief history of my connection with the Nature Trail.

When folks ask me, “How did you get involved with wildlife?” I always start by bringing up my early years at the Nature Trail. My grandmother brought my sister and I there almost every day back in the early 1960’s. It has since remained a very special place to me. So special, that I wrote the only historical reference and detailed look at the Village Nature Trail, in a book titled “Eden of East Hampton”. So, what makes this place so special to begin with? The answer is everything! 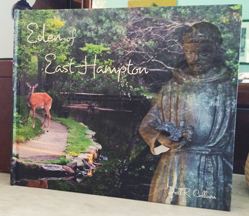 Its grandest feature is its uniqueness. The Nature Trail is an amazing 24 acres of natural habitat for a large variety of wildlife species and plant specimens. It’s the perfect sanctuary, whose borders are the ever-growing incorporated Village and a handful of residential properties. How the patch of natural land continues to exist is a mystery. Even more, is how it still appeals to a large variety of wildlife. Dozens of different animals call the Nature Trail home, and aside from the natural yet seldom issues of predation, all the animals seem to live in harmony with each other, which also allows an up close educational opportunity for people as well. 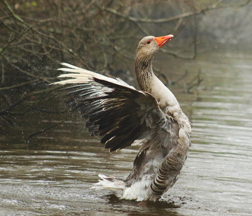 The majority of folks who come to visit the Nature Trail, come for one thing…the waterfowl. Everyone loves to feed the ducks, geese and swans. So many children get introduced to nature at the Nature Trail, which makes it a treasure to our community. Feeding the ducks also gives one the feeling of helping the animals, which only strengthens our human compassion for all animals, and people too.

And when it comes to feeding, we’ve all heard the warnings about feeding ducks bread and how bad it is. Well, actually the bread isn’t all that bad, it’s more problematic because it lacks the nutrients a duck can benefit from health-wise, and it fills up a duck’s belly so it doesn’t go in search of those nutrients when the “bread train” leaves the station. A duck normally eats aquatic vegetation, so leafy greens are a very healthy treat, but even better is duck feed that is available at either Agway in Bridgehampton, OR my favorite, One Stop Pet in Amagansett. Please folks, do NOT feed the birds stale, molding or hardened bread. This will hurt the ducks that consume it. It’s also a good practice to spread the food around when there are lots of ducks present. Throwing food in one area only creates a feeding frenzy which could indirectly, yet very easily cause the birds to injure themselves or each other. This is even more damaging when they frenzy in the water. Spreading the food allows them to spread out as well. 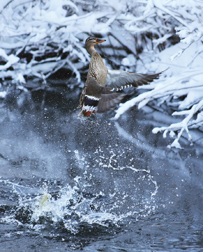 Don’t worry folks about these birds in the cold weather. They all do excellent in the winter, and are considered a cold hardy species. Swans will often fan plums of ground snow with their massive wings and literally shower themselves with the white powder. Don’t worry about their feet either. Waterfowl has an awesome “counter current” system where it uses its warm body blood to cool down the blood before it reaches the feet, which has little soft tissue. The cold feet release very little body heat, and just enough warm blood is pumped through to keep the feet from frostbite. Then, the blood is warmed as it leaves the feet and circulates back to the heart. Sometimes they cut the warming time in half by temporarily eliminating an appendage, which is why they often stand on one leg while the other is tucked away.

Besides food, and shelter from strong winds, waterfowl also needs a water source that doesn’t freeze. They need water to help them swallow foods and to create the oils needed to remain buoyant, waterproof and warm. This is done by coating their feathers with their natural oils during preening (grooming). Finding unfrozen water during the dead of winter can be difficult, leaving many birds to search for food way off shore. The Nature Trail’s running dreen keeps areas of the duck pond from freezing completely, and that is a huge waterfowl draw. Add in the vast amount of brush and wooded shelters, multiple daily feedings, animals living in harmony, and you have the perfect nature location. Both we and the wildlife are very fortunate to have such a unique and magical place on our beautiful east end.

Now to the subject of domestic drop offs. Domestic ducks, or farm raised ducks (excluding Muscovy ducks) are mostly all descendants of the Mallard, which is our most abundant wild duck species on the east end. Folks have been dropping off domestic ducks at the duck pond for many decades, and visitors have always enjoyed them. After all, the wild ducks who frequent the NT duck pond (and duck ponds around the world) are fed daily and become practically domesticated themselves. They do not fear humans like their wild kin in more vast wildlife rich habitat. Domestics like the LI whites, pekin, Chinese runners and cross bred mallards have all spent time at the duck pond. Even domestic geese, like the Ebden and the Pilgrim get dropped off with their farm duck compadres and everyone seems to get along. I’m not a fan of the domestics being abandoned whether it’s temporary or not but, having chased these ducks down the ocean shoreline after being dumped at the beach, I find the nature trail a much more manageable place. Keep in mind however, the Suffolk County SPCA told me that abandoning domestics is a crime. Chasing deer around the sanctuary with tranquilizer guns was acceptable in 2014, but dropping ducks off at a duck pond is not recommended.

Some folks might feel that the domestics are a bit aggressive at times, and perhaps that is a reason they should not be allowed to stay. These are usually the same folks who haven’t had the pleasure of meeting any of the “grumpy” swans who call the duck pond home. Like all swans and geese, their size and vocalisms (hissing or honking) are a major part of their defensive, or protective display. If this intimidates you, that’s because it’s supposed to. But, have no fear, they are mostly “bark and no bite”. Still, while biting is rare, it does occur when forced (defense, protecting young or territory) and one should always be cautious with young children who might stand at eye level with a swan. Their bite is not much more than a nice pinch, but the force of a beak jab could leave a nice bruise. In other words, if you respect the space and mood of the NT residents, you’ll never have an issue. And that should be a wildlife rule worth following everywhere.

Just a side note: Muscovey drakes (males) can sometimes be a bit more aggressive (particularly a flock’s alpha male) and may be more easy to bite or peck at a passer-by. Some might even take chase when threatened. Although very intimidating, the end results is no more than a few harmless shin pecks that usually persuades a person to move on. These ducks are dropped off at the NT very rarely, and usually because they are problematic. They are removed as quickly as we can find them homes, which is often quick.

So that’s the set up my friends. Life at the Nature Trail Duck Pond, happy, healthy and peaceful, as it has been for over a century. But today there is a new threat to our beautiful animal sanctuary. It’s not the ever-growing of an already crowded Village, it’s not poachers or the “White Buffalo Buffoons” coming back to ambush the sanctuary residents a second time. It is however a human threat, and for the safety of our treasured Nature Trail, I’ll be talking about it next issue in Part Two: The Dilemma. Why? Because, our WILDLIFE MATTERS!

Meanwhile, Happy New Year to all!