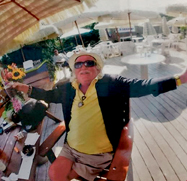 On April 24th we lost another Montauk legend, Cyril Fitzsimons.

Cyril was one of Montauk’s outrageous personalities. Over the years I’d stopped by Cyril’s on my rounds with the paper and see him sporting his colorful sarong, at the first picnic table usually with an entourage. He would make passing comments to the customers that I can’t always repeat, collect kisses from the girls, and greet everyone with a great big grin. Holding court he’d tell tales of his life in Dublin or one of his many adventure prior to his time in Montauk. Once when his brother Clancy was being honored as Grand Marshal by the MONTAUK Friends of Erin and he stepped up to the podium wearing a white suit and a green feathered boa, after a few words he closed with “Yabba Dabba Do!“ One of his catchphrases you’ve probably heard if you knew him.

Hundreds of people have left comments on Facebook reminiscing about each of their encounters with Cyril. You could tell it was like a second loss of fond memories, the first when Cyril’s Fish House closed and now with the news of his passing. He touched many lives through his kindness, generosity, and of course his antics!

Anyone heading down 27 on the Nappeague stretch in the 90’s, till about 4 years ago couldn’t ignore the little shack on the side of the road…CYRILS Fish House! Usually with a few, or a few hundred people standing around the front bar sipping a refreshing cocktail in the sun. It was a beach bar that wasn’t on the beach- this unique concept had a mystical draw, or maybe it was those BBC’s!

In the early days it was a great place to stop on the way in or out of town, or even after a day at the beach. Frozen drinks, a cold beer, or even a bit to eat- it was casual and always lively. Towards the end, as the Montauk crowds began to increase, the already popular spot had people and cars overflowing down the highway.

Originally from Dublin, Ireland Cyril began his Montauk business in 1989. Prior to arriving in Montauk, he came to the states in his 20’s, then after enlisting with the U.S. Marine Corps served in combat in Vietnam. Following that he was back in Ireland, spent some time in Spain and eventually headed back in the States. Summering in the Hamptons and wintering in the Islands, he ultimately opened a Cyril’s in Antigua.

Unfortunately in 2016, after a battle with the town, Cyril closed its doors. This month we say goodbye and remember an old friend.