“IT’S ALL RELATIVE”
By A.J. JACOBS

It’s not an exaggeration to say that the world would be a better place if every1 would read It’s All Relative, by A.J. Jacobs.

That’s because, as A.J. explains in his new book:

If you go back far enough, everyone is a blood cousin. Humans are a startlingly close knit species. By some estimates, we all share 99.9 percent of our DNA with one another. According to some scientists, you are at most seventieth cousins with all other humans. 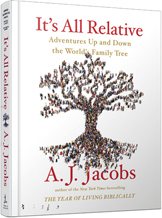 It’s All Relative tells how A.J. got interested in his ancestors, in particular, and genealogy, in general, after he received an email from a cousin in Israel, which said, “You don’t know me, but you are an eighth cousin of my wife…. We have in our database about eighty thousand relatives of yours.”

maybe [A.J.] could too. An even bigger one. A worldwide reunion. Like Woodstock, but with more pants and antiperspirant. Sister Sledge could come and sing “We Are Family.”

A.J. decided to organize a “Global Family Reunion,” which was eventually held at the Hall of Science, in Queens, on 6-6-2015. It’s All Relative, which will make you laugh and make you think, tells how A.J. organized the huge event, and how he learned about genealogy, in general, and his own ancestry, in particular.

Let me explain that A.J.’s goal – besides providing material for a new book – was that the Global Family Reunion would be a “foolproof plan to end war and racism,” because:

maybe the we-are-all family message would resonate with a few people. Maybe it’d increase the total kindness quotient in the world.

In furtherance of his personal quest to promote tolerance, A.J. concludes, “humans have a built-in bias to treat cousins – even distant ones – better than total strangers,” and he sets out to learn about his own cousins, and other relatives, alive and dead.

To learn about his family, A.J. spoke with family members, reviewed family records and photos, searched online databases and off-line archives, and took a DNA test, which concluded that A.J. is 97% Jewish and 3% Scandinavian. A.J. knew, of course, that he was Jewish, but the Scandinavian part was a surprise (which helps prove his point that we are all each other’s cousins).

It turns out that A.J.’s sixth great grandfather was the Vilna Gaon, a famous 17th century Lithuanian rabbi, and that his ancestors included Haym Solomon, the “great Jewish Revolutionary War hero who saved the United States by securing a $20,000 loan for George Washington.” A.J. also got a copy of the FBI file on his maternal grandfather, Theodore Kheel who was a prominent leftist labor lawyer who represented unions and who was an activist in the Civil Rights movement.

In furtherance of his observation that we are all each other’s cousins and that, “to paraphrase the Bible, maybe you should treat your forty-third cousin as you would yourself,” A.J. spoke with Ron McCoy, whose great grandfather was part of the original feud between the Hatfields and the McCoys, which began in the 1860’s, and resulted in the murders of several Hatfields and several McCoys. McCoy told A.J. that, in 2003, representatives of the Hatfields and the McCoys signed a treaty symbolically ending their feud.

To prove his point that “embracing our genetic jambalya will erode tribalism for all of us,” A.J. wrote monthly columns in People Magazine, interviewing some of his famous cousins, including former President George H.W. Bush who, with Barbara Bush, posed with A.J. while holding a sign saying “I AM A COUSIN,” which he also included in It’s All Relative.

A.J. also recounted his speech at the NY chapter of the Daughters of the American Revolution, whose members are female descendants of Revolutionary War soldiers, where he met a DAR officer who is African-American, which surprised — and pleased! — A.J., because he knew about the DAR’s segregationist history:

The DAR was the subject of an infamous race-related controversy in 1939: the great African-American opera singer Marian Anderson tried to book a concert in Washington, D.C.’s Constitution Hall, which was owned by the DAR. But the DAR, which was segregated at the time, had a “white performers only” policy. They rejected her. First Lady Eleanor Roosevelt was appalled [and] withdrew her membership from the DAR and helped organize a concert for Marian Anderson on the steps of the Lincoln Memorial [which] drew seventy-five thousand people.

It’s too bad that Eleanor Roosevelt died in 1962, because she would have enjoyed A.J.’s Global Family Reunion. Although it rained on 6-6-2015, A.J. still got a good crowd at his event, including Harvard professor Louis Henry Gates, the host of a genealogy/family history show on PBS called “Finding Your Roots,” who reiterated A.J.’s theme, telling attendees, ”Despite all our differences – in geographical origin, skin color, hair texture, nose structure – we are all related. We are all cousins, whether we like it or not.”

With the help of volunteers, A.J. organized 44 simultaneous reunions around the world, including in Texas, Mexico, New Zealand, Canada, and Salt Lake City. In Queens, the Global Family Reunion ended with a with the pop group Sister Sledge raucously performing “We Are Family,” with A.J. and his other cousins singing along… and dancing!

Which goes to prove that if every1 reads A.J. Jacobs’s new book, It’s All Relative, then every1 would understand that we are all each other’s cousins, which would make the world a better place.

I sent A.J. Jacobs some questions about It’s All Relative, which are reprinted below, together with his answers.

How can our Montauk Sun readers learn their ancestry by getting their DNA tested (and how reliable are the results)?
There are several good services, including 23andMe.com and AncestryDNA.com. You spit into a tube, send it off, and they send you an analysis of where your ancestors came from, along with a list of distant cousins. I found it fascinating, but people should also be aware of the drawbacks: There are privacy concerns, and they aren’t 100 percent accurate. One service told me that I’m 14 percent Scandinavian. I was excited – I was ready to take up cross-country skiing and eat more herring. But then it turned out to be a mistake. I have barely 3 percent Scandinavian ancestry, if that.

How can our Montauk Sun readers research their family histories?
It’s never been easier to research family history. There are websites such as Geni.com, MyHeritage.com and Ancestry.com. Also, I loved looking at old newspapers on sites like newspapers.com. You can search your ancestors’ names and find the most random tidbits about their lives – like my fourth great uncle who was quoted in an advertisement for a hemorrhoid cream. I was so proud!

What surprised you most about your family history?
I didn’t know that my third great grandfather was a soldier for the Union Army in the Civil War. I found his records on a military website. I’m Jewish, so this led me down a fascinating rabbit hole about Jewish soldiers during the Civil War, a topic I knew practically nothing about.

We think that Eleanor Roosevelt, who famously said, “No one can make you feel inferior without your consent,” would agree with you that if people understood that we are all each other’s cousins, then they would treat each other better. What do you think?
I agree with the brilliant Eleanor Roosevelt. In fact, some scientific research shows that if we all realized how we are all cousins, we might act with more kindness. One Harvard study found that Israelis and Palestinians treated each other with more kindness when they were told how closely they were related.

Have you become friends with any of your newfound cousins?
I’ve made friends with many of my new cousins. For instance, I figured out how I’m distantly related to both the Hatfields and the McCoys. I got to meet one McCoy descendant who created a truce to end the century-old feud. A fascinating cousin!

I have the perfect NY vanity license plate for you: [IHATEH8], which reads as I HATE HATE. Too bad you don’t have a car!
I love that. I do have some cousins who have cars, so I’ll suggest that to them.

What is your forthcoming book, Thanks A Thousand about, and when will it be published?
The book is about how gratitude – especially in these dark times – is so crucial. I go on a quest to thank every single person who had a role (however small) in making my morning cup of coffee possible: The barista, the lid designer, the South American farmer, the trucker who hauled the coffee, the folks who paved the road for the trucker, the people who painted the stripes on the highways so the truck didn’t veer into traffic. In the book, adventures are had. Characters are encountered. Lessons are learned. Observations are recorded. Coffee is drunk. Causes are joined. Synonyms for gratitude are employed. I’m really happy with the way the book came out, and I hope my readers like it too. Thank you!

What are your favorite things to do in Montauk?
I love Montauk. My kids and I have played many competitive rounds at the Puff n’ Putt (warning: Hole 11 is a killer). After working up a sweat on the links, we always go for ice cream at John’s Drive-in.

To purchase It’s All Relative and A.J. Jacobs’ other books, please visit: https://ajjacobs.com/