All who have followed our travels throughout the years know that we aren’t just adventurers who ‘escape from paradise’ once in a while, but we are history junkies, and oh yeah, big time foodies. How can we not be, considering Montauk and The Hamptons food scene was our playground during our formative years. When I started researching America’s oldest restaurants I came across a list of historic taverns and one of them, 200 years old, is located in Abingdon, Virginia. Who doesn’t want to dine in the same halls where His Majesty Louis Philippe, King of France and President Andrew Jackson were already served!?

Located in the Blue Ridge Mountains of Southwest Virginia, lies the charming, small town of Abingdon dating back to 1778. The downtown district with its brick sidewalks and tree-lined streets is famous. Today known for its artsy vibe, historic charm and its proximity to some of the most spectacular outdoor recreation in the state. We’d come to experience all this and to find out why Abingdon has been voted one of the Coolest Small Towns in America and three years in a row Best Small Town Food Scene in the Country by USA Today’s 10-Best!

There was no question that we’d stay at The Martha Washington Inn, originally built in 1832 by General Francis Preston, hero of the War of 1812, for his family of nine children. Over the course of the last 175 years, the building has served as an upscale women’s college, a Civil War hospital and barracks, and as a residence for visiting actors of the famous, historic Barter Theatre located just across the street. 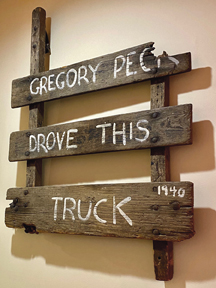 Our accommodations were delightfully spacious, considering that the architectural integrity of the Martha has been preserved for over 150 years. Many famous guests have spent the night at the Martha Washington Inn, including Eleanor Roosevelt, President Harry S. Truman, Lady Bird Johnson, Jimmy Carter, and Elizabeth Taylor. The hotel has also played host to actors from Ernest Borgnine to Gregory Peck while performing at the Barter Theatre. 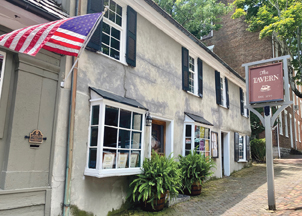 Abingdon is home to over 30 independently owned restaurants, no kidding! A surprisingly high number, considering Abingdon’s population is just over eight thousand. We were fortunate to have made dinner reservations in advance for The Tavern, the oldest of Abingdon’s historic buildings. It was used from the start as a tavern and overnight Inn for stagecoach travelers. Btw, the first Post Office on the western slopes of the Blue Ridge Mountains was located in the east wing of The Tavern and the original mail slot is still in place and can be seen from the street. Trust me, the moment you step into these two century old walls you’re stepping back in time — until the moment when a beautiful hot plate of fresh trout filets or the most creative Wiener Schnitzel and a freshly drawn local beer pulls you slowly back into the deliciousness of the present day. 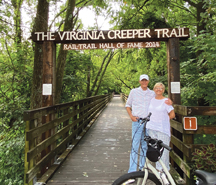 After a sound, no ghost encountered, night and a hearty breakfast at ’Sisters’ restaurant at ‘The Martha’ the next morning we walked down to the Virginia Creeper Trail Bike Shop to pick our bikes for our morning adventure. The Virginia Creeper National Recreation Trail is a 34.3-mile rail-to-recreation trail, traversing through two counties from Abingdon, Virginia, through Damascus, and ending just past Whitetop Station in the Mount Rogers National Recreation Area, at the Virginia-North Carolina border. It was a beautiful, still cool summer morning and riding along the trail brought back childhood memories over the fresh mowed hay still damp drying in the morning sun. There are services available to shuttle cyclists to Whitetop for the 17-mile return descent, however we took the easy ride four miles in and 4 miles back to the base.

A hearty lunch was definitely in order after our morning ride and the historic Peppermill restaurant was located within walking distance of The Martha. Abingdon’s entire downtown is listed on the National Register of Historic Places, a 20-square block historic district. The Abingdon Visitor Center is located in a historic building as well. We stopped there for a walking tour map where we met Director Tonya Triplett and her team who is guiding tourists seven days a week. www.visitabingdonvirginia.com — Lunch at The Peppermill was delightful, fresh, plenty and appetizing.

The famous Barter Theater was closed for shows that week, but Amber Fiorini, the Sales and Services Director was so kind to open the door to us for a quick tour of the longest-running professional equity theater in the United States. In 1933, when the United States was in the middle of the Great Depression, many people could not afford to pay for theater tickets, and many actors had trouble finding employment. Robert Porterfield, founder of the theater, offered admission by letting the local people pay with food goods, hence the name “Barter”. 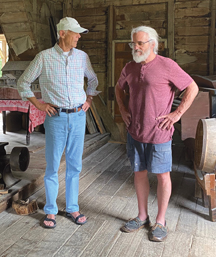 Barter Theatre’s first production was After Tomorrow by John Golden. An Associated Press news story reported that the production was played to a capacity audience that came laden with cakes, fruit, vegetables, poultry and a live pig.

We visited White’s Mill, an historic grist mill located in a lovely country setting not far from downtown. Since the late 18th century, the mill provided meals and flour for the farms and kitchens around, as well as a gathering place for sharing news and views. The mill remains in working condition and was listed on the National Register of Historic Places in 1974. 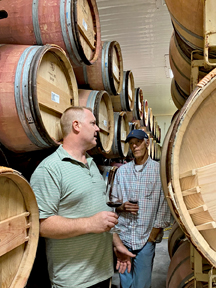 There’s a cool side to Abingdon as well, with fun summer music festivals at the Cultural Center, Wolf Hills Brewing, and Abingdon Vineyard on the shores of the beautiful South Holston River where a few world class wines are served. In 2018, the Gardner Family stumbled upon the beautiful gem and moved from California to Virginia to grow the legacy of Abingdon Vineyards. We had the pleasure of meeting owner, Loren Gardner, who grew up in Napa Valley, studied viticulture and wine making at UC Davis, and built wineries and vineyards. A passionate vintner, indeed.

Talk about cool, we had a fab dinner at Foresta on our second evening. My charcuterie board was one of the most creative so far and worth the price of a main course. My husband’s filet mignon, butter on the plate….foresta, eclectic, and ethereal…was the bomb!

There were a couple of lunch restaurants that you might want to put on your list as well. The White Birch is a cute little lunch place serving locally sourced, raw juices and smoothies and they offer a variety of healthy and delicious lunch options. For all the smoked meats lovers, the Bone Fire Smokehouse serves some award-winning smoked meats with some interesting high country southern side dishes, complemented by live music at night. All the restaurants that we mentioned are located on Main Street.

It’s no coincidence that Abingdon keeps appearing on lists of the artsiest small towns in America. We had visited the Southwest Virginia Cultural Center and Market Place earlier and were so impressed by its soaring space retailing the art and craft of over 180 artisans who have been juried by fellow artisans. From traditional pottery and quilting to modern paintings and glasswork, we explored the over 5,000 pieces for sale.

Our final place of art to visit was the William King Museum named after William King, an early settler who came to America in 1784 at the age of fifteen. By the 1790s, he had established himself as a successful salt merchant and during his life, King served on the board of the Abingdon Male Academy. In his will, he left a gift to build a home for the Academy. The land chosen for the school was a hill overlooking Abingdon, adjacent 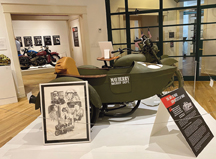 to Sinking Springs Cemetery where William King was buried. That same hill is currently home to the William King Museum of Art. We like to thank curator Anna Buchanan, Marketing Director Alyssa Justice for taking the time explaining a couple of the exhibitions that we were interested in in depth. “The Open Road: The Art of the Motorcycle” is a retrospective of the art, design, and history of the motorcycle. A visual timeline will feature the history and design of the motorcycle from the controversy of the original make and model, to present day designs from various brands. On exhibit until September 18, 2022.

Also on exhibit until October 31, 2022: “The Long Rifle in Virginia!” The long rifle was a surprise factor in winning America’s independence. A distinctive product of the backcountry of Pennsylvania and the Southern colonies, this celebrated rifle was essential for survival on the frontier and that reminds me to mention the Abingdon Muster Grounds. The Muster Grounds are the northern trailhead for the Overmountain Victory Trail, a 330-mile National Historic Trail. The trail traces the route used by patriot militia during the pivotal Kings Mountain campaign of 1780, which helped decide the outcome of the Revolutionary War.