Nope, no miss-spelling! I am not talking about Mary Ingalls of “Little House on the Prairie.” I am referring to Mary Draper Ingles, an American pioneer and early settler of western Virginia. In the summer of 1755, she and her two young sons were among several captives taken by Shawnee after the Draper’s Meadow Massacre during the French and Indian War. So, why Mary Ingles? As retirees we spend part of our summers in the mountains of West Virginia and are often escaping from our mountain paradise in Glade Springs for day trips. One of our favorite places was the historic towns of Lewisburg, Fayetteville and Hinton. It takes us about an hour by car to get to Lewisburg and we have to cross the Mary Draper Ingles bridge that crosses the New River.

I, a newcomer to southern West Virginia, wasn’t at all familiar with the lady whose name was gracing a bridge, but when we explored “The Tamarack” my husband insisted on buying me a paperback book with a cover that reminded me of the books we read as teenagers. You know, the kind where ‘they’ always get each other, in the end! BTW, for 25 years, Tamarack Marketplace has been an iconic road stop for all who travel I-77 through Beckley. Besides good food over 2,800 local artists and artisans of fifty-five counties are featured here. I didn’t touch the book for a while but we kept on crossing Mary Draper Ingles’s bridge over the New River. Eventually during a bad weather spell I picked up the darn book and from then on I had to force myself to put it down. That’s by the way the very same experience my long-term editor John Lomitola had; as well as my brother-in-law Michael Chalut and his wife.

“In the 1750’s, southwestern Virginia was still a sparsely settled frontier, but this land drew a young woman who continues to have untold influence – even in the 21st Century. Born in Philadelphia in 1732 to Irish immigrants, Mary Draper, along with her family, became part of the western migration as settlers moved down The Great Wagon Road into Virginia. Eventually she married William Ingles and settled in Drapers Meadows in what is present-day Blacksburg. While many parts of the frontier were in the grips of the French and Indian War, the New River Valley residents didn’t have reason to fear the parties of American Native Indians, who passed by periodically from the Ohio Valley on their way to fight the Catawba’s further south. At least, not until a day in July 1755 when members of the settlement were killed, and Mary and other family members were captured by the Shawnees and taken hundreds of miles into the frontier wilderness. However, this remarkable woman summoned tremendous physical and mental strength as she escaped from her captors and walked through Kentucky, West Virginia, and Virginia, navigating only through memory and by following significant waterways (the Ohio, Kanawha, and New Rivers), back to her home valley.” Mary represents hundreds of women who survived capture and returned to their log cabin homes during the early settlement of the region west of the Alleghenies. www.marydraperingles.com 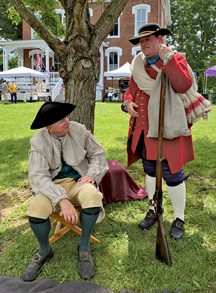 I’d seen on Facebook an advertisement for a Mary Draper Ingles weekend celebration in Radford, Virginia and had added the event to my calendar. You know that our phones are spying on us, don’t you?! However, this is the place where Mary and her husband moved to, established a homestead and a ferry operation and where Mary lived until her death in 1815. Radford, surrounded by a loop of the New River, is a charming, small city with a clean and peaceful small town feel and home to the Radford University. Radford was originally a small village of people that gathered near the New River, which was a major draw to travelers for fresh water and food while traveling west. The town had a major population increase in 1854 when the Virginia and Tennessee Railroad came through. Glencoe Museum, also on the U.S. National Register of Historic Places, was built in 1870 in the 19th century Victorian style and serves as a home for many artifacts concerning the beginnings of the town. 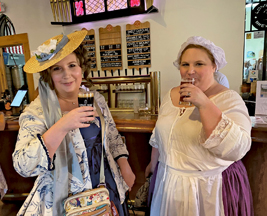 That’s where we met “Follow the River” author James Alexander Thom and his wife and three descendants of Mary Draper Ingles. Three generations of strong women, all living in the same town as their ancestors, and one of the ladies proudly carrying her name. Another interesting lady that we met at Glencoe was Dina Smith-Glaviana, Ph.D., her period clothing demonstrations were especially interesting as she is also Director of the Oris Glisson at the Historic and Textile Collection at Virginia Tech. It was fun to see her and a friend, both still in period, later sipping on a pint of “The Mary” beer (what else?) at the first and only craft brewery in town. Housed inside a formerly vacant church, the vaulted ceilings and original stained glass definitely ‘high-light’ the space. Even if you don’t like beer, and who doesn’t, Long Way Brewing is worth a visit. www.visitradford.com

You are probably wondering by now where we stayed. Well, with Radford located only under an hour and a half from our summer domicile, we’d decided to make this a day trip and be back home for dinner and find a nice lunch place in town instead. The Radford Coffee Co. served an awesomely good in house-roasted coffee and an excellent lunch. Established in 2015, Radford Coffee Company was created to impact lives locally and internationally and donates money and time to school projects in Nicaragua (Project Ezra) as well as giving locally. RCC is a faith based organization that believes in giving back. 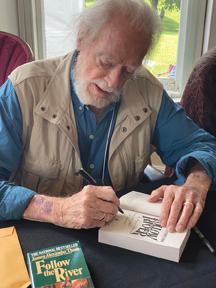 Each year thousands of visitors attend a play, celebration or festival for Mary Draper Ingles somewhere in one or more of the four states of Virginia, West Virginia, Kentucky and Ohio, through which she journeyed. Because of numerous books and movies, but in my opinion, especially the book “Follow the River” by James Alexander Thom, a “New York Times” bestseller, her recognition goes well beyond this region. James Alexander Thom (born 1933) graduated from Butler University and served in the United States Marine Corps. He is a former professor of journalism at Indiana University, and a contributor to “The Saturday Evening Post.” His fifth wife, Dark Rain Thom was a member of the Shawnee United Remnant Band until its dissolution. Thom married Dark Rain in 1990. Dark Rain is co-author with Thom of the books “Warrior Woman” and “The Shawnee: Kohkumthena’s Grandchildren.” His website describes her as the Water Panther Clan Mother of the East of the River Shawnee of Ohio. www.jamesalexanderthom.com 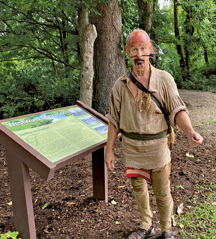 We also met the author of “Angels Along the River” author E.M. Lahr who retraced the escape route of Mary Draper Ingles; an inspirational story, indeed. “The inspiration is contagious and it affects us all in different ways.” wrote James Alexander Thom. When we visited the tall bronze statue of Mary, the heroine, in the Mary Draper Ingles Cultural Heritage Park right below the Glencoe museum we met another interesting fellow, Ghingwe, and his wife Otaes. These two living history interpreters of Appalachian Living History have participated in or led nearly 1,000 history or nature events and activities since 1989. I really wanted to ask Ghingwe why the feather that he’d obviously pulled through his nose doesn’t make him sneeze. www.appalachianlivinghistory.com 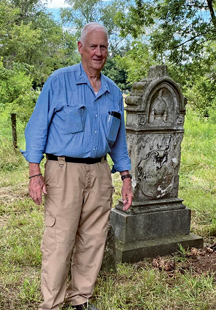 Saving the best for last. I will never forget meeting Colonel Lewis Ingles Jeffries, U.S. Army (Ret.) at the historic Ingles Farm, where he stood tall and proud by the family cemetery and talked about the grave stones next to him and Mary’s old homestead and colonial farm life the way it used to be. The Ingles Farm, located on the banks of the New River, is on the U.S. National Register of Historic Places and still in family hands. Melting the past, present and future where some of the earliest European settlers once made their home and their descendants now run an innovative beef cattle operation. Colonel Lewis Ingles “Bud” is the seventh generation of the family founded by William and Mary Draper Ingles, one of the more famous couples of the Western Virginia frontier, to live on the farm. I wish I knew him long enough to call him Bud like his friends.