Cedar Key — A portal into another world! 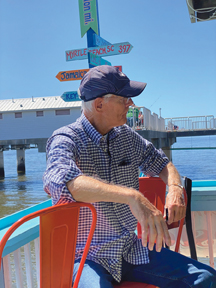 The Cedar Key Chamber of Commerce advertises its tiny island as “a place where time stands still. A quiet island community nestled among many tiny keys on the Gulf Coast where the small town feeling is absolute”. That, and that fact that the year round population counts for only about 800 full time residents, convinced us to visit. Cedar Key is one of several barrier islands off the Gulf Coast, located about 50 miles southwest of Gainesville, and sits three miles out into the Gulf of Mexico. Highway 24 is the only road coming into town and crosses over the salt marshes and channels on four small, low bridges. The nearest major airports are Tampa and Orlando, a regional airport in Gainesville, and there’s an airstrip on the island where small planes may land. 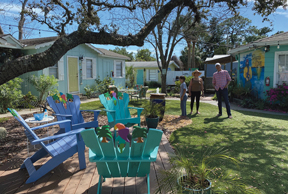 As we were researching accommodations for our 2-night getaway we realized that many of the places were booked, even during the week. By sheer luck Pirates Cove Cottages had a last minute cancellation that would turn out to be for us the most charming and perfect place with beautiful views from our private, raised patio overlooking the ever changing marshes. We could have fished and kayaked, tide-depending, right from the backyard while sunrise and bird watching was a given. Check-in was at an unheard 1pm that allowed us to practically add an entire afternoon of island bliss. 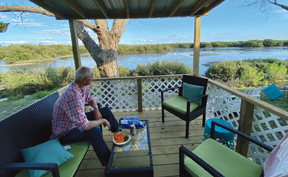 The small town feeling here is absolute; transportation is by car, but the road is shared with bicycles and golf-carts and people are friendly and kind. www.piratescovecottages.com

Cedar Key is known as a place for excellent fishing, bird watching, nature trails, kayaking and coastal guided tours. Federally protected sanctuaries, the Cedar Keys form a chain of barrier islands ideally suited to a vast range of migratory and shore birds, including the elusive white pelican, roseate spoonbill and bald eagle. The variety of natural habitats, from salt marshes to Indian shell mounds offers interesting choices for avid hikers. Six miles outside Cedar Key on the Gulf Coast stands Shell Mound of Cedar Key, part of the Lower Suwannee National Wildlife Refuge. Shell Mound is the largest prehistoric shell midden on the central Gulf Coast, covering five acres and rising 28 feet above sea level. We hadn’t just come for Cedar Key’s natural beauty and to celebrate our 6th wedding anniversary but also to rediscover some of the almost forgotten history of old Florida. And the archaeological dig at Shell Mound was all we hoped for and then some. The highlight of our visit was the walk on the self-guided, less than a half-mile Shell Mound archaeological trail, a large shell-bearing archaeological site that was once the location of special gatherings for Native American groups across the broader region. The site rose to importance as a ritual center at about A.D. 400; a 2,000-year-old skeleton was found here in an ancient burial in 1999. www.cedarkey.org 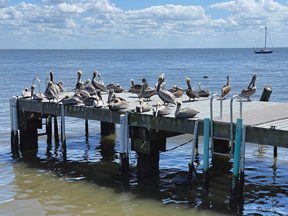 Cedar Key has battered the elements for certain. In 1950, Hurricane Easy, a category-3 storm with 125-mile-per-hour winds, looped around Cedar Key three times before finally making landfall, dumping 38 inches of rain and destroying two-thirds of the homes. Luckily, the storm came ashore at low tide, so the surge was only 5 feet. Hurricane Elena followed a similar path in 1985, but did not make landfall. Packing 115-mile-per-hour winds, the storm churned for two days in the Gulf, 50 miles to the west, battering the waterfront. All the businesses and restaurants on Dock Street were either damaged or destroyed, and a section of the seawall collapsed. 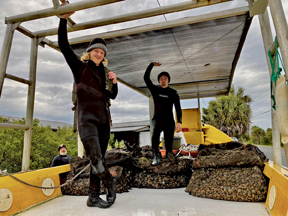 After a statewide ban on large-scale net fishing went into effect July 1, 1995, a government retraining program helped many local fishermen begin farming clams in the muddy waters. Today, Cedar Key’s clam-based aquaculture is a multimillion-dollar industry, and we are happy to report that we got to meet a few of the island’s hardworking clam farmers. We met Justin Anderson and his sons Cody and Joseph coming back from their morning harvest and still in their wetsuits. For them clam farming in Cedar Key is a family affair and they sell locally. Cedar Key, because of its location between two rivers, has become the nation’s leading producer of farm raised clams. Sustainable farming without pesticides or artificial feeds!

The village holds two festivals a year, the Spring Sidewalk Art Festival and the Fall Seafood Festival, that each attract thousands of visitors to the area. The rustic fishing enclave is now a tourist center with several famous seafood restaurants. As we arrived early we stopped for lunch at ‘Duncan’s On The Gulf’, and had a Bohemian style Conch chowder, served under a blue sky with purple orchids on our large bowls for decoration. Dinner we had at ‘Steamers Clam Bar & Grill’ where we shared the Steamers salad with grilled seafood and a beer-battered fish with a baked potato — the restaurant was busy with spring vacationers. For our anniversary dinner we’d made reservations at the historic ‘Island Hotel and Restaurant’, which is for sale to anyone interested, as the owners are looking to retire. My Red Fish en Papillote & Marcus Angelhair Pasta with Scallops were excellent and so was the service. One morning we went for breakfast at 2nd Street Cafe, where the lovely Ms Betty, glorious 78 years young, served us a real hometown breakfast. And not to forget the historic ‘1842 Daily Grind & Mercantile’ where we met Sarah Solano over a coffee and a scone. She’s the beautiful sister of another clam farmer (Tim Solano) that we’d met somewhere along the way. Tim(othy), Daniel and Joseph Solano are running the Cedar Key Aquaculture Farm and are selling some of the area’s harvest collectively to Sam’s Club, no kidding.