Much has been said, written and sang about West Virginia and having traveled extensively during the past few years in this wild and wonderful mountain state, we can assure you that culture seekers will discover that centuries-old Appalachian traditions are very much alive here in these charming small towns. One of these beautiful small country towns with a fascinating history is Berkeley Springs in Morgan County, our nation’s first spa town, nestled in the northeastern panhandle of West Virginia and easy to reach from the Washington/Baltimore metro area. George Washington vacationed in this town to soak in the warm springs during the 1760s.

Interestingly the Montauk Chamber of Commerce’ office manager Karin Johnson, grew up in Berkeley Springs. Her mom and dad and her 5 siblings lived in a three story home that was built into the mountain across the road from the historic Berkeley Springs castle until the road became too busy and they moved out to a farmhouse with acres of land.

Recently named by Reader’s Digest as 1 of 13 most romantic small towns in America, the town boasts warm mineral springs, exquisite dining venues, cafes and coffee houses, breweries, cool shops, galleries, art studios, antiques, a multitude of spas and dozens of lodging choices including elegant B&Bs, historic inns, cabins and resorts. We decided to stay at The Country Inn in the heart of Berkeley Springs which has been welcoming guests from all over the world year-round continuously since 1933. The Inn is situated in its perfect downtown park location, working its magic and persuading us to fall in love with its bucolic charm.

Our accommodations on the second floor of the historic inn, was for lack of better words, delightful. The cozy elegant, light filled Betty Lou Suite featured a romantic four poster bed, a super cool refurbished bathroom with a sink-in tub, a subway-tiled shower, and all the other modern gadgets that made our stay uber-comfortable. Our suite was named after Betty Lou Harmison, the niece of the original owner. Her family owned the Inn when it was still known as the Park View Inn. Karin Johnson had met Betty Lou personally on several occasions, as she was the mother of her sister’s best friend and would invite the kids to one-night sleepovers for a treat. Betty Lou Harmison still lives next door to The Country Inn. www.thecountryinnwv.com

We had a terrific dinner at the rustic Morgan Tavern at The Inn on our first evening in Berkeley Springs where we met the innovative Executive Chef, Scott Collinash. The Chef’s very own Charbroiled Caesar Salad creation was my first, but definitely not my last. I am not going to give Scott’s recipe away but rest assured I had a foodie-bliss-attack, and once again the next day over his lunch special, a from-scratch turkey salad! Btw, the table water that is served here was outstanding as well, no wonder, Berkeley Springs received the International Water Award 2020 for highest quality water. If you see bottled “Berkeley Springs Water” anywhere —get it, it’s packed with natural minerals. “One may drink freely of these amazing waters and fill one’s jugs up at the public tap as guaranteed by Virginia law, establishing the town in 1776.” 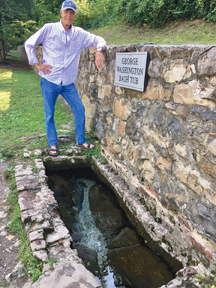 A fountainhead of warm mineral waters frequented by Native Americans long before Europeans arrived in the New World, are located practically right next to The Country Inn’s gardens. First noted as Medicine Springs in 1747 on a map drawn by Thomas Jefferson’s father, the waters for many centuries have drawn visitors seeking health and relief from the stressors of everyday’s life. George Washington first visited in 1748 and made the area his favorite getaway through the 1760s. In 1776, Washington’s family and friends drew up a plan of 134 lots, named the streets, and incorporated The Town of Bath, invoking the muses of the renowned English spa. Berkeley Springs is a sister city to Bath, Somerset, England. www.berkeleysprings.com/history-berkeley-springs/ 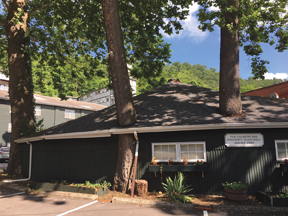 We met Matt Omps, the General Manager of The Country Inn at Berkeley Springs, the next morning at the front desk and we expressed how happy we were with our accommodations, the staff and the dinner the night before. My husband, forever the joker, asked Matt if he could stay in the room with the trees?! He was referring to the Parkview Garden Room, an adjourning wedding and conference venue, and home to 3 resident trees that the room has been built around!!! The Omps family purchased the Inn 7 years ago. We then visited The Country Inn’s own Renaissance Spa located in a tall tower behind the historic Inn. Here is where SPA-ing in Berkeley Springs becomes luxurious, overlooking the old historic springs but offering the entire repertoire of a chic European Style spa.

I had decided that we would experience The Old Roman Bathhouse located in the historic Berkeley Springs State Park that houses the mineral spa that has been in use since colonial times. After all, long before the first Europeans discovered the warm waters of Berkeley Springs, it was already a famous health mecca which attracted Native Americans from as far as the St. Lawrence Seaway in Canada and from the Great Lakes to the Carolinas. I had booked 1 of the 9 private walk-in Roman Baths for us and Swedish massages afterwards. When we arrived we had to fill out three forms and our body temperatures were taken through the window by a pretty young lady before we were allowed to enter the building with our masks on. The lockers and facilities reminded me a little of squeaky clean hospital facilities; spa robes and towels were supplied. A pleasant attendant guided us to a private walk-in Roman Bath that contained 750-gallons of mineral water heated to 102 degrees sourced right from the spring, which flows at a constant temperature of 74.3 degrees. She explained how to add cooler water if necessary and left us to bliss. We so enjoyed soaking and floating in these healing waters, as well as our massages afterwards.

After a hearty lunch at the Inn we walked all over town and discovered that arts and culture are a main feature in the daily life of Berkeley Springs, from publicly displayed arts in gardens and on sideways and walls, to galleries and studios. Berkeley Springs, as an art town began to flourish in 1977 when the Morgan Arts Council (MAC) was established, now located in the Ice House, a former 40,000 square foot apple cold storage building that now has been turned into a community art center. All this has earned Berkeley Springs state, regional and national recognition. It is West Virginia’s first certified arts community, is listed among the 100 best small art towns, and places among the top 10 art destinations among small cities and towns in America. www.macicehouse.org

By sheer luck we walked into the open door of the Rocks-N-Glass gallery where we got to meet Khosrow Javid, a man from Persia who made Berkeley Springs his home a long time ago. He expresses himself through his works of art in his hand-painted wine glasses, vases and other unique glassware, and he also paints rocks. His middle eastern inspired patterns seem to be calculated and congruent with color and space, riddles on glass. We are grateful to Mr. Javid for allowing us to enter his world and for the advice of where to hop off the beaten path. www.rocks-n-glass.com.

We had one more dinner to fill in Berkeley Springs and chose the Naked Olive Lounge, a charming “speakeasy” style bar /restaurant combo with an olive oil and balsamic vinegar tasting gallery, and an interesting menu but decided to go light and ordered a couple of dinner size salads. Anyone can throw together a seared AHI tuna salad. Mine was culinary art. www.nakedolivelounge.com 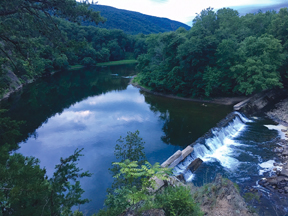 Mr Javid had advised us to watch the sunset on Prospect Peak, Berkeley Springs’ panoramic overlook and then to go off the beaten path. Just a short 3 mile drive from Berkeley Springs we found a smashing overlook from where we could see three states: West Virginia, Virginia and Maryland. National Geographic Magazine rates this scene among America’s Outstanding Beauty Spots. From here we continued our journey and followed Mr Javid’s hand drawn map all the way to another scenic overlook and found it just the way he described it, challenging to get to, but worthwhile. From there we drove down to the river below where local kids were swimming. Here, all the way in the middle of nowhere and us feeling a little lost, we met Kate Shunney, the editor of The Morgan Messenger, who pointed us back on the beaten path. Virginia is for Lovers, and West Virginia for adventurers!