Anyone who has seen the Montauk or NYC St. Patrick’s Day Parade has seen and heard the Amityville Pipe Band. They have been accompanying the Montauk Friends of Erin in both parades for 58 years.

Recently, they received a tremendous honor:

“On behalf of Historic Programs and the D-Day Committee, the Amityville American Legion Pipe Band has been chosen as Lead Pipe Band and Official Representative of The United States during D-Day Commemoration Ceremonies in Normandy France in June of 2023. This invitation is based on the Pipe band’s outstanding professionalism and standing in the community.”

The Band will perform official music for all events, including Wreath Laying and Commemoration Ceremonies at Brittany and Omaha Beach American Cemeteries, and parade services in Sainte-Mère-Église (the first town liberated by American paratroopers on D-Day). 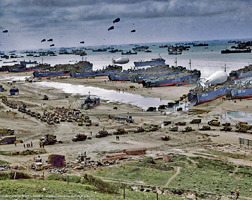 The Battle of Normandy, which lasted from June 1944 to August 1944, resulted in the Allied liberation of Western Europe from Nazi Germany’s control. The battle began on June 6, 1944, when some 156,000 American, British and Canadian forces landed on five beaches along a 50-mile stretch of the heavily fortified coast of France’s Normandy region. The invasion was one of the largest amphibious military assaults in history. On the 79th Anniversary of D-Day, the Amityville American Legion Pipe Band will be honoring the brave servicemen who fought in that battle; many of whom paid the ultimate sacrifice for freedom.

The Band is honored to be nominated to perform in this prestigious event. Their objective now is to raise $50,000 by May 1, 2023 to replace threadbare uniforms and subsidize travel costs. In order to achieve this goal, they will be doing numerous fund-raising events.

Please consider showing your support by making a charitable contribution to send the Amityville American Legion Pipe Band for this prestigious event. Every tax-deductible donation received, no matter the amount, is greatly appreciated and will bring the Band closer to achieving its fundraising goal.  Thank you.