Kay Tobler Liss had always thought about writing a novel, but it was not until she and her husband Peter Liss moved to Montauk in 1989 that she became inspired to tackle it. Peter Liss became supervisor of Montauk County Park, where they lived, at historic Third House, until 2002. This park is steeped in history, as a place where Teddy Roosevelt and his Rough Riders recovered from scarlet fever in 1898, and where there are also Native American lands and artifacts. Kay Liss was inspired by the Indian history in the park, with its small ancestral village and Indian museum, which has since moved to Second House Museum in downtown Montauk.

“I was always interested in the history of the Montauketts, and at the time I was there, this land was being potentially threatened by privatization,” she said. “A lot of parks were privatizing, so more money could be brought into the parks system.”

A self-proclaimed environmentalist, Kay Tobler Liss was involved as a volunteer in the Concerned Citizens of Montauk (CCOM), The Group for the South Fork, South Fork Natural History Museum (SOFO), and the North Fork Environmental Council, where she was president. She also helped found the Third House Nature Center. 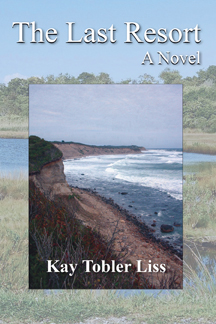 Her new (and first) novel, “The Last Resort,” which comes out July 31, is published by Plain View Press of Austin, Texas. It deals with the importance of this connection to the natural world, and with the theme of social justice for oppressed people, as the Native Indians including the Montauketts. In her book, a Manhattan corporate attorney, with his career and marriage in turmoil, escapes from his hectic and stressful life, to Montauk in the off-season. As he struggles to reclaim his life, he meets three people who change his life—a surfer, a fisherman and a Native American woman fighting to preserve ancestral land threatened with development—a fight that eventually endangers her life. The tension between past and present comes alive as he finds new meaning in life by connecting to the natural world.

Liss, who now lives in Maine, with her husband, has been a writer and editor for decades, working at newspapers and magazines including HOUSE Magazine and Hamptons Magazine, Sunstorm Arts, and the Shelter Island Reporter, where she was managing editor. She studied Literature at Bard College and Environmental Sciences at the former Southampton College. Liss taught in both fields in New York State and Maine.

“The Last Resort” is available through Amazon, retail bookstores, or can be ordered in quantities from Plain View Press. Liss said it is challenging to have a book come out at this time during the pandemic. “But it’s also a good time, because the themes of my book are our connection with nature, healing, and social justice for all Americans–themes which have become so urgent right now.”

She will be coming back to Montauk in August, when she will be having a private book talk, and another book talk on August 1 at South Fork Natural History Museum and Nature Center (SOFO) at 5 pm. Attendance is limited and by reservation only. For reservations and more info call (SOFO) at 631-537-9735.