Night Owls of the East End

I recently acquired my federal and state licenses to possess an educational wildlife species. As many folks know, I spend the school year visiting our local schools and speaking with students about the importance of our wildlife and the compassion they deserve while trying to survive in their shrinking habitat. During the summer months I do the same for outdoor groups, and at camp functions and other events, spreading my message to both young and old. I use realistic stuffed toy animals to allow the younger folks a hands on, up close learning experience; however, I now have a co-educator that will be joining me and I thought this would be a great opportunity to talk about her and her species. 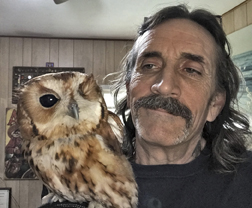 Her name is Athena and she was rescued a couple years ago as a young Eastern Screech Owl, after injuries sustained from accidentally flying into a vehicle. This is a common occurrence with Screech Owls who occasionally feed on flying insects that are illuminated by vehicle headlights at night when the owl is most active. The results are not often good for the Screech Owl which is a very small species of owl, and certainly no match against a moving vehicle. Fortunately for Athena, she survived the impact and was found by a passer-by who was gracious enough to get the owl immediate help. Although the injury caused her the loss of one eye and partial blindness in the other, she was still able to be rehabilitated, but not returned to the wild. Her options were to be euthanized or to become an educator. The wonderful folks at the Evelyn Alexander Wildlife Center cared for her and prepared her for a life of teaching. She was adopted by me last month and we’ve been working together on a new presentation for the upcoming school year. 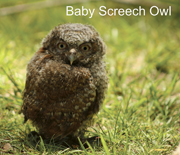 Let me tell you a little bit about the Eastern Screech Owl. Very common in eastern North American wooded environments from Mexico to Canada. Adults range in size from 6 to 10 inches and weight up to 9 ounces. The females tend to be a bit larger than the males. They are either a rust color (red or rufous morphs) or grey with darker patterns (grey morphs). There is also a rare brown morph found only in Florida, that may be the results of hybridization between the color morphs. This small owl has a large head, short tail, prominent ear tufts, beautiful yellow eyes, and a pale yellowish beak. Their legs are feathered to their feet which is equipped with powerful talons used to catch and kill their prey. Like many avian species, the Screech Owl can either appear round and stocky or straight and thin, depending on the desired feather positions. The ears tufts can also lay back and appear hidden which can sometimes lead to them being mistakenly misidentified as the even smaller, and tuft-less Northern Saw-Whet Owl; however, the Saw-Whet is a browner color and has a more defined circular pattern on the head. This pattern is shared by other owls at various levels of definition, and it’s called a facial disc.

Eastern Screech Owls are nocturnal, and due to their effective camouflage, are rarely seen during the day perched on a limb or peeking out of a hollow tree cavity where they would generally nest. Their haunting, yet memorizing song can be heard at night. It’s not a screech like their name implies, but rather a descending, whinny-like hooting. They also make a short purring call that is called a trill. These owls are fierce hunters active from dusk until dawn. Extremely sharp eyesight and hearing is used to locate prey. Most often from a perch, a screech owl will drop down on its prey and grab it with its sharp talons. Small prey is eaten whole while larger prey is torn into pieces with the owl’s strong beak. Large insects (crickets, moths, beetles, etc.), snails, spiders, worms, small birds and even small mammals are regular prey. Mice make up about 67% of the screech owls diet; however, rats, young squirrels and rabbits are also taken. Small fish, snakes, toads and frogs also make the list of a tasty meal for a screech owl.

Screech owls have lived up to 20 years in captivity, but in the wild it’s significantly less. This is mostly due to predation. Both raccoons, opossums and even grey squirrels are common predators to screech owl nests here on the east end. Snakes, crows and even Bluejays feast on screech owl eggs when left vulnerable. Diurnal birds of prey attack and eat adult screech owls, particularly the Cooper’s Hawk, Red-Tailed Hawk and Northern Harrier. The screech owls greatest threat however, is their cousin, the Great Horned Owl because they are both actively feeding during the same time of night. Other large owls like the Barred, the Barn and even the Snowy owl are a threat to the small screech owl. An actual documented case told of a Barred owl specimen whose necropsy found a smaller Long-Eared owl in its stomach, which contained a screech owl in it’s stomach. Still, the leading cause of death to all birds of prey on the eastern end of Long Island remains rodenticides. A poisoned mouse can easily and quickly render sick, disable or kill a predator that eats it, most particularly in birds of prey. For that reason, mouse poison and other forms of rodenticide are greatly NOT recommended for treatment of rodent issues. 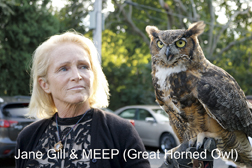 The Great Horned Owl is another common owl on the east end. A much larger species of owl compared to the Eastern Screech owl, yet they both share common features and behaviors. Both share the ear tufts (called plumicorns) while their actual ears are hidden on the sides of the head; however, the Great Horned owl’s tufts are much larger which gives the species its name. Their eyes are just a little smaller than human eyes, and have a wide field of view. Rather than turning its eyes, the owl must turn its entire head. The head can turn in all directions and rotate its neck 270 degrees. Their eyes and ears are sophisticated nocturnal hunting tools. The Great Horned owl can hear a mouse move a twig 75′ feet away. With a wing structure that almost eliminates sound in flight, and very powerful legs, feet and talons capable of applying 300+ pounds per inch of gripping / crushing power. In some large female species, the gripping power can be compared to that of a Bald Eagle. If you’ve ever visited one of the many local events celebrating our awesome wildlife, you may have had the pleasure of meeting “MEEP” the Great Horned Owl. Meep is a great ambassador for all our wonderful wildlife here on the east end.

Other owls that are found right here at home are the Barn owl, Barred owl, Long & Short Eared owls, Northern Saw-Whet owl and the diurnal arctic Snowy Owl, a favorite winter time visitor. All owls are great in controlling rodent issues, so it’s obvious that owls benefit humans in that way. For that reason alone, I wish to repeat my earlier comment about using rodenticides. A poisoned mouse eaten by an owl or other bird of prey could lead to secondary illness or death. It is best for our environment to eliminate poisons, pesticides, rodenticides, herbicides that directly or indirectly impact our wildlife. What is dangerous to our wildlife is potentially dangerous to our domestic pets, our children and ultimately ourselves and our necessary resources. Please seek out more natural and less invasive alternatives to distance yourself from nuisance critters,… or simply learn to co-exist. 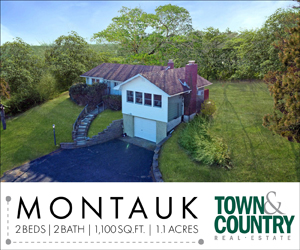