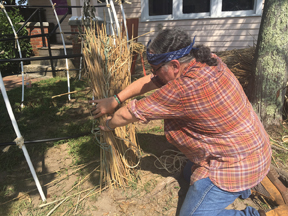 A Wigwam Workshop conducted by David Martine is taking place on the front lawn of the ECHS Heritage House, now continuing every Saturday through October 14, 11am-2pm. David will be using a combination of traditional and non-traditional materials, discussing the use of wigwams and their importance to Native American history. Sessions are only $10 for adults, $5 for children.
On Saturday, September 30, from 2:00-4:00pm, Mr. 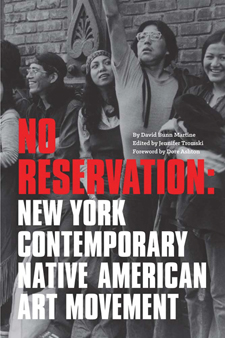 Martine will be speaking and signing copies of his newly-released book NO RESERVATION: NEW YORK CONTEMPORARY NATIVE AMERICAN ART MOVEMENT. David Bunn Martine (Chiricahua Apache/Shinnecock/Montauk) is an artist and curator whose work is prominently featured in the current Native Americans on Eastern Long Island show at the Heritage house. Martine received a Joan Mitchell Foundation Painting Fellowship in 2008 and a Curatorial Research Fellowship in 2012 from the Andy Warhol Foundation for the Visual Artists for the publication of this volume, and famous art critic, professor and author Dore Ashton, recently deceased, is a contributor.

This exhibition and attendant events are made possible with funds from the Decentralization Program, a regrant program of the New York State Council on the Arts with the support of Governor Andrew M. Cuomo and the New York State Legislature, administered by the Huntington Arts Council, and the Robert David Lion Gardiner Foundation. It was curated by Dr. Georgette Grier-Key, and the ECHS acknowledges the help of David Bunn Martine and the Shinnecock Nation Museum, Sachem Eugene Cuffee, advisor, Paula Wagner, Harriet Simmons, Jackie Jeffries, Nicole Fortune, and Bill Chaleff.

The Mission of the Eastville Community Historical Society is to preserve historic buildings and research, collect and disseminate information about the history of the Eastville area of Sag Harbor, Long Island, New York, County of Suffolk, State of New York, as one of the earliest known working class communities composed of African Americans, Native Americans and European immigrants. More particularly, it seeks to obtain recognition and landmark status for qualified buildings in the Eastville community and St. David AME Zion Cemetery in Sag Harbor, New York; to discover and collect any material which may help establish or illustrate the history of its settlement, development and activities in peace and war and its progress in the areas of population, education, arts, science, agriculture, manufactures, trade and transportation; to collect printed materials, manuscripts, manuscript materials and material objects illustrative of life, conditions, events and activities of the past or present; to disseminate historical information and arouse interest in the past by publishing historical material in the newspapers or the media, conducting tours, holding meetings with lectures, papers and discussions and by marking historical buildings, sites and places of local historical significance; and to educate local school children by exposing them, through artifacts, tours and lectures, to this rich addition to local history, thus enhancing their experience of Sag Harbor Village life.