Great weather, great fishing defines yet another excellent month in Montauk for 2016. Fluke fishing has been spectacular the past 3 months. August right through September we saw lots of big keeper Fluke coming into the docks. When “Hermine” passed by, we thought it would run all the Fluke out of here, boy were we wrong! The party boats, charter boats, and private boats have been seeing great action since Hermine. I think it even made it better! Inner Cartwright, Outer Cartwright, Southside, Elbow all producing very nice sized fish! Fortunately, Fluke season closed September21st, but there can’t be any complaints this season!! So who’s picking up the slack after the Fluke? The Black Sea Bass are on the move just in time!! 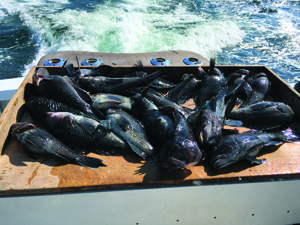 All the spots where the Fluke have been hanging out are now filling up with the tasty Black Sea Bass. Clams and Squid strips on a “high- low rig works the best. Striped Bass are still around in good numbers and good size!

September’s moon saw good tides and some really nice Striped Bass come over the rail. Live eels, trolling parachutes works the best, but you have to wait for the right time of the tide for best results.

Offshore fishing did take a hit when Hermine came by. Prior to her coming the Tuna bite out in the canyons was stellar, but after it passed the Tunas took a hike! Hopefully they’ll re-group before the water gets too cold. 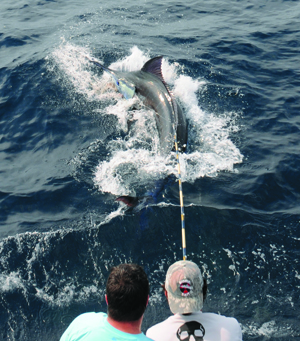 Shark fishing is still active with big Blue Sharks showing up like they do every September. Some nice Hammerhead Sharks have been hanging around the Butterfish Hole area, and what a fight they give you.

On a more serious note, night Striped Bass fishing last year saw a boat running up for another drift in the dark collide with another boat. Fortunately the two anglers jumped off the boat before being hit and sustained no injuries thank God. The vessel that hit them fled the scene never caring what happened to the occupants. This September 16th and 17th full moon, history almost repeated itself. You must use extreme caution when moving up for another drift. Some other guy’s running lights might not be working and you’ll never see them until it’s too late. Just take an extra minute to run back up SLOWER!! Yours and other lives are at stake!!
Tight Lines,
Captain Skip