I don’t think there are too many who haven’t watched the movie “Groundhog Day” with Bill Murray, the ever beautiful Andie MacDowell, and Chris Elliott. “Groundhog Day” was considered a box-office success on its release, earning over $105 million to become one of the highest-grossing films of 1993 and is in my opinion one of the greatest American comedy movies ever. Punxsutawney, Pennsylvania was on my bucket list; my husband who’d never seen the movie couldn’t have cared less and would never want to join the crowds on Groundhog Day in Punxsutawney in the freezing cold anyway.

However, as luck would have it, several weeks ago we were on a fun adventure weekend getaway at the Seven Springs Mountain Resort in Pennsylvania, located in close proximity to Frank Lloyd Wright’s Fallingwater. While there, we discovered that the Flight 93 memorial in Shanksville, a truly must visit shrine, is just an hour north-west from Seven Springs and that from there it would be just another 2 hour drive north to Punxsutawney. Here was my chance – “I got you, babe!” 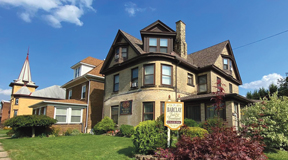 Now that the plan was confirmed it was time to checkout out the hotel situation in and around Punxsutawney and I found that Barclay Bed & Breakfast probably would resemble closest the B&B where Phil awakens every morning in the film. I was fully aware that most of the movie was actually filmed in Woodstock, Illinois. There’s even a plaque on the sidewalk in Woodstock, right outside of Cass Street, where Phil keeps stepping into a puddle. “Bill Murray stepped here,” the plaque reads. Since the movie came out over 20 years ago, Woodstock has fully embraced Groundhog Day as well, celebrating the yearly tradition with walking tours from the movie’s filming locations and predictions from their very own groundhog, Woodstock Willie.

But back to the Weather Capitol of the World and Punxsutawney Phil and Barclay Bed & Breakfast. It turned out that the B&B used to be a beautiful private Victorian home that was built at the turn of the century and has welcomed guests since 2011. I’d read that they are famous for their home cooked breakfasts, served on real china in their formal dining room and its location in the historic district, next to the library where Punxsutawney Phil and his wife Phyllis live in a climate controlled burrow. (There are viewing windows from the outside, but both were napping when we visited.) It states on Barclay Bed & Breakfast’s website that they are no longer accepting reservations or are even maintaining a waiting list for upcoming Groundhog Days as they simply don’t have enough rooms to accommodate the many requests. Lucky us, we were here now and could choose a comfortable room with a private bath, and enjoy a homemade hot breakfast with a nice couple from Oregon that stayed here for a week while they were researching the area for a new hometown to relocate to. www.barclaybedandbreakfast.com

One of the most popular landmarks in Punxsutawney and in Western Pennsylvania is Gobbler’s Knob. It is the site of the annual Groundhog Day celebration and where Punxsutawney Phil makes his prediction every February 2nd. I think we can all agree that Punxsutawney’s event is the most famous of many Groundhog Day festivals held in the United States and Canada. The event formally began in 1887, although its roots go back even farther and is based upon a communal light-hearted suspension of disbelief. It is organized by the ‘Inner Circle’ recognizable from their top hats and tuxedos who ostensibly communicate with Phil, the groundhog, to receive his prognostication. www.visitpunxsutawney.org 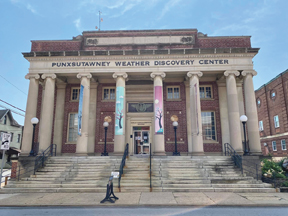 We stopped at the Punxsutawney Chamber of Commerce and picked up a map in search of the 32 larger than life groundhog statues, fondly known as the Phantastic Phil’s. These whimsical 6 foot tall fiberglass groundhogs are scattered throughout the area, each an individual work of art. My poor husband who’d checked out already the local golf course had to take a walk through town with me where I tried to take photos of as many of the fun and colorful statues as possible. He had no choice since the course was private anyway. www.punxsutawney.com Punxsutawney, home of the world-famous furry weather 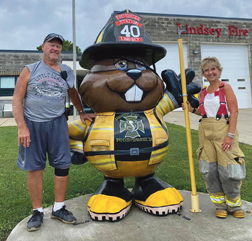 forecaster, is also known as “The Weather Capital of the World.” That makes the downtown Weather Discovery Center a worthwhile destination for all ages to learn how the science and folklore of weather prediction collide! www.weatherdiscovery.org

Anyone else who loves diner food on a country road? Dinner we had, like our trip to Punxsutawney, impromptu at Punxy Phil’s Restaurant, a family diner that we choose for it’s name. We ordered Hamburger steaks with grilled onions & mushrooms and baked potatoes with sour cream —- Punxy Phil’s quite reasonably priced food turned out to be good comfort home cooking and the service amazingly quick and awesome! BTW, there are really cute murals inside the restaurant that add to the whole groundhog theme of the town. www.punxyphilsrestaurant.com 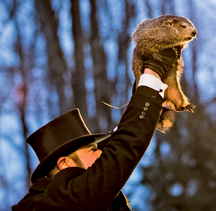 When we finally visited Gobbler’s Knob where thousands of visitors celebrate on Groundhog Day I could clearly hear the song in my head that plays over and over again when Bill Murray enters the fairground where he’s reporting once again the weather prediction for the ending of the winter. There’s also a trail with informational and educational signage as well as metal art displays. Punxsutawney was originally a campsite halfway between the Allegheny and Susquehanna rivers. It is located on the earliest known trail to the East, the Shamokin path. The area was, at times, occupied by Shawnee or Delaware Indians and, sometimes, by Senecas or Iroquois. According to the original “Creation” Story of the Delaware Indians, the “Lenni Lenape” (or original people), who were their forebears, began life as animals in “mother earth” and emerged centuries later to hunt and live as men. Thus it was that Oijik (Wejak), or Wojak, which was carried over to us as “‘Woodchuck”, came to be recognized as the “grandfather” of the earliest known inhabitants of this area. Although the area previously served as a “border” between Indian nations, the displaced Delawares settled in large numbers about 1723 because of the pressures from white men in the East and Iroquois intrigue. The main move toward the west followed between l740 and l760 as the result of further pressure. It was during this period that an lndian sorcerer first appeared in various forms and attacked travelers from the East. He was hunted and killed in combat by a young chief. His body was burned to destroy the “evil medicine” but miraculously turned to searing sandflies, or “ponksad,” which plagued the area and the Indians. From that time the Indians called the location,” Ponksaduteney,” which meant the “town of the sandflies.” The sandflies are now gone, but the “ghost of the spelling” is with us to stay. www.punxsyhistory.org