If you’re looking for a casual, fun restaurant and bar with a nice atmosphere and water views, Sammy’s is the place for you. This large, spacious restaurant has been located in the heart of the Montauk docks for decades, and has also been a popular place for nightlife. In the past, it was Christman’s Bar and Restaurant for a long time, and also Clemente’s Crab House.

Sam Joyce, a chef and native of Montauk, took over this popular restaurant in 2012, serving, as he says, “creative comfort food.” Since then, he has added high top tables for eating in the bar area, and guests are also welcome to eat at the long and comfortable bar. There is cozy table seating in the back room, and also outside along the water in the warmer months. Guests can look over the Montauk Harbor and watch the boats come in with their day’s catch.

Since Sammy’s is in the heart of the harbor, he serves much fresh fish and shellfish on his lengthy menu. My friend Kim and I joined a group of her friends at a high top table in the bar area, on a recent Saturday night, and followed Sam’s recommendations for some interesting appetizers. Loved the spicy Bang Bang Shrimp, a generous portion and super tasty. The Calamari Salad was huge and the calamari was soft, not greasy, and cooked just right. Not even a fan of Brussel Sprouts, I was surprised how great the combination of Brussel Sprouts, Pork Bellies and walnuts appetizer was, and am even wanting the recipe!

Our fun and very efficient waitress, Ginger, brought over our entrees of a tender 14-16 ounce Grilled NY Steak for Kim, served with mashed potatoes and green beans, and a fresh tilefish dinner for me, served with a cous-cous and grain combination that was delicious. Being right at the docks, Sammy’s had other fresh fish on the menu, of fluke and blackfish. You can tell just by tasting his fish that Chef Sam is an expert at seafood. But he makes the effort to create special dishes that are out of the ordinary. 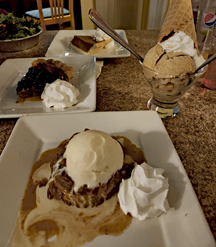 That also goes for his desserts. The Apple Butter Cake was melt in your mouth good, and the Chocolate Walnut Pie was rich and sinful. I love to try something I’ve never tried before, and I found the Pumpkin Ice Cream with swirls of cinnamon and whipped cream to be divine! They are also known for their Chocolate Lava Cake.

His menu is large and varied, with more apps of Fried Oysters, Lobster Mac and Cheese, and Crispy Lobster Salad Tacos. Also lots of soups—from Lobster Bisque to Sammy’s Fish Chowder, and creative salads, lobster rolls, and sandwiches like the Shrimp or Oyster Po Boy. 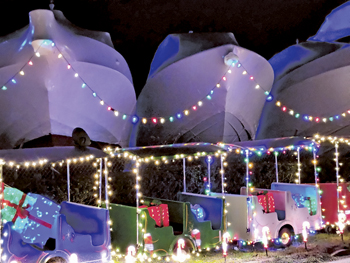 Sammy’s is one of the few Montauk restaurants open year-round, except for January and February. He also caters events and parties at his place, and has a wonderful food truck. Sammy’s will be open on December 10 for the very first Boat Parade in the Montauk Harbor, with Christmas Carols, Santa and hot chocolate. For details, call Joanne at Inlet Restaurant, or Sammy’s at 631-238-5707, located at 448 West Lake Drive in Montauk. You will see Sammy’s and all of West Lake Drive lit up with thousands of beautiful lights and Christmas decorations, like a magical Disneyworld, thanks to Jim Raynoha and the crew at Uihlein’s Marina next door. Henry Uihlein has been decorating the harbor for Christmas since 1957. Take your family there to see it!!