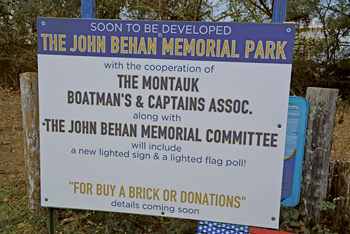 Assemblyman Thiele, opened by saying: “November 11, 1944 was John’s birthday. We are here today, to kick off the John Behan Memorial Park. John, was my friend, my employer, and my hero. He was what America is all about. One great American. This Park will guarantee so that future generations will know what John did and the sacrifices he made to make this country great.”

When introduced by Assemblyman Thiele as John’s better half and wife of 53 years, Marylin, was teary eyed and could hardly speak when realizing how many people showed up for John. “I couldn’t be prouder of my town. It’s going be a great project. It was something John and I talked about, wondering where he would like to be buried.” “John always loved the Harbor” so I asked: “What about, I put you down the Harbor?” “That is how this came about.”

Marilyn thanked everyone for coming to the ground breaking ceremony,  including Capt. Joe McBride of the Montauk Boatman’s and Captains Association group, the John Behan Committee and everyone else who helped secure the small piece of land from Suffolk County to honor her husband, other veterans and active-duty members of the armed forces. The Behan’s three children, Jason, Jack, and Bridget all from Montauk and most of the grandchildren were present and stood next to their mom/grandma during the ceremony. “Soon there will be a memorial Brick Buying donation to place on the ground, several benches, a lighted sign and a flag pole surrounded by flowers. Hopefully, the Park will be opened by Memorial Day weekend 2023.”

John, who died in Montauk on February 2021 in his sleep at the age of 76 was a former Marine who lost both of his legs during the Vietnam War by an anti-tank mine while defending his patrol from machine gun fire near Da Nang, Vietnam on May 23, 1966.  However, that did not stop him from becoming a U.S. Wheelchair Olympics gold medalist, a town assessor, a nine-term New York State assemblyman, the head of the NY State’s veterans’ affairs office, the chairman of the East Hampton Town Republican Committee and recipient of many medals and awards.  It is only fitting that Montauk found John a beautiful resting place so that future generations can visit and pay respect to him and other veterans who made the ultimate sacrifice so that we can have the freedom we have today. Thank you John, for your service and the services of all the active and retired armed forces.