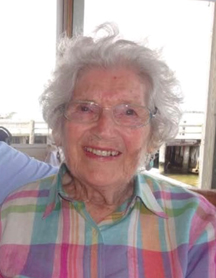 Teresa Harrington, a longtime Montauk resident, died at Southampton Hospital on February 14, 2021, after recovering from a fall at her home, and developing pneumonia. She was 97 years old. She was one of 12 children and was born in County Roscommon, Ireland.

She left her small town of Cloonkerin, Ireland in 1949 to come to an aunt in New Jersey and then came to Amagansett to join her sister, Mary Harrington Gosman, and her husband, Rob Gosman, to help out in their little seafood shack on the Montauk jetties. That small eatery, which served chowder and coffee to the local fishermen and families, expanded to become Gosman’s Dock Restaurant. Throughout the years, Mary Gosman brought her 6 children and many of her relatives from Ireland to help out in the family business, which grew to include two more restaurants, an outdoor clam bar, a seafood market, and numerous retail shops.

Teresa worked in Gosman’s kitchen, assisted by her sister “Bridie” (Bridget) Brohan. They chopped tubs of salad and cole slaw, old-school style. Her great niece, Diane Gosman of Colorado, who worked with her at the restaurant, called her “A work horse.”

“Teresa’s work ethic was amazing. My Dad (Emmett Gosman) would always compare people in the kitchen to her high standards. She always had a great laugh and smile. My Dad called her “Tessie,” and he knew she helped make that place a success.”

Christie Harrington, of Port Jefferson, who worked alongside his Aunt Teresa in the salad and raw seafood department during the 1970’s, said the irony was that “she never liked seafood—she hated fish, because she was around it all the time.” But he said she was one of his favorite Aunts. “She was smart and loved to read. I loved hearing her stories,” he said.

Like her sister Mary Gosman, Teresa also encouraged her Irish relatives to come to Montauk and work at the restaurant. Her Grand-Niece Anne Marie Foley, of Limmerick, Ireland, recalled how Teresa inspired her. “She was a big influence on me. When she came to Ireland for a visit, she encouraged me to come to the states, and I worked at Gosman’s as a hostess from 1992 to 1995,” said Foley, who now lives in Baiting Hollow, L.I.. “Teresa was light-hearted and spiritual. There was an inner strength about her and her siblings.”

Teresa Harrington met and married Jim Sarno, after coming to Montauk, and they made their home there, while she worked at the restaurant and he worked as a captain on private yachts including one for Hudson Wire Company of Tarrytown, NY. Jim and Teresa made many fishing trips with their executives, to the Bahamas and Florida, where they owned an apartment in West Palm Beach.

Another Irish relative Teresa lured to Montauk was her nephew, David Quigley, during the 1970’s. “I had just graduated from high school in Ireland, when I flew to Kennedy Airport and Aunt Teresa and Jim were there to greet me,” he recalled. “They took me to Montauk to meet my cousins, the Gosmans. I worked at the clam bar and restaurant. Teresa and Jim took me under their wing…their kindness was overwhelming. Teresa also threw me a birthday party that December and invited all her neighbors to meet her Irish nephew. She was like a mother to me at such a young age, creating an environment for me during those first few years to grow, succeed and experience life, and for that I will be forever grateful.”

Teresa’s daughter, Lynn Shavelson, of Chester, New Jersey, said her mother did many kind acts and good deeds for people in the community. “My Mom had a humility and unassuming way about her that drew people to her,” she said. “She was non-judgmental, and a great listener. There’s a big hole in Montauk now that she’s gone.”

Michael Gosman, a Grand-Nephew, who runs the Topside and Inlet Cafe Restaurants at Gosman’s Dock, said, “No one worked harder, no one was kinder, she was really the best of our family. She will be so missed.”

Teresa Harrington was pre-deceased by her husband, Jim Sarno, in 1981, and she also leaves behind a daughter and son-in-law, Lynn and Michael Shavelson of Chester, New Jersey, and dozens of relatives. She was cremated and interred in Fort Hill Cemetery in Montauk. A celebration of her life will be held at a later date, due to Covid restrictions.