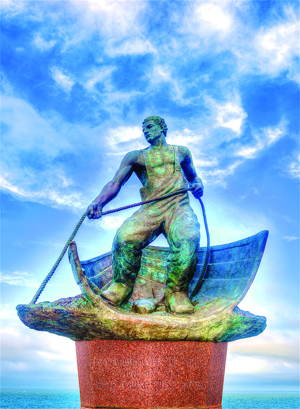 At the Eastern-most tip of Long Island, rises a statue of a lone fisherman, standing in his boat, pulling his lines from the sea. It is based at the cliff of the Montauk Lighthouse, where it was placed and dedicated about 20 years ago, to remember all the fishermen who have been lost at sea.

Before this bronze statue had been permanently placed at the lighthouse, there had been no place for the families and friends of these fishermen to mourn. They needed a place to have some form of closure, knowing their loved ones would never come back.

The idea came from a group of widows whose husbands had been lost at sea, including Mary Stedman-Farnham and Anne Hodnik. Stedman-Farnham had lost her husband, Captain Mike Stedman, when his boat, “The Windblown,” went down between Montauk and Block Island, with three other men, on March 29, 1984.  Stedman, 32, was lost at sea along with his crew, David Connick, 23; Michael Vigilant, 19; and Scott Clark, 19. All too young to die, and it was a great loss of lives.

A memorial service was held for the “Windblown” crew with over 500 mourners, at Most Holy Trinity Church in East Hampton on April 11, 1984. Among the crowd were Mike Stedman’s wife, Mary and their three children, and the families and friends of the other crew members.

Ironically, their steel hulled, 65-foot long-line trawler, “Windblown,” had gotten caught in a huge, unexpected storm, while they were tile fishing between Montauk and Block Island. Captain Mike Stedman had spent the past 12 years fishing the waters off Montauk, and his boat had weathered other storms. The only equipment he had back then was a single side band radio. The days of cell phones, GPS and sat nav were way in the future. They were expecting a front to come in a few days, with 20-30 knot winds, seas of 10-15 feet, which wasn’t pleasant, but he had weathered it before.

What ended up happening, was that this storm turned into a Spring hurricane, with winds originating in the southwest…the Carolinas were in its path and got tornados, killing 67 people. As the storm churned up the coast, it gathered strength and became more powerful. As it arrived in Montauk, it became a full blown hurricane and gusts of up to 120 miles an hour whipped the ocean waters. The Windblown did not stand a chance in waters like this, especially since the waves were up to 30 feet. No one really knows what happened, but it was common to have huge rogue waves pound the surf.

When the ‘Windblown’ failed to return, the Coast Guard searched from Cape Cod to Brooklyn with boats and helicopters. Eventually they found signs of the disaster—the Windblown’s emergency beacon, 15 miles south of the Point, a wooden door from the cabin, and some other small debris from the boat. One of Scott Clark’s shoes was pulled from the water, but nothing else was ever found, after the Coast Guard searched 25,000 square miles.

For these and others lost at sea off Montauk, it became necessary to have a place to mourn. So the idea for the “Lost At Sea Memorial” arose, and was made into a contest for whoever could create the best statue. The contest was held with over 20 entries from Long Island artists, resulting in about 25 memorial designs. The winner was artist Malcolm Frazier of Montauk. His design was unveiled before about 50 East End fishermen, town officials and local residents at Gosman’s Dock Restaurant in Montauk in 1996. About $200,000 had to be raised to cast the statue into bronze, which would weather the elements.

With all the community support, in this Montauk fishing village, the project was a success, and to this day, we still have a place to mourn any fishermen lost at sea.

The Lost At Sea memorial an 8-foot, 2,600 pound bronze statue of a fisherman is hoisted atop a 7-foot-high 12 ton granite base near the Montauk lighthouse. The base is inscribed with 120 names of East End fishermen lost at sea.