Having traveled extensively during the past decade we were looking forward to experiencing Dubai’s most iconic hotel, The Burj Al Arab. Although no longer the world’s tallest hotel, Burj Al Arab is still Dubai’s most iconic building, featuring the world’s tallest atrium at 180 meters (590 ft), residing on its own man-made island and resembling the billowing sail of a dhow. 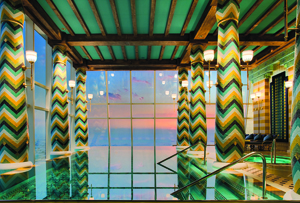 The Emirate of Dubai is located southeast of the Persian Gulf on the Arabian Peninsula and is one of the seven emirates (a province administered by the ruling class) of the UAE. We sailed through passport control and customs and right into Jumeirah’s arrival suite, located on the way to the main arrival hall. Here we were welcomed and informed that a host would guide us to the main entrance where the driver of a Rolls Royce Phantom was already expecting us. When we approached the stately white Rolls we got a last glimpse of our Rimowa luggage being stored in the trunk. We were seated, offered cold towels, drinks and a leather-bound music menu. A light jazz medley accompanied us to Jumeirah Beach where we reached the bridge leading to Burj Al Arab over the turquoise waters of the Arabian Sea, after thirty minutes. 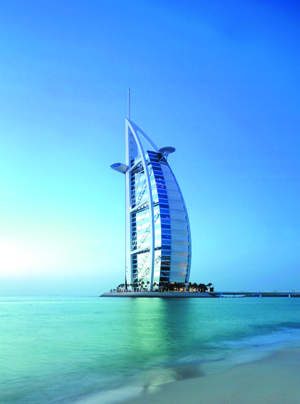 Our arrival at Burj Al Arab was of true Seven Star style. Four lovely hostesses and a host welcomed us in the tradition of Jumeirah – with warm smiles, more cold towels, Arabian coffee, sweet dates and chilled rosewater. Much has been written about the decorative style of Burj Al Arab, some overwhelmingly positive, some otherwise. One thing is for certain; entering Burj Al Arab for the first time and looking up the tallest atrium lobby in the world will definitely take your breath away. While the exterior of Burj Al Arab appears ultra-modern, its interior is an anthology of interesting and well-appointed copious styles, splendidly dressed in 24-carat gold leaf. On the way to the elevator that would usher us to our accommodations on the 19th floor, we passed fascinating water installations. It seems incomprehensible that fifty years ago Dubai had no running fresh water. Burj Al Arab hotel features twenty-one residential floors, accommodating two hundred and two suites, of which the smallest is just over 1,800 square ft. and the largest close to 8,400 sq. ft.

Upon entering, I stepped into the lower level of my duplex suite which featured a living room with a spacious lounge, a dining area for four, a bar counter and a guest powder room. A well-designed spiral staircase then lead me to the upper floor featuring my bedroom with a king-sized bed, a dressing room, and a lavish bathroom with a shower and a Jacuzzi tub. The bath facilities were set in precious, colorful Arabian-influenced mosaic tiles with a display of Hermes bath amenities. The butler mentioned that one may take the full-size His & Her set home if so desired. Here in the privacy of my suite with classy-cozy furnishings and Arabian influenced decorations, I was finally able to relax. While the butler was unpacking my Rimowa luggage I took a long, hot shower, slipped into my bathrobe, took my camera and succumbed to the beautiful views of the Arabian Gulf. After I got dressed we met for a tour of this fascinating hotel and lunch at the Al Muntaha which means The Ultimate or The Top in Arabic. 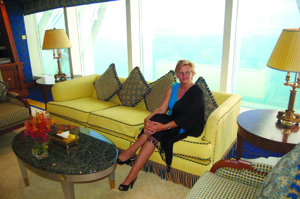 On the way to the elevator we passed the butler on the nineteenth floor, which inquired kindly after our wellbeing and asked if there was anything that she could do for us. There is a butler’s desk on every floor with butler service and another lift to the top floor with a panoramic view that we, unfortunately, did not get the chance to experience. Entering Al Muntaha restaurant is an experience in itself, 200 meters or 665 feet above sea level with unparalleled views of The Palm, the World Islands and Jumeirah Beach make the perfect match for the cuisine and service we experienced here. I had the hand cut Wagyu Beef Tartare as my appetizer and an exquisite pan-seared sea bass consisting of delicate white meat with a crisp crust cooked to perfection by a true master of his trade.

Unfortunately, being jet lagged and too tired to appreciate the weightless tunes of the jazz trio or the elegant company, we excused ourselves for the night shortly thereafter. Following a deep and relaxing rest, I awoke the next morning to a startling view set against the calm turquoise sea, which was actually surpassed when I emerged up from beneath the water of the infinity pool later on. Stunning is the only description for the views from the 18th floor over the Arabian Gulf, so is the pool’s dramatic setting. This pool belongs on the list of the most amazing aquatic structures of the world. The adjoining state-of-the-art Assawan Spa, spilling over two floors was perfectly appointed. The yoga and fitness studio boasts views of Palm Jumeirah, the smallest and the original of three Palm Islands. The level of service we experienced during our stay at Burj Al Arab was what one would expect from a true Seven Star hotel or resort. Until next month from another exciting location from around the world.

Author and Ambassador of www.Seven-Stars.com