Baby, it’s cold outside, or it will be soon enough. For those of us who have the pleasure of heat and warm clothing, we tend not to think too much about how our beautiful wildlife survive through these cooler and cold seasons. That is until we see a thin herd of deer cross a field of foot deep snow against frigid winds, while surrounded by naked trees and bushes.

Sure, it’s not easy for the deer but, these particular animals have been facing more and more adversity each year, and each year they tend to overcome. That’s an incredible act of survival in my opinion, specifically on the East End. The deer is not however, the subject of this month’s discussion. Instead, I’d like to talk a little about how some of our local wildlife species manage these cold, and sometimes frigid months of winter. 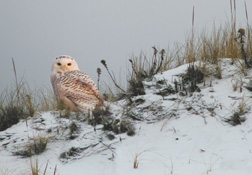 One species actually visits our wintery paradise pretty much annually by choice. I remember being in 4th grade when excitement filled the air in Amagansett, after a Snowy Owl perched itself on the roof of a nearby residence. Fast forward close to five decades, and today seeing a Snowy Owl is a bit more common if you know where to look. In retrospect, it still was a unique sighting back then because the Snowy Owl was large and entirely white, possibly a mature female, where today our landscape commonly plays host to male juveniles with darker bar markings. Ironically, while other animals may be struggling with a lack of available food during the winter months, the Snowy Owl visits our island to find an abundant rodent population, similar to their favorite cuisine of Lemmings (small rodents from the northern most regions of North America). It was believed by some, that during documented drops in the lemming populations, the smaller male owls cannot compete with the larger females for the limited food source, and because our treeless dune landscapes and open farm fields mimic their natural habitat, they find us quite accommodating during the winter. We’re certainly lucky to have them on the large list of amazing wildlife species here on Long Island.

The Red Fox also does well year round due to abundant rodent populations. Many people think they hibernate in their dens during the winter but, that’s not the case. There is one great relief to foxes during the colder months, and that is the freezing temperatures will kill the mites that cause sarcoptic mange. This is a common and sometimes debilitating infestation of mites that ravage our fox populations each year during the warmer months. It’s quite treatable if the animal can be captured and medicated properly in a controlled atmosphere but, those that cannot be helped really suffer terribly until the freeze kills the mites. At that point, severe hair loss, dry cracked skin and open wounds (from excessive scratching and rubbing)creates other obstacles for the fox to contend with during the bitter cold season. The fox does not fight the battle of mange alone. There are several categories of mange affecting wildlife, created by different, yet similar mites. Sarcoptic mange has been reported in over a hundred species of wild and domestic mammals. Often associated with canids (foxes, coyotes, wolves and domestic dogs), mange can also infect black bears, rabbits, squirrels, and raccoons. Another strain of mange caused by Knemidocoptes mites affect birds, and are common among captive exotic birds species as well.

Let us talk about hibernation. Hibernation is a state of inactivity and metabolic depression in endotherms. An endotherms is a warm-blooded animal/organism that is both capable and dependent on creating its own internal heat. An ectotherm is a cold-blooded animal that does not possess the ability to generate enough heat to keep themselves warm. Reptiles, amphibians, invertebrates, and most fish are ectothermic, while most mammals, including humans and most birds are endothermic. Depression of the metabolic rate is a biological process for preserving energy. This includes lowering of body temperature, and slowing down both breathing and heart rate. Combined with inactivity, hibernation can be achieved for those species that otherwise would find it difficult to survive during the winter months due to unavailable food sources, hard to find water and lack of shelter. We often think of bears when we think of hibernation but in fact, bears are NOT true hibernators and tend to leave their dens from time to time during the winter months. Some animals go into what is called torpor. This is similar to hibernation however, the reduction of body temp., metabolic rate (sometimes up to 95%), and inactivity is more short term rather than through the entire winter, which defines hibernation. 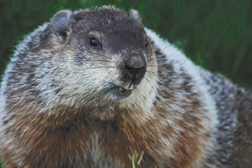 What species native to our area hibernates or becomes torpid? Chipmunks, bats, skunks, snakes, turtles and bees to name a few. Our biggest sleeper is the Groundhog, also known as a Woodchuck or Whistle Pig. In the northwest they are referred to as marmots. Many names for the same critter but, Punxsutawney Phil is without a doubt the most famous. And why is he famous? Because of his traditionally accepted prediction after awakening from his hibernating slumber. A groundhogs hibernation period can last from two to five months, during which their heart rate goes from a normal 80 to 100 beats per minute (BPM) to only five or ten BPM’s during their deepest sleep cycle. Hummingbirds actually go into a state of torpor but, not exactly hibernation. During this state of torpor, a hummingbird will hang upside down and in some cases appear dead. This is how they control their metabolism and conserve energy until temperatures warm up, and they fly away.

Many of our other terrestrial critters manage fine during the winter months. Omnivorous creatures in particular tend to find food quite easily, if not natural, certainly from a unattended garbage can. Another question I get asked often is, why don’t animals get frostbite? Actually, they can and do. There is an interesting, yet long explanation as to why many of our wildlife species seem to be more immune to frostbite. It involves something called “countercurrent exchange” and maybe we’ll hit on that over the winter. Meanwhile, even a duck, swan or goose will get frostbite on their webbed feet if they are not able to acclimate their tootsies to such an abrupt temperature change. Opossums are also often at risk of frostbite because of their hairless tails, bare feet and hairless paper thin ears.

All in all, our wildlife are masters of survival. Their actions and instincts can offer great knowledge to humans if we learn and observe with more compassion and understanding.