There is nothing more beautiful a vision than a family of Mute Swans gliding softly across a pond or lake. Both adults, standing guard front and rear, for the young cygnets in between. It’s hard to believe this magnificent bird is an invasive species, and not native at all to our country, or even our continent. It’s even more difficult to believe that these animals are facing serious reductions in populations at the hands of various state agencies who find these swans to be a nuisance rather than a beautiful addition to our vast wildlife spectrum. Once again, it seems humans are much too eager to use death as a solution instead of finding more humane ways to live WITH the animal. 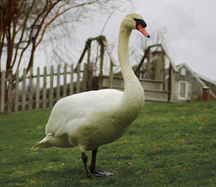 The Mute Swan is very intelligent, with a variety of unique characteristics that makes it a wonderful animal to observe. There are three species of swans in North America. The Trumpeter Swan and the Tundra Swan (also known as the Whistling Swan). They are both native to this continent; however, the Mute Swan is a Eurasian and North African species that was introduced here and now breeds in the wild. The Mute Swan gets its name for being less vocal than other swans. Also, while all other swans communicate with vocalizations during flight, the mute swan remains silent.

The Mute Swan is the second largest waterfowl bird. The first is the Trumpeter Swan. They are one of the heaviest flying birds. The adult male is called a “cob”, while the female is called a “pen”. A cob can weigh up to 26 lbs., the pen around 20 lbs. A length of 49′ to 67″ with an average wingspan of 94″ (that’s just under 8′). The cobs are much bigger than the pens, and so are their bill knobs. In fact, the knob at the base of the male swan’s bill swells during the breeding season and become even more notably larger than the females. The life span of a Mute Swan in the wild is 5 to 7 years. Here in East Hampton they have no major predators. Occasional poaching, dog attacks and speeding vehicles are their worst threat here, aside from those who simply want them extirpated because of their growing populations and invasive status. 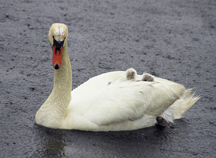 The Mute Swan is monogamous, and the mating pair does almost everything together from building and maintaining the nest to sharing the egg incubation responsibility and protecting the offspring. Only about 3% to 5% of roughly 5,000 species of mammals are monogamous. Ninety percent of birds are socially monogamous, but not necessarily sexually. The Mute Swan’s bond with its mate is quite solid, and rarely will they change partners unless one dies. When a Mute Swan’s partner dies, it exhibits behavior often compared or

referred to as grief or mourning. The Mute Swan may begin vocalizing repeatedly or more often, it’ll wander on the ground as if in search of their lost mate. This is particularly the case when a pair is separated during flight (storms, collisions, etc.) and one swan goes down. Due to the weight of a Mute Swan and its large wingspan, it cannot just land on a dime. To retrieve a fallen mate would start with a wide circling attempt to land, hopefully in a safe location close to where its mate went down. This is most often not the case, and that’s when the search begins. After the “mourning period” the Mute Swan will search for another unattached or widowed mate. If a male loses his female mate, and he finds a younger mate, she will join the cob on his turf (territory). If at the male mates with an older female, he will join the pen on her turf. If a female loses her mate, she’ll usually find a new younger mate quite quickly. 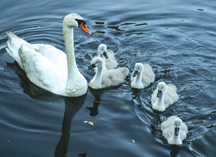 Mute Swans form their nests into large mounds of waterside vegetation. You’ll find them in shallow waters, islands or edges of water bodies (ponds & lakes). They often reuse the same nest each year, maintaining and sometimes rebuilding when necessary. The female will lay 4 to 10 eggs and roughly 36 days later the young will hatch. The babies are call cygnets. Most young are not white, but rather a grayish color with a dark colored bill. Cygnets that are all white have a leucistic gene (we talked about leucism in the Dec. 2018 issue). They go from hatchling to adult in only 3 months’ time, but their gray color sticks with them for the first year. The young don’t have the ability to fly until 4 or 5 months. After 3 years, an adult swan reaches sexual maturity and can breed once a year, with a mate they will stay with until death. Another one of nature’s beautiful and natural circles.

Mute Swans are most vulnerable during the molt, when they are grounded and cannot fly. The entire process usually takes 6 weeks and only one from a pair will molt at one time. This allows the other swan free to protect the young. Molting usually occurs in Mute Swans around August through September. Non breeding swans must also molt and they often do this during the month of July. The most common danger to a cygnet is the common Snapping Turtle. The cob is responsible for protecting the cygnets while on the water, but there is little defense from a quick and lethal danger that strikes from below the water’s surface. Otherwise the Mute Swans size and power is enough to keep most predators (raccoons, foxes, dogs) at bay until the swan and its family can retreat to the water. Even humans must be cautious when faced with a swan protecting her nest, young and even just a mate.

Unlike other swan species, the Mute Swan is strongly territorial. Ideally, they prefer 4+ acres, but as that has become increasingly impossible, their tolerance to be more confined with other pairs or individuals has increased as well, but not always. In an aggressive or defensive state, the Mute Swan can be quite intimidating. If their verbal hissing doesn’t ward off a threat, they can physically attack by slapping their large wings against the threatening creature. Their wings have hard bony spurs that intensifies the winged beating. They also will bite, which is equivalent to a nice pinch. Although they do not have the power to break an adult human leg as rumored, they do have the potential to cause serious injury if necessary. The familiar pose of their 23 vertebrae neck curved back and wings half raised while jerking through the water is called “busking” and is a threat display. Occasionally, you might see a Mute Swan displaying this pose during a breezy day in an attempt to catch wind to drift longer distances, like across a large lake. The behavior is similar to windsurfing. Mute Swans also have great memories. They even remember those who treat them good, and those that do not.

Swans feed on both submerged aquatic vegetation and land based vegetation. They use their long necks to dive for the submerged grasses. This eventually turns their white heads and necks to a light orange tint due to the waters iron content as well as tannins (naturally occurring polyphenols found in plants, seeds, bark, wood, leaves, and fruit skins). Mute Swans, contrary to their names, hiss, grunt, whistle, whinnie, and snort, especially when communicating with their cygnets. Their most familiar sound is the vibrant thumping of the wings during flight that is unique to the Mute Swan. It can be heard from a half or up to a mile away depending on additional ambiance noises.

In conclusion, one more quick fact regarding the phrase “Swan Song”. The phrase refers to an ancient belief that swans sing a beautiful song just before their death, having been silent, or mute, during most of their lifetime. Neither part of that rumor is true. It is now used as a euphemism for a person’s final gesture, public performance or professional activity before retirement.

Remember folks, swans and ducks may eat the bread you feed them, but it is NOT good for them at all. Feed them what is healthy, like chopped greens, peas, seeds or waterfowl feed is the best. Feeding them the proper diet will keep them healthy and happy, and that’s important why? Because WILDLIFE MATTERS.