Courtesy of Montauk Chamber of Commerce 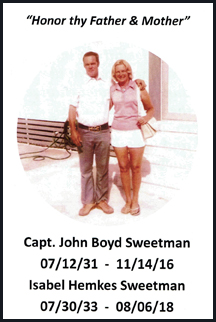 Capt. John and Isabel Sweetman were married on April 5, 1973. Capt. John ran a successful Charter Boat, “Ebb Tide” during the 1970’s and 80’s. On April 4th and 5th, 50 family members converged on Montauk to honor their father and mother by 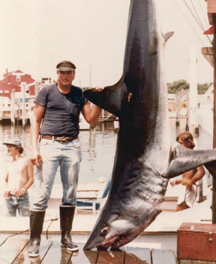 bringing their ashes on the anniversary of their wedding day, April 5th, to the place they called home, Montauk. They both loved Montauk so!

Their son Jim Sweetman, also a fisherman, caught an 841 lb. Mako shark on the Ebb Tide in August 1979. The Mako was donated to The Montauk Chamber of Commerce by his father, 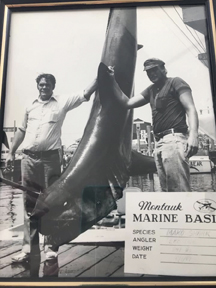 John, where today it remains on the wall in the front office, and is quite the conversation piece for many who visit the Chamber. The plaque below it reads:

The family would like to acknowledge the following people and businesses for making this special visit back to Montauk so enjoyable: Snug Harbor Motel, TJ of The Ebb Tide II, The Viking Star Staff, Jason Walters of the Montauk Lighthouse, and Enzo Burriesci of Primavera Pizza.