Montauk lost another fishing legend on November 9, when Captain Ken Bouse died, after a long battle with cancer. He was 77 years old. For many decades, he was known around Montauk as an experienced sport fisherman, and as a motorcycle enthusiast.

Capt. Bouse was born and raised in Bayshore, where he started fishing at nine years old, and he first came out to Montauk in 1951 on a Harley Flathead motorcycle with his brother, Dave, known as “Davey Crockett.” Ken Bouse got a job on a boat called, “The High Seas” and when the season was over he went back to Bayshore. He came back and freelanced on different boats, then went to fish in Fort Lauderdale. He joined the Army in 1953, where he was stationed in the Far East and Germany for three years, and then returned to fish in the Bahamas, Central America, and Australia, for black marlin. He then fished in California, and eventually came back to Montauk to run private charter-fishing boats. He went to work with Capt. George McTurk on the “Sportfisher” and then he bought his own boat, the “Peggy S.” in 1977. He docked it at Darenberg’s Marina, and then for many years at Duryea’s Dock, next to Capt. Bob Tuma on the “Dawn” and Capt. Rick Etzel on the “Daybreaker.”

In 2013, Capt. Bouse was honored at the 12th annual Montauk Mercury Grand Slam Charity Fishing Tournament at Uihlein’s Dock, by the East Hampton Kiwanis Club and the Montauk Friends of Erin. Accepting his plaque, for “Fishing Legend of the Year,” Capt. Bouse recalled that when he first started fishing in the 1950’s, “all we had was a compass and a radio. Fishing was different back then—you really had to know what you were doing—we had no Lorans or digital equipment like today.”

At the tournament, Bouse said although he had some “rough times at sea,” over the years, he most enjoyed the offshore fishing, for giant tuna, swordfish, and marlin.

“I’ve had a good time since I rode out to Montauk, when there were few marinas here, and I’ve watched Montauk grow up,” he recalled.

Capt. Bouse also won the U.S. Atlantic Giant Tuna Tournament, out of Point Judith, R.I., while working for Captain George McTurk. Besides fishing, his other passion has been riding motorcycles for over 70 years, and he has owned about 30 of them.

When I first met Capt. Bouse in the 1980’s, his charter fishing boat, “Peggy S.” was moored beside my father’s boat, “Dawn” at Duryea’s Dock, and I was always amazed at how much energy he had, to fish all day and ride around on motorcycles, with his long dark hair and beard. He and my Dad, Capt. Bob Tuma, would share fishing stories and laugh about all their adventures. Ken was a popular and colorful figure around the docks, and he loved fishing.

The last time I saw Ken was about a month ago, in his home, battling the cancer that eventually took his life. His devoted daughter, Amy, was living with him and helping care for him. He also had a son, Ken Bouse. One of his good friends, Sean Geary, of Montauk, had also dropped by that day, and we were all laughing and talking about the old days in Montauk. So many fishermen and local people will miss Capt. Ken Bouse.

A wake was held for him at Yardley & Pino Funeral Home in East Hampton, and a funeral service was held at St. Therese of Liseux Roman Catholic Church in Montauk. He was buried at Calverton National Cemetery. 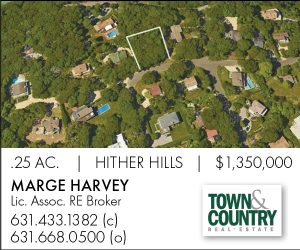