Each year the Hampton International Film Festival (HIFF) hosts a SummerDoc Series in the Hamptons. In October its huge film festival arrives over the four days of the Columbus holiday weekend. Throughout the various towns in the East End, all summer long, a different documentary film is presented for movie goers to enjoy. The next film showing in August is perfect for the Montauk seaside resort, known for its outstanding surfing. Take Every Wave: The Life of Laird Hamilton will screen on Friday, August 4th at Gurney’s Montauk Resort & Spa. As with most of these documentaries, there is a post screening conversation. For this film it will be Director Rory Kennedy, Laird Hamilton, Gabby Reece (his wife) and Alec Baldwin. 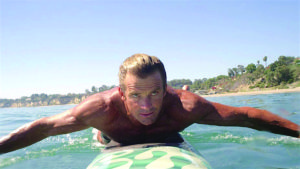 Laird Hamilton is known as a big wave surfer and the co-inventor of tow-in surfing. He has done fashion and action sports modeling in his long career. TAKE EVERY WAVE: THE LIFE OF LAIRD HAMILTON tracks his remarkable life and his legendary career. “Much admired by the public, though often disdained or ignored by the surf industry itself, Laird is a unique sports icon, an athlete who has refused to compete professionally yet has dominated big wave surfing as no other figure in history ever has. Laird’s biographical story is told against the backdrop of a winter surf season on Kauai, where El Niño storm systems threaten to bring the biggest surf in decades. Mixing never-before-seen archival footage with contemporary verité scenes shot in Southern California, Bermuda and Kauai, Take Every Wave weaves the past and present into an intimate and compelling portrait of a superstar athlete at the top of his game. Threaded throughout is a revealing, deeply personal interview with Laird, as well as conversations with the family members, friends, collaborators and detractors who know him best. TAKE EVERY WAVE provides an intimate, uncompromising look at a lifetime devoted to riding giant surf—and the price an athlete pays for greatness.” Tickets are $50 each. Gurney’s Resort is located at 290 Old Montauk Hwy, Montauk, NY 11954. To purchase tickets or for more information http://hamptonsfilmfest.org/summerdocs/