Hello and welcome to this month’s Montauk Fire Department Corner. I trust everyone had a nice and safe Memorial Day weekend and you are getting into the swing for the busy summer months.

One of the several drills that we conducted this month was held at the Larry Franzone Firematics Training Center in Wainscott. Please enjoy the photos of this drill, courtesy of Michael Heller. 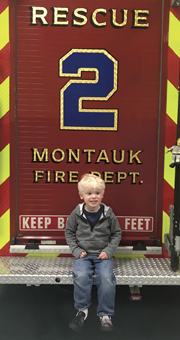 It looks like Ronan C. Shea had a wonderful tour of the Montauk Fire Department on Memorial Day. His tour was followed by some chocolate candy, compliments of his buddy Dick White.

Statistically, we are seeing the number of calls for service rise, which is the norm for this time of year. For example, we had 63 ambulance calls in May 2019 (14 more than May 2018). 21 calls for service were between 8 p.m. and 6 a.m.; 7 calls were drug/alcohol related; 18 trauma emergencies; 30 medical emergencies; 2 motor vehicle accidents and 6 fire calls.

Ordinarily, this is the section of MFD Corner that would profile one of our Members, to share some insight into who we are and what we do in the Montauk Fire Department. Instead, this month I’m delighted to profile the department’s five MFD Scholarship Winners for 2019. 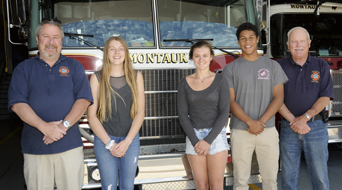 First, here a little background on the Montauk Fire Department’s scholarship program. The program was started 49 years ago in 1970. That year, one scholarship of $400.00 was given. Over the past 49 years the program has grown to annual scholarships totaling almost $50,000, including a scholarship of $1,000.00 for a Montauk student through the East End Financial Group. The scholarship committee is made up of five Members, three firepersons and two non-fire department volunteers. Lieutenant Herb Herbert has been on the committee since it started in 1970, and has served as Chairman for over 25 years. Dick White Jr. and Ed Ecker Jr. are the other two fire personnel on the committee. Jean Masin and Iris Mitchell round out the committee of five. The scholarships are named in the memory of Montauk Firemen who have passed on, and who had a connection to the Montauk Public School. The Don Truesdale, Hank Zebrowski, John Mulligan, and Skip Cannon Memorial Scholarships are a beautiful, lasting tribute to these firemen, and to the entire Montauk Fire Department. I think one of the most impressive things concerning these scholarships is that the department has given out over $1,000,000.00 in 4-year scholarships to Montauk kids who are going on to college and/or trade school. None of the scholarships are from taxpayer funds. All of this money has come solely from donations through fundraising. Funds are placed in an endowment where only the interest is spent.

That’s it for this month’s Montauk Fire Department Corner. Thanks for reading and for keeping up with the MFD. Have a pleasant and safe Fourth of July weekend.