As the main event draws closer, the anticipation for the Montauk Friends of Erin St. Patrick’s Day Parade increases. The town is prepping for a new season and the parade is the signal that it’s right around the corner. Along with the overwhelming approval of this year’s choice for Grand Marshal, Gordon Ryan, the buzz is whether or not one of his icon floats will make an appearance? 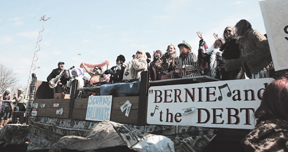 In the early ‘80s his company, Promised Land Salvage, whose motto was- call us if you need a couple of jerks, which originally was for maritime towing, became the avenue for a new venture with his buddy Tom Melore; sneaking into the Montauk St. Patrick’s Day Parade to save the entrance fee. Of course, it wasn’t until after the 2nd year that they learned that there isn’t an entry fee to be in the parade! Year one was “Geek Surf Club”, a VW Dune Buggy with surfboards hanging out and two crazy surfers hangin’ loose. They made it 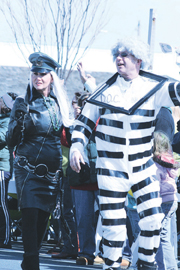 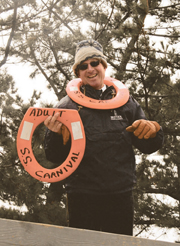 as far as the Shagwong when the crowd tried to pick up the buggy and bring them into the Shagwong. The next year, to be safe, they used a pick-up. Still, the crowd could reach in and steal their beer. Finally in year three, after being told they were messing up the order of the parade, they signed up and graduated to a flatbed. The rest is history- each year spectators look forward to the creative, timely, often politically motivated Promised Land Salvage float making its way down the parade route.

Even if there’s no float, Gordon will be leading the festivities down Main Street on Sunday March 24th, beginning at Noon. Only this year, he’ll be the one marching in a top hat and tails. This will follow a long list of appearances at St. Patrick’s Day themed events including The NYC St. Patrick’s Day Parade on March 16th. Closer to home, you can join Gordon and his family and friends  at the Grand Marshal’s Luncheon and Roast, at Gurney’s Montauk, on Friday, March 22nd, or on Saturday March 23rd, also at Gurney’s Montauk for the Gala Cocktail Party from 4-8pm.

During our conversation, I realized that Gordon may be just a little nervous about the Grand Marshal Luncheon where during the roast, a few other stories from the past may emerge. His fears may come to fruition, we’re hearing that the big guns are warming up; Eddie Ecker, George Watson among others- it should be a roast to remember.

Gordon is a long time resident of Montauk and the East End. He grew up in Babylon and eventually his family moved to Westport Connecticut. As a youth he competed in horse jumping competitions, but quickly dropped that when he discovered surfing and skiing. Now he’s an avid Sunfish surfer on the bay in Amagansett near his house. And if you ask Gordon how he ended up in Montauk he’ll tell you “It’s because of a car thief,” and then he’ll add, “And I’m married because of a bouncer.” Which I’d say are stories worth telling…

After graduating Loyola, New Orleans, and passing the Bar in Vermont, he started practicing law. A year later, he passed the NY Bar and came to Montauk to surf in the summer while working here as well. At one point his Montauk 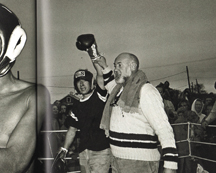 friends warned him “Be careful, you’ll get stuck here for winter.” Which he dismissed since he loved his winter life in Vermont. However, early one November the warning proved true. He was in Boston when his car was stolen, he took a train back to Montauk. Having no money to replace the car or to move back to Vermont, he stayed, expanded his law practice, and never left. Hence the ‘car thief’ story.

Now for the ‘bouncer’ half of that comment. One night he was walking into a local bar where Billy Christman was at the door. Ahead of him 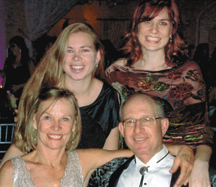 was a beautiful girl whom Billy immediately followed and started putting the moves on. To escape this rather large bouncer’s advances, the girl turned to Gordon chatting him up. He and the lovely lady Dianne eventually got married and had three daughters.

Over the years, Gordon Ryan’s life has been enriched by his many experiences and relationships. Fortunately for our community, his life has also enriched ours as it weaved its path through numerous jobs, and volunteer activities and events; including establishing the East Hampton Youth Court, participating in a historical Montauk Boxing Match, and lest we forget ‘Mr. Amagansett”.

With all his activities and accolades throughout the years, and although he admits that he did think if he kept making the floats he’d be safe from being chosen, Gordon says, “Being chosen as 57th  Montauk Grand Marshall, is the Best Honor I’ve ever had.”

Congratulations Gordon – the Friends of Erin are thrilled you’ve accepted their invitation, you deserve it. They are looking forward to enjoying the upcoming festivities with you.