This 2018 season is in full swing! The action has really heated up for just about all species, both inshore and offshore. 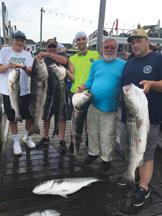 After a delayed start, due to cooler water temperatures and never ending Nor’easters, the Striped Bass showed up with a vengeance. Trolling and Live baiting, worked equally. The “Elbow” and “Flood tide Rip” were the hot spots. The action couldn’t of been better. Along with the arrival was the massive schools of Bunker, that came out from the west. We already had the sand eels show up, but then even more of them arrived too. Now the Chub Mackerel are on the south side down off the town area about 2-3 miles offshore. There is a immense amount of bait around the point this season and that is a great thing! 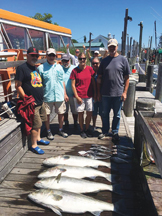 Fluking has been very good for the action, but there was not a lot of keepers coming over the rail at first. Loads of 17-18 inch fish were being caught, which is a good sign for future seasons to come, but not for the anglers looking for a Fluke dinner! Now that the water temperature is warmed up, the bigger Fluke have showed up. Depending on the wind and tide the Rips have been producing fish as well as Cartwright and Rocky Hill. It is improving by the day!! Remember, 19 inch length and 4 fish per angler for the Fluke. 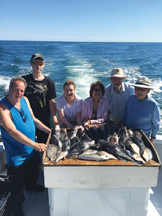 Offshore report is just as good! Shark fishing has been steady and action packed. The new 83 inch limit for the Mako sharks was introduced this year, whichwill insure good catches for the future. Nevertheless, some really nice sharks have been caught already, and it’s not even August. Circle hooks will hook into the corner of the sharks mouth, allowing you to release the shark practically unharmed, for a future fight!

The Tuna bite is on too! Anglers found the Tunas at Atlantis canyon, 125 miles off Montauk. A nice warm water eddy moved in there and there were Yellowfin and Bigeye tuna jumping on the lines. Along with good weather that made the trip possible, anglers that had never experienced offshore Tuna fishing in the Canyons were richly rewarded. Now these warm water eddys that spin off of the Gulfstream don’t last forever, they dissipate. So you have to watch your Offshore sea temperature reports to locate the next eddy. Very important to bring plenty of ice. Tuna are very fragile and spoil quickly. They literally cook from the inside out. Gut and gill them immediately, then put them in a ice and salt water brine.

It’s a Fantastic season, if you’re thing about going fishing, now’s the time!!!