An Alpine Town for Christmas…in Georgia!

To be honest, we’d never heard of Helen or the longest running Oktoberfest in the country until our friends Lucy and Dan invited us to visit them at their mountain home, located about six miles from Helen, Georgia. The city of Helen is tucked away in the foothills of the Blue Ridge Mountains, just a couple hours north of Atlanta. Formerly a logging town that was in decline, the city resurrected itself by becoming a replica of a Bavarian alpine town, in the Appalachians instead of the Alps. This design was, and still is, mandated through zoning first adopted in 1969, so that the classic south-German style is present on every building, even on the small number of national franchisees such as a Hampton Inn, Fairfield by Marriott, Econo Lodge and Day’s Inn. The Chattahoochee River winds through the middle of town giving the landscape amazing similarity to some of the villages in Bavaria. Chalets, cobblestone alleyways, and shopkeepers dressed in Lederhosen and Dirndls certainly add to the old world charm.

Marcus and I had visited the Bavarian town of Frankenmuth, Michigan a few years back and found it delightful, but that was during summer. Like Helen, Frankenmuth is also known as a year-round festival destination and the Octoberfest in both towns is a big to do. However this would be the first time that we’d be attending a real Octoberfest other than in Germany. Helen hosts its Oktoberfest from late September to early November and is the longest-running Oktoberfest in the country! During this time German-style bands from all around the nation and the world perform on stage in the ‘Festhalle’. 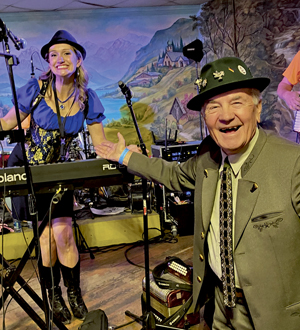 Tourists from all over come to watch the cowbells ring, the Alphorns blow, and the accordion be squeezed while they eat and drink at the Festhalle’s rows of long tables. Our hosts Lucy, dressed in a beautiful dirndl and Dan, in a traditional Bavarian Sunday suit, performed the Waltzes, Polkas and the Chicken dances like pros while we had a hard time following their steps and their never ending energy. Dan just celebrated his 80th birthday! The band that kept the audience captivated all night was Mollie B and the Squeeze Box band. The talented, nationally recognized polka band kept the highly motivated audience on their toes with their eclectic tunes and showmanship.

After a good night’s rest in Homa’s charming mountain house and a hearty home-made breakfast, Lucy and Dan took us to their church in Cleveland where we all attended the Sunday morning Mass at St. Paul the Apostle. Father Fabio Posada’s service was one for the heart! We very much appreciated meeting him personally after the service and I, the non catholic, welcomed his blessings. Afterwards we all went for coffee to the cool JumpinGoat Coffee Roasters cafe in close-by Cleveland where we enjoyed each other’s company besides the views of the land, the lemon cookie and meeting Heather Sparks, a holistic healing specialist with a beautiful aura. JumpinGoat Coffee Roasters derives its name from the legendary discovery of the coffee ‘cherry’ by Kaldi, an Ethiopian goat herder. Kaldi, noticing that when his flock nibbled on the bright red berries of a certain bush they became more energetic (jumping goats), and chewed on the fruit himself. His exhilaration prompted him to bring the berries to a holy man in a nearby monastery. But the holy man disapproved of their use and threw them into a fire, from which an enticing aroma billowed. The roasted beans were quickly raked from the embers, ground up, and dissolved in hot water, yielding the world’s first cup of coffee.

Of course Lucy and Dan then took us all over the charming Alpine city of Helen, and since it was a beautiful early fall day I quickly gave up putting my camera away. After a delicious lunch back at the house we rode about a quarter mile down the hill from Lucy & Dan’s house to the Serenity Cellars Winery. How lucky are they? Serenity Cellars is a family owned, old-world Tuscan inspired boutique winery specializing in old world style wines and the setting there is spectacular! 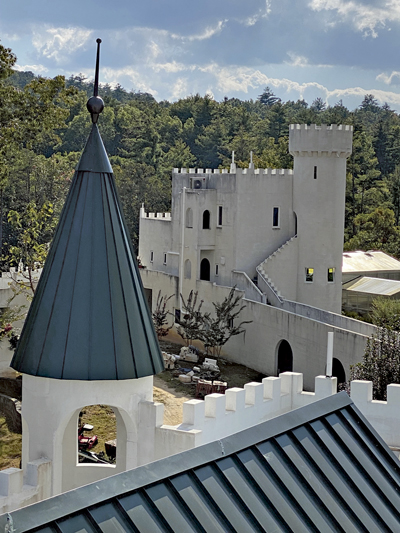 What we got to experience next seems incomprehensible to a fast paced world of immediate gratification. Uhuburg, a Renaissance Castle, located just up a mountain side of Helen, is a philosophical, food producing, naturalistic, and celebratory place unlike any other! Named for the largest owl in the world, the Eurasian owl in German is called Uhu, and Burg is the German word for castle. Thus, the English translation of the German term Uhuburg refers to Eagle Owl Castle. 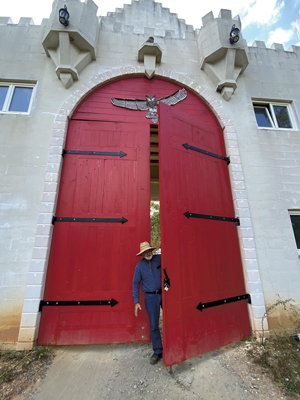 Lucy and Dan had met Bob Marthai and his wife Jenine, the owners of Uhucastle, through mutual friends one night while dancing the Polka at the Festhalle in Helen. Bob Marthai, an ex-psychologist, retired tall ship captain and naval architect had dreamed of building a castle in the mountains of Northern Georgia and has been working now on his dream castle for over a decade with his wife and daughter and a small crew. Uhuburg has twelve towers, a turret, three gatehouses, an eight story lookout tower, a great hall, cloistered walls with rampart and lower walkways, ten guest chambers, two apartments, a master chamber, tropical atrium, grotto, and two acres of courtyard gardens. Situated on a mountain knoll, the castle offers spectacular views from each of the walls and towers. 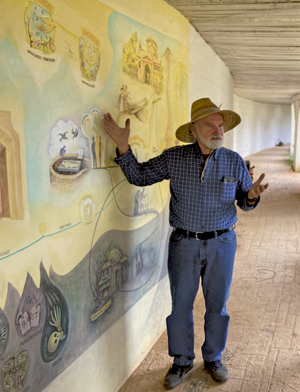 A series of murals line the inside of the cloistered walkway. Bob Marthai feels that the artwork depicts how humankind has tried to understand life and faith throughout the ages. The murals summarize key ideologies, stories, and applications of various philosophies and religions. Uhuburg features a produce garden, vineyards, greenhouse, tropical atrium, demo gardens, a native garden, orchards, mushroom room, and flowering gardens throughout the courtyards. Mind boggling if you ask me. Grand Opening is expected in spring of 2023, but, check their website for ‘Insider’s Pre-Opening Tours’. www.uhuburg.com

The next morning on the way out of town we stopped at Hofer’s Bakery and Cafe, founded by Horst & Gerda Hofer who moved from Schwabach Germany to America in the late 1950’s, to take home some fresh bread. German Christmas Stollen is also available! Helen, renowned for its endearing, fairytale-like alpine aesthetic somehow becomes even more magical during the holiday season.

The town’s Alpine architecture and holiday scenery are so delightful that Lifetime Christmas movies “Christmas Love Letter” and “A Taste of Christmas” were filmed here, and the town is consistently noted as a top holiday destination for lights, festivities and fun. You may reign in the holiday season as your ancestors did during the Victorian era by paying a visit to the Hardman Farm Historic State Site, where reenactments take place every Friday and Saturday night in December. Thanking our dear friends Lucy and Dan Homa for an incredible weekend escape back into the old country! Frohe Weihnachten! www.HelenGa.org