I am certain that there isn’t a person around who hasn’t heard of American explorer and frontier man Daniel Boone! Located high in the Blue Ridge Mountains of western North Carolina lays the city of Boone, named after Daniel Boone, who frequently camped within the city limits during the 1700’s. Boone, the county seat of Watauga County, and home of the Appalachian State University, is known as the heart of the High Country and listed in two editions of The 100 Best Small Towns in America. Let me assure you that though a city in size, Boone feels more like a small, friendly, fun, artsy, foody, cool, adventure driven mountain town. No surprise that when National Geographic Adventure Magazine ranked the top 50 adventure towns in the US, Boone took top honors as North Carolina’s premier outdoor adventure destination. 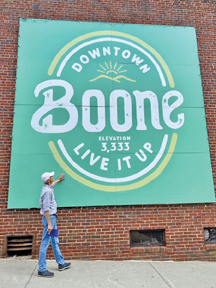 We’d started our search for accommodations on www.exploreboone.com and the history buffs that we are went for The Lovill House Inn, a historic home built by Captain E.F. Lovill in 1875 and lived in by the Lovill Family for 100 years. Ideally located within walking distance of downtown Boone and the AppState Campus, the luxurious Lovill House Inn Bed & Breakfast turned out to be the perfect retreat. www.lovillhouseinn.com

We kicked off our North Carolina High Country adventure within steps of its historic main street at the Lost Province Brewing Co. located in a historic building that once served as an automobile showroom and later as the offices of a local newspaper. Here in these light-filled, fun brimming halls we ordered a delicious, savory, wood fired thin crust pizza and of course a fresh drawn craft beer for my mountain man. While there are several other microbreweries in the area, this family-owned place should definitely be on your fun list.

We had received great advice from the Explore Boone visitors bureau of places to see and events not to miss during our 2 night stay and that included the Historic Downtown Walking Tour. We started at the Jones House and followed the map along the roughly 1.25 mile loop through downtown. The walk featured 27 points of interest, including historic buildings, monuments, and markers, as well as town parks and cultural sites, including Boone’s very own Mast General Store. www.exploreboone.com

Along the way we explored the Appalachian State University’s Turchin Center for the Visual Arts, and the Innovative Hands Gallery, founded by a small group of craftspeople in 1975. One of the charming downtown stores that I could hardly tear myself away from was the Common Good Co. By the time 3:30 pm came along we found the most important place for any traveler, the coffee shop, wink, wink! Espresso News, nestled in the heart of downtown Boon served a great community of locals, students, and coffee lovers from around the world. “We roast our beans in a Diedrich IR-12 with the utmost of care combining art and science.” These guys got the art and science down!

Dinner we had on our first evening in Boone in a charming little French Restaurant, located in a strip mall kind of setting, no kidding. “Joy Bistro” is a family-owned French-American restaurant. We enjoyed an exquisite dining experience, service to palate. Put it on your list and don’t forget the bread pudding for dessert.

We had no idea that Boone is the center for Bluegrass musicians and Appalachian storytellers but followed Ms Emily’s advice to stop after dinner at The Jones House for some “Old-Time Jams, Local History & Art in the Mazie Jones Gallery”. The Jones House was built in 1908 as a family home by Dr. John Walter Jones, he was one of the first physicians in the area and this family home was the location of his first office. Here in the warmth of a group of local musicians we got to listen to some of the most delightful tunes of Bluegrass! 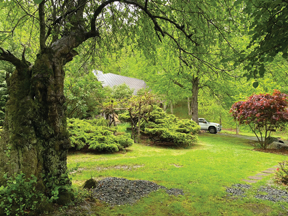 After a good night’s rest and an excellent freshly prepared, all organic breakfast cooked by Ms Ann, the keeper of the Inn, a chef herself, we went off to explore the grounds and waterfalls of the 11 acre estate surrounding the The Lovill House Inn. In the early morning mist, with spring flowers budding all around, it was easy to imagine why brides would choose this place for their wedding. Interestingly, this cozy Inn is fully ‘off the grid’ and has several Tesla Stations, covered with a solar roof, to use in their parking lot. 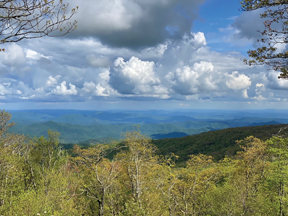 The exit to the famous Blue Ridge Parkway is close to town and we were heading out to explore Price Lake, which turned out to be a memorable (all in spring bloom) 2-1/2mile hike for us. Price Lake is definitely also a wonderful place to paddle, rent a canoe, rowboat, or a kayak, at the on-site rental facility that also sells bait and rents fishing tackle for anglers! The stunning views and overlooks of Grandfather Mountain and the amazing valleys and peaks all around make riding along the Blue Ridge Parkway an experience worthwhile during any time of the year. 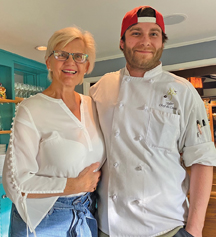 Time for lunch! Yup, we are always looking for awesome eateries, considering that I cook at home daily. Our ‘Escapes’ are not only getaways from the beautiful places we live in but also a break from the kitchen. Don’t get me wrong, I love cooking, but it isn’t always easy to travel and find good and heathy food, unless you’re in Montauk, of course. Reid’s Café in Sugar Mountain, located at the base of Grandfather Mountain, between Banner Elk, Linville and Foscoe, it is. I had one of the best Cheese & Charcuterie trays ever!

On the way back to Boone we stopped at Grandfather Vineyard in Banner Elk where the Tatums have achieved the reality of owning a Vineyard & Winery that started when they first planted their grapes in 2003 and opened the doors of the winery in 2011 as the first producing winery in Watauga County. “There is nothing quite as relaxing as sitting on the banks of the Watauga River in the shadow of the beautiful Grandfather Mountain. Add our award-winning and various wines and there’s no place you’d rather be than at Grandfather Vineyard!” We whole heartedly agree!

To be honest, by the time we got back to The Inn we had exactly 15 minutes to freshen up, change and get back on the road to what we consider Boone’s most famous restaurant. We were told that we wouldn’t have fully experienced the Boone region until we’d dined at The Gamekeeper. Built in the 1920s, The Gamekeeper, originally the Yonahlossee girl’s camp, opened its doors in 1922. Ken & Wendy Gordon, the owners of the romantic Gamekeeper had met as students at Appalachian State University and decided to preserve the rustic charm of the historic cottage and celebrate ‘game cooking methods’ such as Elk, Bison, Deer, Emu, Duck and then some. It was an honor to meet the gifted executive chef personally! Reservations only!

Every Saturday morning the Watauga County Farmers’ Market is held in Boone. So right after a hearty breakfast at Melanie’s, a local breakfast and lunch cafe in downtown, we head out to Boone’s town square to get some of that amazing, crusty bread we’d heard of. We spotted lots of fresh, organic produce, locally farmed meats, eggs, breads and crafts and listen to the spirited sounds of a mountain band. WCFM is a 100% producer-only market.

Adjoining the Farmer’s Market we found the ‘Horn in the West’ Daniel Boone Amphitheater as well as the Hickory Ridge Living History Museum compound where Marrena Greer welcomed us to a guided tour of what life was like when the Western North Carolina high country was first being settled. Focused on the period of 1785 – 1805, the museum provides insight into the self-sufficiency of our forefathers by highlighting the skills they possessed such as hearth side cooking, spinning, candle making, and blacksmithing. Btw, ‘Horn in the West’ is celebrating its 70th season this summer!

Last, but by no means least we decided to catch brunch at Vidalia on the way out of town. Vidalia, located in walking distance to The Lovill House Inn and Boone’s downtown, is a small bistro-style restaurant serving delightful upscale “creative American cuisine.” My avocado toast plate was out of this world! Grilled sourdough bread, toasted chic-peas, avocado spread, pico de gallo, sunny side up egg, micro-greens, home-fries, fresh fruit! A winner!

In the future, whenever I think of North Carolina’s Highlands, I ‘ll think of Boone; a charming, clean, historic, young mountain town with incredible farm to table restaurants, great service, friendly people, and a slower, kinder pace of life!