And that’s really all we had, one night, basically a stay over, on our way back north from Key West. We are actually both more into discovering smaller towns and their countryside but I fell for visitflorida.com’s slogan “Miami Beach is everything you’ve heard about, but you have to see it for yourself.” 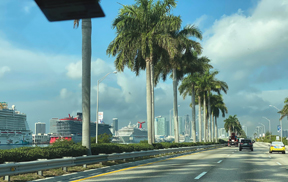 Well, Miami South Beach started off as farmland in 1870 and boasts today the third tallest skyline in the U.S., trailing only New York City and Chicago with over 300 high-rises. This area was the first section of Miami Beach to be developed, starting in the 1910s, due to the development efforts of the very Carl G. Fisher who intended to develop Montauk (he built the Montauk Manor), the Lummus Brothers, and John S. Collins, the latter of whose construction of the Collins Bridge provided the first vital land link between mainland Miami and the beaches. The area has gone through numerous artificial and natural changes over the years, including a booming regional economy, increased tourism, and the 1926 hurricane, which destroyed much of the area. ‘The Last Resort’ is an interesting documentary (2018) about South Beach in the 1960s, 70s and 80s.

Taking an Art Deco tour of Miami Beach would have been helpful to fully appreciate the area’s signature architecture. The South Beach Art Deco District is a whimsical collection of more than 800 architecturally protected buildings in Miami Beach from the 1930s and 1940s. We should have stayed in one of its boutique or throwback hotels on Ocean Drive but thought that it might be quieter one block of Ocean Drive; my mistake. Many South Beach residents get around by foot, bicycle, motorcycle, trolley, bus, or taxi as the neighborhood is very urban and pedestrian-friendly. Ocean Drive is a popular tourist area and responsible for the South Beach aesthetic that tourists came for. It is also home to several restaurants (including “A Fish Called Avalon”, “Mango’s,” and the MTV-popularized “Clevelander”) and is the site of Gianni Versace’s former oceanfront mansion. Ocean Drive is about ‘see and being seen’. 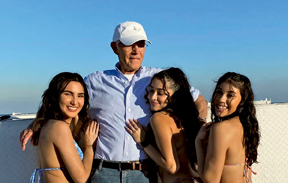 Of course we walked over to check out one of SOBE’s famous beaches. The temperature in mid January at 5pm was still perfect, the sky matching the blue of the ocean and the bright colors of the bikinis, beach umbrellas and tight European swimming trunks grabbing for attention. We watched a photographer with a group of four beautiful, young ladies in thong bikinis and when I asked if I could take a photo of the girls all wholeheartedly agreed. The girls, all over 21, were longing to be famous. My husband had a ball posing with these Cuban beauties while I remembered my younger days, before my pregnancies when thongs were unheard of.

We’d booked a room at the ‘new’ Ithaca Boutique Hotel advertised as “an oasis above the high energy of South Beach, sits 1⁄2 block from one of the most sought after vacation hot spots in the world; “Ocean Drive Sobe” — Large and luxurious rooms, walking distance from beach, shopping, cafés, restaurants, clubs and more!” Let me just say that the location turned out indeed as advertised but the noise level from a business below and the people hanging out on the sidewalk inhaling from bongs was blasting well into the wee hours was, for lack of worse words, disturbing. Our night at this 11 room boutique hotel Ithaca Miami was indeed a fully digital experience, with an entirely contactless check in, and a 24/7 contactless concierge. We’d called the ‘virtual’ front-desk so many times that we really felt for the poor people answering.

We had been advised to go for dinner on one of Ocean Drive’s side streets not necessarily for better service, but food. But we had some interesting conversations with several of the staff at these Ocean Drive front restaurants; interestingly all of them were from Argentina. However we returned after dinner once again to Miami’s hottest avenues for an exciting nighttime walk and coffee and Tiramisu. Here at the Majestic hotel and restaurant we met Antonia Thürler-Rauber and her husband Felix and their two kids, they’d come off a cruise ship and would return to their mountain home in snow laden Switzerland.

To our dismay we had to find out the next morning that there was no coffeemaker in the room. I read the Ithaca Miami hotel’s website from top to bottom and nowhere does it say that there are no coffee makers in the room or I must have missed it. During my PR career I kept a close eye on TripAdvisor ratings, this time I didn’t. If it wouldn’t have been for the little Cuban family restaurant around the corner my bucket list adventure could really have left a bad taste on my Miami memories. Puerto Sagua Restaurant on 700 Collins Ave saved the day with their hot Cuban coffee and sumptuous breakfast. Thanks for the smiles guys.