We finally got to visit the first state park in the nation to be developed, constructed, financed and operated by a private developer in partnership with the state. Still heralded today as a national model for public/private development, Stonewall Jackson Lake State Park in West Virginia was completed in 1990. The park and associated lake were a project of the U.S. Army Corps of Engineers which purchased the property to construct a flood control dam. A portion of the lake which covered the former site of Roanoke, WV, was completely flooded in over 60 feet of water and the dam put in service in 1988. Today, the state park is known as Stonewall Resort State Park. The lake and state park are named after Confederate General Stonewall Jackson, who was raised in nearby Jackson’s Mill.

As usual, I do some research on the places before we visit and had found out that the Trans-Allegheny Lunatic Asylum Museum, the Museum of the American Glass and the Mountaineer Military Museum are all located in the close-by town of Weston. Weston and Lewis County are a hub of Appalachian culture and has been a destination for vacationers for generations. I’d contacted the City of Weston through their website and received almost instantly a personal response from Kim Harrison, the Mayor of City of Weston. 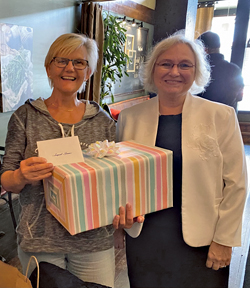 We made a plan and looked forward to meeting with her upon our arrival at her favorite restaurant, Thyme Bistro, in the historic district. As it turned out, Rod Wyman, the Lewis County Commissioner had accompanied Kim and the four of us had a delightful and delicious lunch. Chef Geoffrey’s lunch creations are superb, and the homemade carrot cake was out of this world. www.facebook.com/ThymeBistro —As we were ready to leave the Bistro the Mayor presented me, to my surprise, with a very special gift, a beautiful blue vase of depression glass; perfectly fitting for a city that is famous for its glass production and heritage. Mayor Kim, a widow like myself, is a newlywed; she got remarried this past March and we wish her and her husband the very best. www.cityofwestonwv.com/tourism

Built in the fashion of the Adirondack lodges of the 1920’s and nestled in 1,900 acres of the state’s most picturesque countryside, Stonewall Resort features an Arnold Palmer designed champion golf course, a full-service spa, boat rides, use of kayaks, plenty of hiking trails, a swim-out pool, a full-service marina, great lodges, cozy cabins, three restaurants and a stunning Adirondack style lobby! We took the elevator up to our accommodations on the 3rd floor and were very pleased with the quality of our room, the tranquil views over the water, and high speed internet access that actually worked. The first night we had dinner at Lightburn’s, featuring an incredible panoramic view of The Palmer Course, Stonewall Jackson Lake and the resort’s sprawling grounds. The Chef’s menu features both, traditional Appalachian favorites, as well as inspired creations that are as unexpected and flavorful as life tends to be! My husband had caught a stomach bug the day before and unfortunately could not partake in the smoked meat specials or my savory house-smoked chicken but the Chef was so kind to make a quick chicken soup for him instead. The service up here at Lightburn’s easily compares with what we are used to from The Hamptons; less the attitude. 😉

When it comes to hotels, I am one of those sheet snobs, and I’m happy to say that Stonewall’s sheets passed the test. After a great night’s sleep we woke up to a magical lake-hugging cloud lingering in front of our window. I got dressed quickly to take pictures from the bridge which connects the resort with the campground across the lake. The mountain air was beautiful and crisp. I breathed deep, tried to stay in the moment, inhaling the white peaceful blanket. I was looking forward to my husband finally hitting the greens after breakfast because that’s when I’d get to unwind at the Mountain Laurel Spa. I was uptight; one of our dearest friends had called us the day before with an update on a family medical situation that didn’t work out the way we had all hoped and prayed for. My spa time would be helpful in processing this news and would assist me in sending positive and healing thoughts to our friends. The Mountain Laurel Spa offers a versatile selection of organic treatments and therapies and I was looking forward to a professional body scrub. I used to get the most amazing full body Sea Salt Scrubs with Marguerita many years ago at Gurney’s SeaWater Spa in Montauk, but those were wet treatments with sea salt and seawater, and ended with a Swiss shower. —I was now looking forward to experiencing this Appalachian version of a body scrub. My therapist exfoliated my entire body with a dry apple scrub; then the scrub was rinsed off in the shower and I was rubbed down with a wonderful apple-butter cream. By the time I stepped out of the treatment room I was glowing and smelled like apple pie! www.stonewallresort.com 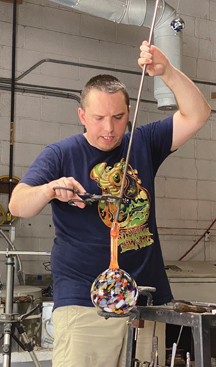 My husband who’d skipped golf due to his condition felt a little better by now and said that I looked and smelled “yummy”. We took a ride back into town and visited the Appalachian Glass working studio where Todd, a third generation glass blower, was on duty. The studio currently produces high quality mouth-blown, hand-crafted glass. “West Virginia has the raw ingredients for its manufacture… natural gas, lime, and natural sand,” Todd explained. To start the daily process, Todd Turner fills his furnace with the major ingredients that are then melted down to produce the raw glass. The furnace reaches a high of 2500 degrees during the process which he starts at night so the glass will be ready for production the next day. To produce a piece of glassware, he picks up a glob of molten glass from inside the furnace with his blow pipe. He rolls the glob to shape the piece and pops the piece back in the furnace, constantly rolling the pipe. He explained that balancing and timing are extremely important in glass blowing. To make a long, interesting visit short — we bought a beautiful hummingbird feeder, a wind chime with a glass globe and a horizontal vase for our dining room table. Thanks Todd, for a truly educating experience. www.app.glass —Weston is also home of the The Museum of the American Glass showcasing both West Virginia’s and the nation’s glass heritage and is worth your visit as well! Members of the museum continue to donate pieces of their own glass collections to support the museum and can be purchased at bargain prices. 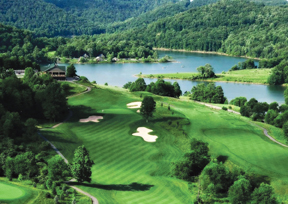 As I mentioned, my husband wasn’t really up to play golf that day but he took me on a golf cart and we rode up all 18 holes of one of Arnold Palmer’s most stunning wilderness designed courses tucked away in the Appalachian Mountains. This Arnold Palmer Signature Course grants glorious views and abundant wildlife on the shores of Stonewall Jackson Lake with elements that range from beginner to pro. The 7,149 yard layout with a slope rating of 143 tests golfers with accuracy, elevation changes and lengthy carries, has consistently ranked among the top 100 resort and public courses in America. If you ask me as a spa enthusiast — this is one of the most scenic courses I’ve seen so far. It doesn’t surprise me that this Palmer Course has become one of the best-regarded courses in the Arnold Palmer design portfolio.

Of course we had to visit Lambert’s Vintage Winery. The winery is made from hand-cut West Virginia Stone, and sits on a hilltop in Weston, surrounded by grapevines. We met the owner briefly and he was as unique as the winery itself. www.lambertswinery.com — Another interesting place we visited in Weston was the Trans-Allegheny Lunatic Asylum. This civil war-era hospital is the largest hand-cut stone masonry building in North America and was permanently closed to patients in 1994. It remains open for guided tours showcasing the building’s history and paranormal reputation. More European castle than American hospital, this former insane asylum offers historic and paranormal tours six days a week from April through October. This national historic gothic landmark holds 130 years of America’s medical history. www.transalleghenylunaticasylum.com 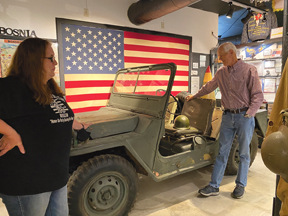 Last but not least we were transported back in time and experienced history on a whole new level! I don’t think that neither my husband or I will ever forget the war history tour we received from Ms Barbara McVaney, the Executive Director at The Mountaineer Military Museum. Ms Barbara, a retired teacher, is the loving wife of Ron McVaney who she has supported all these years in keeping a promise he made to his fallen childhood friends. Ron and his friends like many others were drafted into the country’s service and only one made it home. “I’ll never let anyone forget you guys,” Ron McVaney had vowed on their gravesides. He had collected hundreds of pieces of war memorabilia over the last thirty-five years and upon retiring he told Barbara that the time had come to share their memorabilia with the public. With the help of the Lewis County Board of Education, Lewis County Commission, and the public, the Mountaineer Military Museum became a reality. The museum features exhibits dating back to the Civil War, Korean, Vietnam, and the war in Iraq. Don’t miss it, but be sure to call first! www.mountaineermilitarymuseum.com