A Royal Escape to The Golden Isles of Georgia! The King and Prince Beach & Golf Resort on St. Simons Island!

Located along the southern stretch of Georgia’s scenic coastline are four beautiful barrier islands, St. Simons, Sea Island, Jekyll and Little St. Simons; all have attracted the country’s wealthiest families since the 1800s. St. Simons Island is the largest of these Golden Isles with about 18 square miles and we would soon find out why the island was recently voted among the most romantic destinations in the U.S. St. Simons Island (or simply St. Simons), located on the southeast Georgia coast, midway between Savannah and Jacksonville, is both a seaside resort and a residential community. The Golden Isles are about an hour from airports in Jacksonville, FL (JAX) and Savannah, GA (SAV) and from Brunswick Golden Isles Airport it’s just a 20 minute drive. 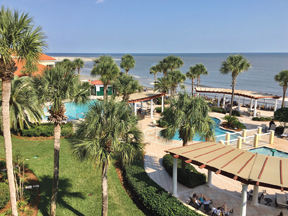 We arrived on a beautiful 80 degree, blue skied October afternoon at The Kings and Prince Resort on the ocean, that would be our domicile or for luck of better words “playground” for the next three nights. A member of Historic Hotels of America since 1996, the resort opened originally as a private dance club in 1935. Throughout World War II, the hotel became a naval coast-watching and training facility but eventually reopened to the public in 1947. The name “King and Prince” was coined by friends of the original owners, who felt it captured the property’s regal atmosphere. The historic centerpiece of the resort is the oceanfront Delegal Room, accented by 11 antique stained glass windows that depict iconic St. Simons Island scenes. 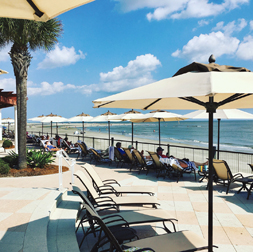 The King and Prince Resort is the ONLY oceanfront resort on St. Simons. Be it for the ocean spray trying to reach our outdoor breakfast table during high tide, or the wideness of the white sand-packed low tide ocean floor enticing us for a stroll, this is one of these rare island locations that go under your skin. — As soon as we opened the door to our accommodations on the 4th floor, our eyes were drawn to the stunning floor-to-ceiling views of the blue ocean; and when we stepped out on our private balcony, to the sparkling playground of pools below. The design of our cozy-elegant accommodations had clearly been inspired by sea, sand and sun. 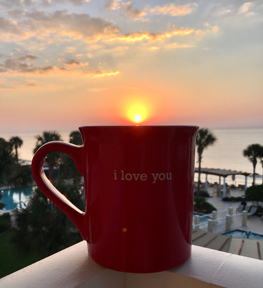 After we’d unpacked and enjoyed a cup of Starbucks coffee on our balcony we were ready to familiarize ourselves with the tropical pool complex and the beach below, but since it was high tide we decided to check out the King and Prince golf course instead. We’d made plans for me to relax on the beach the next day while my husband would be diving into his favorite sport, golf. We rode through a wonderland of magical moss-veiled island alleys to The King and Prince Golf Course. The site was once home to the Hampton Plantation, an 18th century antebellum plantation where cotton, indigo, and rice was once grown and now occupies some of coastal Georgia’s most beautiful and historic acreage. Here golf is king! Joe Lee’s tour de force design bends around towering oaks, along large areas of scenic salt-marsh, and across lakes and lagoons. Today ranking high on the list of the South’s finest, as Georgia’s passion for championship golf is legendary!

Back at the resort we quickly slipped in our bathing suits for a refreshing dip into one of the sparkling blue swimming pools before dinner. Three beautifully landscaped pools were created with the tropics in mind. Added bonus, a peach daiquiri from the pool bar can be served with an accent on magnificent ocean views, silky ocean breezes, and the lullaby of the gentle surf. We met couples and families that return to The King and Prince Resort annually, mostly for its location, but all mentioned the world-renowned southern hospitality and of that we got a first taste when we approached the front desk. In the gift shop adjourning the front desk we discovered a delightful children’s book, The Princess and The Crab, written by the King and Prince Resort’s owners for their children as a fun and playful coastal spin on the beloved princess and the frog fairy tale. Historical sites that are special to the Golden Isles are woven into this story, making it educational as well!

We were hungry and were looking forward to Golden Isle shellfish served with Georgia’s famous southern hospitality. Luckily we had made dinner reservations at ECHO. It was a busy night for the staff of this oceanfront-view restaurant, and I was ready to finally try Low Country Shrimp and Grits, a southern specialty that I had so far neglected due to the grits component. This foodie thought of shellfish and grits, or polenta as we call it north, is a big, fat faux pas. Make a long, delicious dinner story short, I have joined the long line of Low Country Shrimp and Grits worshippers, but with hesitation as not all shrimp will do. The marsh grasses surrounding St. Simons Island is supposedly related to sugar cane, which gives the local island shellfish an exceptionally sweet, delicate flavor. We don’t know if that’s true but can assure you that these are some of the best shrimp we’ve ever tasted. That, combined with a serious smoky sausage, sweet cherry tomatoes and some secret ingredients over grits are orgasmic. Southerners now recognize shrimp and grits as a staple dish in their every day diet. So much so that this part of the South is sometimes referred to as the “Grits Belt” and with more than 50 restaurants all over the island, there’s plenty to choose from for every taste. 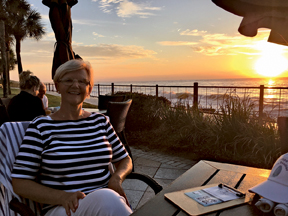 We woke up the next morning from a deep orange light spilling over our bed that turned into a sensual red as we both stepped out on our balcony together. The King and Prince, though located on the Atlantic ocean, sits on the most western spot. Oh, we were so hooked, the romantic sunrise, the passing by of shrimpers, sailboats, and freighters far off on the horizon, the sparkling pools below and the amazing low tide leaving us white, sandy islands and tidal pools to play with. I have to mention that my shrimp and crab omelette and the eye-smile of the lovely waitress made my day. As you my dear readers are realizing I could go on forever but have so few words left to tell you that there is so much more to do, especially for outdoor adventurers and history buffs like us. www.kingandprince.com 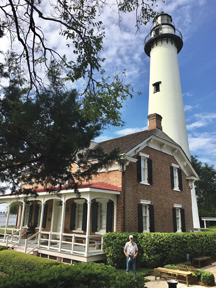 We started with the St. Simons Lighthouse and museum, located near the village and pier, easy to reach within walking distance from The King and Prince Resort. The Lighthouse and Keeper’s Dwelling were built in 1872 to replace the original lighthouse built in 1810 by James Gould of Massachusetts, the first lighthouse keeper. The original lighthouse was destroyed by Confederate forces in 1861 to prevent the beacon’s use by Federal troops during the Civil War. This Lighthouse is one of only five surviving light towers in Georgia and still serves as an active aid to navigation for ships entering St. Simons Sound, casting its beam as far as 23 miles to sea. We climbed the 129 steps up to the top to experience spectacular panoramic views of the coast including Jekyll, Brunswick on the mainland, and the south end of St. Simons. 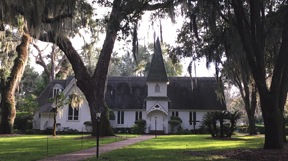 From there it was just steps along the waterfront to St. Simons Island Pier serving as the epicenter and focal point of the charming Pier Village. The Pier is said to be busy around the clock with activity, including fishing for trout, redfish, flounder, and not uncommon, sharks. We met a nice guy who allowed me to take a photo of the big stone crab he’d just pulled up in his round trap. The Pier extends out into the Atlantic causeway between St. Simons, Jekyll, and the Port of Brunswick. Huge cargo ships pass by almost daily carrying loads of autos and who knows what. We took photos of the “The Golden Ray”, a cargo ship that had rolled on its side Sept. 2019 as it was leaving Brunswick bound for Baltimore. The ship had been transporting 4,200 vehicles at the time of the accident. — Later we visited the World War II Home Front Museum, housed in the Historic St. Simons Coast Guard Station, built in 1936 where we stepped back in time to April 8, 1942 when the crew from this station rescued survivors of two American ships torpedoed by a German U-boat 13 miles off St. Simons. —Of course we had to stop for a photo op at one of the most-photographed locations of the island adjacent to Fort Frederica National Monument, Christ Church, originally built in 1820 and restored in 1884. —Trust me, the majestic ancient oaks of St. Simons Island is worth a visit alone. We got hooked, like the stone crab. St. Simons is another paradise found. www.stsimonsisland.com