This month, I’m finally going to talk about the Bald Eagle. This bird of prey has captured local attention due to its comeback to our area over the past few years. I wasn’t so quick to locate and/or photograph the eagles return when I first heard about it a couple years back, because just before moving back to East Hampton in 2010, my wife and I had just spent the previous 6 years living in the shadows of the Grand Tetons of Teton Valley, Idaho, where Bald eagles occupied the landfills like seagulls occupy ours. I also photographed them in Yellowstone for many years, so I had seen and documented Bald eagles many times. Still, I did share in the excitement that they were returning to eastern Long Island, and I was fortunate to see them in Shelter Island, Montauk, Amagansett and East Hampton without even looking for them. So, why are these birds so awesome?

Well, we all know the Bald Eagle is the national bird, but did you know it is also the national animal? Its range includes most of Canada, northern Mexico and all of the contiguous United States in between, and Alaska. Certainly it is not bald, but rather gets its name from an older meaning of the word, meaning white-headed. It’s used the same in reference to a Piebald animal (like deer), having irregular patches of two colors, usually a darker color and white. In other words, a Bald eagle is a White Headed Eagle, not to be confused with its close cousin from Asia, the White Tailed eagle.

Bald eagles, are sea eagles. They feed mainly on fish, so they are most often seen near large bodies of water; however, they nest in tall trees, so that element must also exist in their ideal habitat. Here on the east end we have it all, and more. The eagles also benefit from the Osprey, which also made a miraculous comeback to our area after almost being extirpated from DDT use in the 1960’s and 70’s. In fact, some of our local ospreys that return each year from their winter migration south, were surprised to see their nests had squatters in them this year. Eagles build the same large stick nest as the osprey. In fact, the Bald eagle builds the largest nest of any North American bird, and the largest tree nest of any animal. One Bald eagle nest was measured at 13 feet deep, by 8.5 feet wide.

Another known fact about Bald eagles is they prefer to take food from other birds or animals rather than catch it themselves. This is also a grand benefit to living so closely with the ospreys on the east end. I’m sure the osprey aren’t too pleased about that, but since an osprey is no match for an adult eagle, it generally lets the eagle have its way. After all, there’s plenty of fish in the sea, and don’t be fooled, the Bald eagle is absolutely equipped and would not hesitate to catch its own prey if necessary. Its large and deadly talons grabs tightly onto its prey, as it snatches it from the water. Its highly developed talon on the hind toe is precision-ally used as a dagger to pierce the vital area of its prey while being held tightly with the front toes and talons. The talons of an eagle can open and close at will. If a large fish drags its captor underwater, it’s because the eagle refuses to let go.

Although the bald eagles appearance is majestic, it is not the biggest eagle. The Golden Eagle is also found in the United States and is a bit bigger in size. The biggest eagle of all 60+ species is the Stellar’s Sea Eagle, with a wing span of 8.3 feet. Just a bit more than an adult female bald eagle whose wing span rarely measures over 8 feet.

Females are a third of the size larger than males, weighing between 10-15 pounds more. Its plumage is dark brown. The head and tail are most often solid white by age 4 or 5. This is also when the eagle reaches sexual maturity. The feet, featherless legs, beak (or rostrum), and irises are all bright yellow. They live 30 years in the wild, but longer in captivity due to consistent food, shelter and of course, care. Males and females are both simply called Eagles. The young are either called fledglings or eaglets. A group of Eagles are called a Convocation. An eagle’s nest is called an “eyrie”, however it’s often spelled “aerie”. 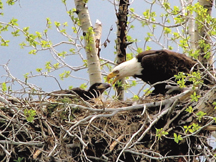 We are fortunate this year to have physically seen multiple nests with hatched young. Their reproduction cycle is also quite interesting. As earlier mentioned, the eagle reaches sexual maturity at age 4 or 5. After courtship, the female will mate for life. During the 35 day incubation period, both male and female take turns sitting on the nest, while the other catches, or swipes, food, or perches close by in protection mode; however, the female generally does most of the work. Once the eaglet begins pipping (cracking the egg from the inside) it can take the entire day for the hatchling to break completely free of the egg’s shell. Multiple eggs will hatch in the order they were laid. The eaglets will then remain in the nest for an additional 10-12 weeks until they fledge. 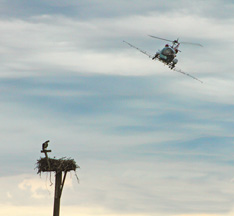 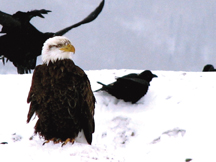 While in Idaho, I had the grand fortune to locate a tree top eyrie that allowed me a level view from a parallel hillside that sat very close. With a simple 300mm zoom lens I was able to capture a lengthy series of photographs from just above and into the nest, documenting the single eaglet’s stages of growth. Another time I remember crossing the Teton River Bridge (a small two way car bridge over the narrowest part of a beautiful river) and seeing 5 adult Bald eagles sitting on a short brace between two utility poles. In other words, it was a common sight in the Northwest. I also would see them in Wisconsin when I visited my old Submarine buddy from the Navy. I’ve been visiting him every few years over the past 30+, and have watched the populations grow significantly at Lake Peppin. It was regarded as a major comeback in a short period of time. I’ve always suspected the same would occur here once they reintroduced themselves. I think I talked about it in one of my television shows years ago, and today, I’m happy to say that I feel even stronger about my theory, and that what we’re seeing now is a great new beginning for one of our most beloved and respected animals in the United States. My only fear is…ourselves.

Here’s just another great example of why our water quality is so important, why protecting natural habitats is so vital, why toxic chemicals, pesticides, herbicides must not be used, etc. etc. Right here on the east end of Long Island we practically eliminated the osprey with the use of DDT several decades ago. Since then, our favorite fisher-hawk has made a miraculous and complete comeback, thanks to better understanding and education, better regulations and great conservation efforts. I can’t help, but ask WHY when I see a vector control helicopter spraying methoprene over an active osprey nest in Lazy Point. I hope this question and more are considered and corrected as we welcome back our most famous bird of prey.

I’d like to end this month’s column by mentioning “Sammy’ the 35 year old Bald Eagle who was stolen from the Quogue Wildlife Refuge. The eagle had a partially amputated wing and was being well cared for at this facility since 1988. It’s heartbreaking to think someone would actually do such a harmful and stupid thing. ANYONE who has information that leads to the return of Sammy or the arrest of those who stole him; I’m personally offering an additional reward of $1000.