Taylor Monte and Lorenzo DeCampos turned a senior year 15 minute film assignment into a 4 year passion for a story of struggle, strength, self- belief, hope, and love. The end result is a beautiful film that has many levels of meaning, and consequently understanding that is interpreted in a variety of ways depending on what you the viewer bring to it . 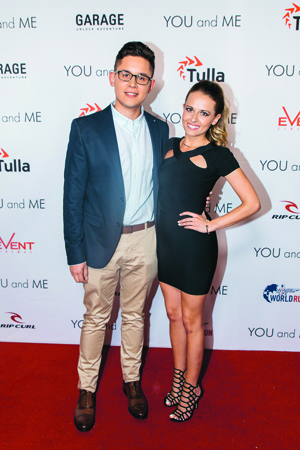 As the duo explained, they were looking for a subject for their project and a friend put them in contact with Barney Miller … after they spoke with him they were determined to see the story through despite it not being approved by the college- Australia seemed a bit too far.”We met Barney Miller in 2011 and through the great support of many amazing people, we’ve had the opportunity to not only share Barney’s story but also raise awareness for spinal cord injury. YOU and ME THE MOVIE has allowed us to learn what it takes to be filmmakers, from financing it ourselves on multiple credit cards, traveling abroad to film, to turning down steady jobs and letting go of old dreams. It has given us valuable experience in fundraising, crowd-sourcing, and gaining sponsorship and investors. Moreover, YOU and ME and Barney and Kate themselves have taught us what is possible when you follow your passion and don’t take no for an an­swer. This film has been our entire lives for the past four and a half years, but through the good and difficult times alike, we would do it again in a heartbeat. We could not be more proud of how YOU and ME has evolved and what it has become throughout the years. We’ve created something that has helped shape who we are today, and that we hope touches the lives of all who watch it as well:’ 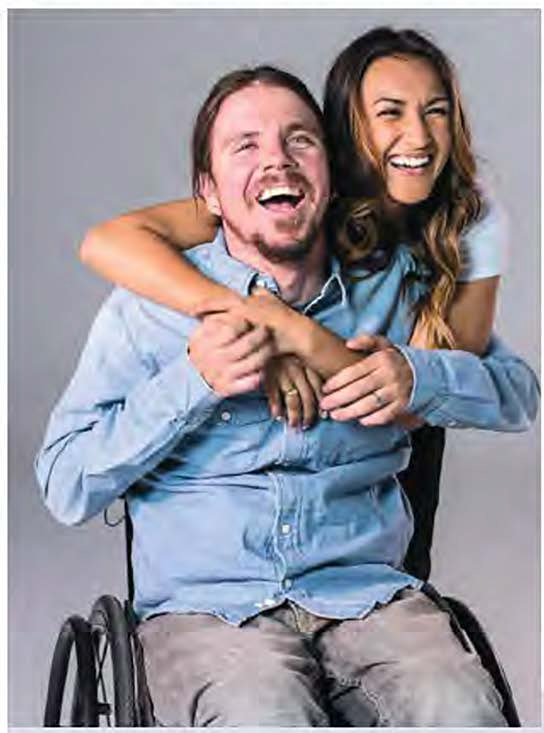 Barney an active young surfer heading for a professional surfing career suddenly, at the age of 20, finds himself a quadriplegic after a horrific car accident. Being told by doctors that he would never breathe independently or be able to use his right arm or legs again, and seeing his goals dissolve before his eyes, Bar­ney pulls from his core the strength and determination he’s always possessed, and with the support of his family he begins the long road of recovery. A chance meeting with Kate, who is described by producer Michael Lawrence as being in her own “emotional wheelchair”, and the two became inseparable. That’s where Taylor and Lorenzo come in and spend the next four years traveling back and forth to Australia taping Barney and Kate’s story as it unfolded. Speaking with Ronnie Montemarano and Paul Monte, Taylor’s parents, they couldn’t be more proud of their daughter’s dedication and determination for getting this story told. In addition, Michael Lawrence filmmaker, producer and studio owner spoke of the duo a bit like a father affectionately calling them the ‘Young twenty- something American Filmmakers’. The pair had been maxed out financially so once again they reached out to friends who got in touch with Lawrence, who after sitting with them and hearing and seeing what they planned, was in. “When Lorenzo and Taylor came to me with YOU and ME – I said yes immediately. Barney and Kate’s love story and their life and struggles will resonate with global audiences. I am very proud to be a part of it and help get their mes-sage out into the world.” At the opening Michael told me that he made the film for his daughter, saying “I want her to look up to Kate.”

Kate’s own struggles start in her childhood as the mixed-heritage child of a young mother who got pregnant while away on vacation. She never fit in with the other children in their small town, and despite the love and support of her mother and step-father, life became overwhelming for Kate who hit rock bottom and eventually moved away to start over. At the same time Barney was dealing with his own physical and emotional struggles also hitting bottom with depression and too much partying. The two meet, fall in love and eventually together become the support they each need to pull through and set goals.

She  being his physical and he being her emotional rock, Kate’s dream is to be a singer and Barney works to not only surf again, but he’s determined to stand and dance with Kate at their wedding.

The film weaves you through the ups and downs of their lives dealing with each trying situation as it unfolds. With the help and support of loved ones, Project Walk, the innovative work of Neurophysics Functional Performance trainer Ken Ware, and close friends including 3X World Champion surfer Mick Fanning, eventually Barney is back surfing, fundraising for others with spinal injury through the Barney Miller Surf Classic, and the Wings for Life World Run and is working towards his ultimate goal – to walk, run and surf standing up again.

Viewing the film on a lovely June evening at the Surf Lodge- at its LI debut with the filmmakers, Taylor’s family and friends as well as the cast- was an amazing experience. This story is told from the perspectives of Barney and Kate, as well as their friends and family; through a combi-nation photographic flashbacks- on site unfolding reality moments- and interviews, all arranged with a score of songs sung by Kate. This documentary engulfs you into the reality of the story experiencing their internal strug-gles through each raw, emotional, and even uplifting inter-view until the feelings and struggles of the subjects become personal; at different times throughout the movie I found myself and others around me wiping our eyes at the pure emotion.
In my opinion, this movie should be seen worldwide, – it’s an inspirational reminder of the fragility of life and the strength of the soul.

‘What if you knew, would you still go for the ride?’ To support the film, share:
www.youandmethemovie.com – join the word online premiere on July 2. www.garageentertainment.com.au