The name Martha Clara is a tribute to Robert Enternmann’s mother. Robert is one of the grand­sons of the fonder of Entenmann’s Bakery. After the family decided to sell the family business 1978, Robert purchased and transformed a potato farm into a thoroughbred horse racing operation. With the changing landscaped on the North Fork, he started a vineyard with only 1 acres of grapes, eventually expanding to over 100 acres. I n 1999 he opened the doors to his new businesswoman Martha Clara Vineyards. In the 2015 competition season, Martha Clara Vineyards received the most accolades in multiple categories, deeming them the most awarded winery on Long Island. 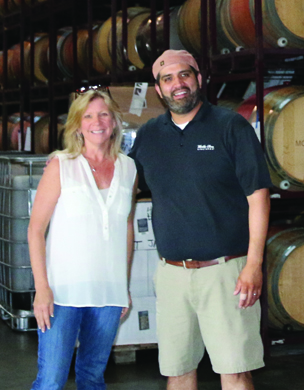 On a lovely afternoon in June, we had the pleasure of meeting with Juan E. Micieli-Martinez Executive Winemaker for the Martha Clara Win­ery. Juan grew up in Manorville, attended Binghamton University studying chemistry and psychology and while there had his interest in wine peaked by a friend. He took a summer job in a testing room at Pellegrini where he also did work in the lab and worked the harvest. After the experience he received and eventually buying text books and independently reading, along with his chemistry background and experience with good wine makers who shared their knowledge, Juan knew this was what he wanted to do. By 2000 he wanted out of the tasting room and into a cellar. He became the brewer for the South Hampton Public House but by the fall of 2001 he went back to wines with the Premium Wine Group. The winter of 2002 he did a Harvest season in Australia and came back to LI as a wine maker@ Pelligrini until 2005. In 2006 he was the Head Winemaker at SHIN and fi­nally in 2007 he moved to Martha Clara and is presently on his 9th vintage. 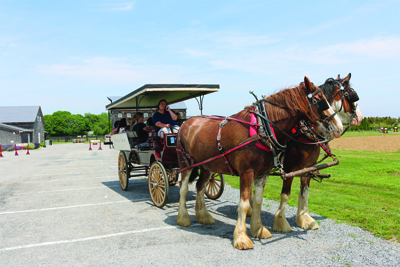 Obviously extremely knowledgeable about wines and the entire wine making process, Juan walked us through the Martha Clara production warehouse and instilled his expertise upon us. While discussing fermentation, he mentioned that depending on the grape, the process can range from 4-6 months up to 26-30 months. “Wine is a patience game! Beer is more instantly gratifying:· He pointed out.

Through our discussion with Juan, we also discovered a few additional interesting facts. Laura Escobar­Lyons, part owner of the West Lake Fish House here in Montauk, designed a few of the Martha Clara labels in­cluding the Solstice. Utilizing his knowledge and charm, Juan hosts a You-Tube weekly video: M.C.U. Farm Newsduring which he discusses Martha Clara and East End news for about 1-11h min/week. He is also on the LI Wine Council Board, the LI Farm Bureau Board and President of the LI Merlo Alliance.

I asked him about LI wines in comparison to California wines, and the opinion of some that the LI wines can’t stand up to them. He told me that in 1974 when vineyards started on LI there was a diversity of experience among vineyard managers and winemakers. “LI like NY is a melting pot of international, national, and local winemakers·: he said noting that “LI wines are younger, as were many of the winemakers:· In addition there’s a uniqueness in the soil and climate on LI. “Our wines reflect the terroir from which they are grown,” Mr. Micieli-Martinez said. “We are a maritime climate which provides the perfect balance between land and sea. This balance can be seen in the relationship of flavor and acid in our well-structured wines. The great acidity due to the weather, works well for food pairing:· He continued by explaining that with time and experience, now the winemakers have honed in on their Craft; “The makers and the vines have aged and we are doing what we do better now:· He added.

In an attempt to bring the focus on the LI Wine Country back to the Wines, Juan has stopped the live music on weekends at Martha Clara. Initially, the entertainment was offered with free tastings to draw people to the area. Now many of the vineyards are looking to appeal to wine appreciators and to raise the level of hospitality. For example, Martha Clara has introduced table service for a more personal wine tasting experience as an alternative to standing around the wine bar. Juan’s goal is to deconstruct the old reputation and eventually begin to infuse the vineyard with music conducive to the whole wine tasting experience.

They will however continue to hold special musical events, including Wine Down Wednesdays from 6-9pm all summer- www.marthaclaravineyards.com and the Fold Festival in August presented by Nile Rodgers featuring artists like Keith Urban and Duran Duran . From wine education classes lead by their Winemaker and General Manager, Juan Mi­cieli-Martinez, to the Fold Festival Martha Clara is one of the most progressive and evolving vineyards on the North Fork. 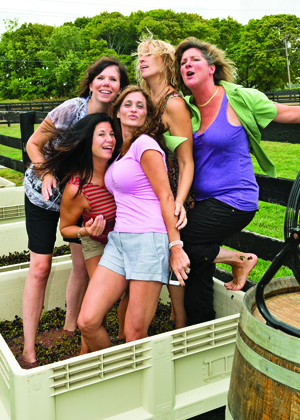 Martha Clara Vineyards, resting on 200 acres of boundless land, is one of the most unique and exquisite wineries on Long Island. At the tasting room with Gina, we enjoyed the new table service for our flight. There are 4 flights offered consisting of 5 varieties, a mixture of reds and whites.As well as some special wines and a light snack menu to enjoy with your tasting. Each wine is served with a detailed explanation of the grapes and fermentation process. I found that sitting at an individual table really changes the wine tasting experience making it more intimate and relaxed. Some of our favorites were: the ’13Estate Reserve Chardonnay- oak barrel fermented resulting in a smooth, creamy taste; the ’12 Cab Franc with a palate offering soft tannins and notes of cola and Madagascar vanilla beans with hints of toasted cedar, the ’12 Merlot medium bodied with firm but silky tannins, which lead to flavors of black cherry and cigar box and offering great length on the finish, and the ’12 Cabernet Sauvignon with Notes of can­died pomegranate and cassis with hints of chocolate dipped raspberries on the nose.

As we sat enjoying each wine our view of the grounds was beautiful. The horse drawn carriage passing in the fields, people enjoying the sunshine at the terrace tables or at the outdoor wine bar, and the wine club barn out beyond the terrace area. In addition to the outdoor area, the vineyard offers a spacious indoor seating area, a tasting room with a large wine bar, as well as a store to purchase the wines, snacks, and some very unique themed gifts.

Visiting the North Fork affords one a variety of activities, the Martha Clara Vineyard is a must-see on the list of stops for visitors of Long Island Wine Country.