While Montauk is far from Fiji, Hawaii and Tahiti, modern east coast surfers have a knack for simultaneously owning and paying homage to the roots of surfing.

While some in the line-up fancy themselves as ‘Montauk Royalty,’ the first famous boards were created for actual Hawaiian Royals called ‘Olos’ or Olo boards and could measure up to seven-meters long and maybe weigh over a hundred pounds.  Boards were thinner than today’s long boards and were made of solid wood.

Polynesian surfers began popping up on boards around 1500 B.C. and “Wave Sliding”, or surfing, was documented in the 1700’s by Captain James Cook in Tahiti, and later appeared throughout Easter Island (Rapa Nui), New Zealand, Micronesia and Hawaii.  In the 1900’s surfing was observed along the western coast of Africa and in Peru.

Hawaii, specifically Oahu is now crowned the epicenter of surfing, followed by Kauai and Maui, with Mainland and European tourists discovering the sport in the early 1900’s.  It was not until Duke Kahanamoku, Olympic gold-swimmer brought surfing beyond Hawaii to the mainland United States and Australia.  ‘Hopupu’ is said to mean ‘being high on life,’ particularly when surfing, a mantra linked to surf culture that followed in the mainland along the California coast. 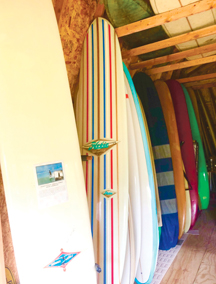 Once surfing was a true international sport, shaping boards emerged as a crucial component and ritual of surfing that it remains today. While now we swipe a credit card instead of selecting a tree to manufacture a board, we continue to connect the shaper to the past through the board.  The value in knowing your shaper like Mike Becker from Nature Shapes, respecting the rugged operation at the Channel Islands headquarters in Carpentaria California with Brit Merrick at the helm, or feeling the shock heard around the world when Clark Foam went out of business shows how revered shapers remain.

Most impactful of the evolution of surfing is the awareness surfers share of the ecosystems in our oceans.  Wetsuits grew in popularity for several reasons, including to protect coral bleaching from sunscreen.  Wearing a wetsuit instead of a swimsuit reduced the amount of sunblock a surfer needs in the water.  The need to monitor our beaches for litter and plastics, prevent threats of pollution, halt toxic run-off and sewage are gaining awareness thanks to surfing and the attempt to keep our aquatic environment safe and pristine.  Perhaps surfing has come full circle, you may even see a wooden board in the line-up.  Aloha.