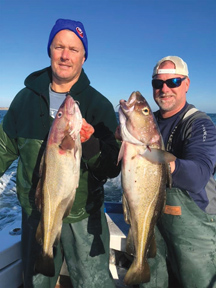 Still some good bottom fishing, just have to wait for the wind to quit or at least calm down enough make it bearable.This 2019 Blackfish (Tautog) season was nothing less than fantastic. Plenty of action, with limits being caught on a regular basis. The Highway Artificial Reef over on the Connecticut side was very productive, when you could get there. Fisher’s Island on both sides was very good as well. Just about any historical Tautog rock piles were producing.

All good thing must come to an end though, Tautog season closes on December 9th. All in all there can’t be many complaints this year.

Thankfully we still have the Porgy and Black Sea Bass south of Block Island thanks to the warmer conditions, the colder it gets they’ll start moving further offshore. But for now the action is still holding up. There has also been some scattered patches of Codfish around the reefs south of Block Island. Historically towards the end of December the Cod would show up following the Herring run. They would hang around for the month of January and then start thinning out come February. So far there has been a few being caught, so let’s hope for the best! 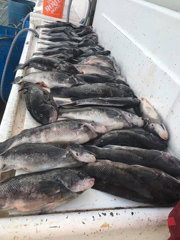 Overall the 2019 season was pretty action packed, both inshore and offshore. The Striped Bass were a little elusive at times, but the massive showing of juvenile Striped Bass was a great indication of how resilient they really are. New regulations regarding the Striped Bass are in the works right now. 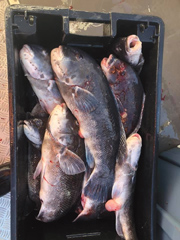 They definitely need a break, because when the pressure is reduced on the Striped Bass they come back like gangbusters. Just exactly what measures the National Marine Fisheries Service and the New York Department of Environmental Conservation are going to take is still up in the air. Just hope that they realize that a lot of people’s livelihood rely on this species. Proper decisions must be made for both Fish and Fisherman!

Hope everyone had a good Thanksgiving. Enjoy the rest of an amazing fishing season.