From Rome to the Rotterdam…docked in Civitavecchia!

Cruising makes it easy to visit several places without having to repack your bags because your hotel room (cabin) comes along with you, and even provides all the transportation. Holland America offers traditional 7-day Atlantic crossings, as in our case packed in a 32-day cruise from Rome that would take us all over the Mediterranean, the Holy Land, Morocco, and finally home across the Atlantic Ocean to Florida.

We’d planned to kick our 40-day adventure off in Rome and then would board HAL’s Rotterdam 4 days later in Civitavecchia. — Our accommodations in Rome I would consider as mediocre (I am supposedly a snob), but the location within walking distance to what most tourists like to see, was priceless! We had booked a few guided small group tours in advance like the Forgotten Catacombs and Bone Crypts tour with AirBnB. Sean, our guide, took us into Rome’s underground where we learned about past burial customs and the secret Christian worship spots of historic Rome and then to the Capuchin Crypt Museum where we got to admire Caravaggio’s famous St Francis in Meditation painting and learned about the Capuchin monks who used human bones to build and decorate their crypt. Trust me here, I got chills right into my own bones. 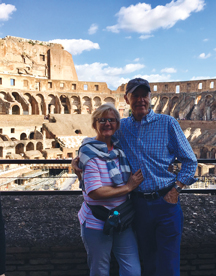 During the Coliseum & Old City Tour with Andre we were able to dive with our small group into the Coliseum’s fascinating 2,000-year history. We walked the walk of gladiators and doomed prisoners and sat on the very seats where the ‘bloodthirsty’ audience watched gladiator battles, choreographed ersatz battles and exotic animal parades.  Andre captivated us with gruesome details of the gladiatorial fights and their merciless slaughterings. The Romans prided themselves on their engineering skills, and the Coliseum served as the magnificent masterpiece that paraded their craftsmanship. Unlike other ancient theaters, the oval-shaped, freestanding amphitheater was a Roman invention. However, arguably more important was the control prearrangement of the wild animals –one of steady attractions of the Coliseum. And, that is where the famed hypogeum (underground chamber) came into the picture. With its intricate 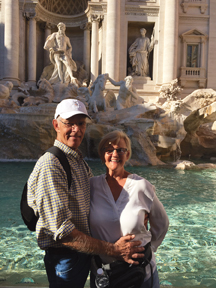 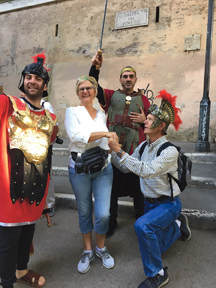 double-leveled underground system of cages and tunnels that housed animals and gladiators alike. These spectacle ‘participants’ were directly brought to the upper ground level arena via elevators, an effective design scope that had been showcased in a cinematic fashion in Ridley Scott’s ‘Gladiator’. The hypogeum was also used for the purpose of stretching expansive awnings over the open sky of the amphitheater. Actual sailors, who were specifically recruited for the job, operated these complicate systems of pulleys, canvas  and ropes.  Andre took us also to the Roman Forum in the nearby Old City as well as Caesar’s Palace on Palatine Hill. Here surrounded by ancient palaces, temples, tombs, the House of the Vestal Virgins, and the Senate house we completed his fascinating tour at the tomb of Julius Cesar. 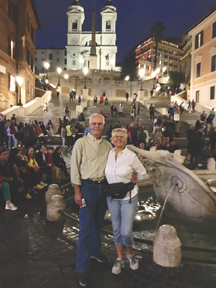 During the After Hours in the Vatican tour we were able to avoid the heat and huge day crowds during the day and got to experience the Vatican Museum and Sistine Chapel at night. Here we got to admire ancient Egyptian, Greek, and Roman sculptures, Renaissance masterpieces and of course the Vatican’s crown jewel: the Sistine Chapel. Our visit also included a live orchestra performance in the Renaissance courtyards of the museum. Alessandra, our guide, was extremely knowledgeable, and truly enthusiastic.

It was mid-October and because we had perfect weather we were able to explore many other parts of Rome on our own on foot. Like children, we eagerly discovered the famous Trevi fountain, the largest Baroque fountain of Rome and probably one of the most famous fountains in the world, especially after Anita Ekberg bathed in the fountain in the Fellini movie La Dolce Vita. And also of course, the Fountain of the Four Rivers (Fontana dei Quattro Fiumi) located at the center of the beautiful Piazza Navona, which was commissioned in 1651 by Pope Innocent X, whose family palace, the Palazzo Pamphilj, faced onto the piazza. Here in one of the little restaurants we had a romantic Italian dinner for 2 under the stars. One night we hung out on the staircase above the Fontana della Barcaccia, on Piazza di Spagna.  Designed by the father of the famous Bernini, Pietro Bernini, the fountain was commissioned by Urban VIII in 1629 to commemorate the flood of 1598. The form of the fountain is supposed to express the idea of a boat stranded in Piazza di Spagna during the severe flood of the Tiber. There is so much more the write about Rome and so few words to express how much we loved the sides, the food, the well dressed locals and the hype. However, in anticipation of our upcoming 32-day cruise on the Rotterdam, the first cruise of such a length for us, I didn’t cry when a mini bus arrived that would drive us to Rome’s deep-sea port of Civitavecchia, otherwise I would have. Rome is one of these places that gets under your skin.

It took us a good hour from our hotel, somewhere by Villa Borghese Parioli, to get to the port of Civitavecchia, known since ancient times as the Port of Rome and built by command of Emperor Trajan between 103 and 110 AD. A few of the uniformed crewmembers were lined up at the gangway in anticipation of welcoming these new arrivals on board. Our ship the Rotterdam, was built in 1997 and is the lead ship in Holland America’s R-class. With her wide teak decks and classic lines it’s obvious that she was designed with seasoned travelers like us in mind.

Until next month from The Rotterdam all over the Mediterranean!